Tara Krishnaswamy is a computer scientist as well as an engaged activist. She has a deep interest in civic and political issues and has been conscious of the unequal status of women in India from a young age. Krishnaswamy’s experiences and previous engagements gave her the confidence to initiate the non-partisan movement Shakti.

Shakti is a unique initiative bringing together Indians from various backgrounds to promote female representation in the Parliament of India and the State Legislative Assemblies. The movement started at the end of 2018, as a strategic effort to build public engagement by running campaigns during the Indian general election in 2019. In an attempt to raise the engagement of politicians, mass calls were made to both men and women in politics urging for an increased number of women candidates in the general election.

After the general election last year, the proportion of women in parliament increased to a record high of 14 percent. Even if Krishnaswamy admits the result was better than expected, she emphasises the need to continue the fight.

– There is nothing systematic that will ensure that women’s representation will continue to rise. I’m saying this because if we don’t fight, it might just drop next time. So we are lucky, but we can’t count on luck. We have to continue to ensure our luck, says Krishnaswamy.

Krishnaswamy highlights that the gap between the constitutional promises to women as equal citizens and the reality is huge. This is reflected in the disproportionately large portion of men in politics.

With Shakti, Krishnaswamy is advocating for increased fairness in politics. While pointing towards the current political situation in India, she mentions the unequal gender balance among candidates.

Shakti has received consistent support from the general public, media and women in politics. Krishnaswamy shares that while powerful male politicians have the capacity to drive change, they often lack the willingness to take action in order to improve the gender balance.

Shakti’s campaigns include protesting, petitioning and pressuring politicians and key decision-makers. According to Krishnaswamy, a lot more has to be done to improve women’s situation in India.

Josefine is a master's student in International Development and Management (LUMID) at Lund University. She recently returned to Sweden after spending the past years travelling, working and studying abroad. India has a special place in her heart, partly due to the delicious veggie food. 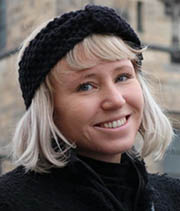