The use of iris scans is now becoming a regular practice in UNHCR’s registration activities. Photo: Gerd Altmann/Pixabay

In 2015, UNHCR began rolling out the Biometric Identity Management System (BIMS), which collects photos, iris scans and fingerprints of refugees. They are stored in the organisation’s digital Population Registration and Identity Management Ecosystem (PRIMES), which not only includes BIMS, but also comprises all of UNHCR’s digital registration, identity management and case management tools. The need for reliable, effective and transparent registration systems is underlined by the fact that in 2019, 70,8 million people were displaced. 25,9 million of them were refugees. Globally, nearly one person is forcibly displaced every two seconds. The use of biometric data could have the potential to serve these people’s needs, considering that the ability to verify identities is a matter of human dignity.

However, it is crucial to also shed light on the failures of UNHCR to uphold these principles and protect refugees accordingly. The use of biometric data collection rather shows that refugee registration extends the power of the state in rendering refugees’ lives more intervenable. In late 2018, Rohingya refugees in Bangladesh engaged in a hunger strike against the UNHCR’s proposal to issue smart cards identifying them as “forcibly displaced Myanmar nationals” instead of “Rohingya”. One reason for the strike was the fear that data would be shared with the Myanmar government, which has a history of systematic discrimination against the Rohingya. Thus, instead of offering protection, this high-tech tool puts refugees’ lives at a higher risk.

The role of informed consent is also a highly contested issue. Although UNHCR emphasizes the importance of informed consent and full transparency, an internal audit by the UN in 2016 revealed a lack of protection and risks related to tampering, loss and misuse of personal data during registration processes in India, Thailand and the Democratic Republic Congo. It has also been argued that insufficient and intransparent information was shared with the refugees in these countries.

In order to address the detected flaws in UNHCR’s practices, technology has to be used in a responsible manner and has to be human-centred. This also includes the integration of refugee registration activities into existing legal frameworks. Particularly in times of crises and emergencies, people’s lives must be protected and not be put at further risk through data misuse and enhanced surveillance.

Donya Zikry is a Master’s student in International Development and Management at Lund University. She is particularly interested in issues surrounding education, digital development and the MENA Region. 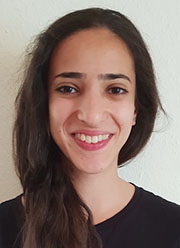