There is a strong women’s movement in India. Men’s participation in the movement is, however, still limited. In order to successfully work with gender equality, the women rights organisation Grameena Mahila Okkuta is educating men.

Venkateshappa and Ramamurthy live in different villages in Karnataka, southern India. They do not know each other but they have something in common: their engagement in Grameena Mahila Okkuta, a women’s rights organisation working towards gender equality.

– If families in the village become more equal, they would live a happier life, says Venkateshappa.

Grameena Mahila Okkuta (Women’s Rural Network) has been operating at grassroot level in Karnataka since 1997 and became a partner of the Swedish civil society organisation The Swallows India Bangladesh in 2016. Okkuta has recently taken a new approach to their work with the purpose of getting men involved in gender equality issues. By  focusing on education for men, Okkuta wants to stop damaging gender norms from reproducing. The patriarchal structures are strong in India and even though there are laws against discrimination based on gender, the implementation is missing in many parts of the country.

Venkateshappa and Ramamurthy have participated in trainings on the social and legal aspects of gender equality. Venkateshappa explains that he, before the training, just had a mindset that women and men should be equal; now he has learned methods that he can use to actually make a difference in the village. Ramamurthy describes that women often have restrictions put on them, restraining them to the home and village. He believes that men should be involved in the gender equality movement so that women feel that they have men’s support, which could  motivate more women to become involved.

– We can support women so that they can move forward in society, says Ramamurthy.

An outspoken challenge is the lack of knowledge about gender equality, especially among men. Venkateshappa says that it is hard to make people listen to him, but whenever he finds someone who does listen, he introduces them to Okkutas gender equality programme. If he can make other men more aware, they will in their turn share their knowledge which is how things will change, says Venkateshappa. Ramamurthy identifies similar challenges.

When he speaks to the public, many people respond with negative  comments saying that he does not have anything better to do and that he should “stop the nonsense”. However, these comments do not stop Ramamurthy as he continues to spread awareness. Venkateshappa and Ramamurthy both describe a vision of a society where women and men are equal.

– When men participate, the progress of gender equality will reach its fullest potential, says Venkateshappa.

Linda Zetterström was on an internship at Svalorna India Bangladesh during four months. The organization collaborates with local organizations to strengthen the rights of marginalized groups in society. 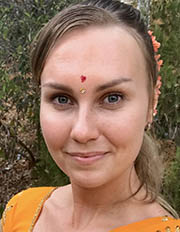