The world’s addiction to fossil fuels is the main contributor to the climate crisis, and it impacts peace and security worldwide. This was clearly demonstrated in 2022 by Russia’s invasion of Ukraine. But why is it so difficult for nations to move away from fossil fuels? Part of it can be explained by the so-called energy trilemma, according to Marie Stjernquist Desatnik, Senior Climate Policy Advisor at Naturskyddsföreningen (the Swedish Society for Nature Conservation, SSNC). She argues that transitioning towards renewable forms of energy is essential to achieve human security worldwide.

The outcome of COP27 in Sharm El Sheikh in November 2022 further showcased the fossil fuel addiction by once again in the final document, the Sharm el-Sheikh Implementation Plan, failing to address all fossil fuels (oil, gas and coal). The document solely mentioned a phasedown of unabated coal power and a phase-out of inefficient fossil fuel subsidies.

The global energy system is highly dependent on fossil fuels, as it supplies around 80% of the world’s energy consumption. Fossil fuels are used to produce electricity, in industry, for heating and transport. Thus, contributing to essential services within our societies. However, the extraction and burning of fossil fuels is the largest contributor to climate change, representing over two thirds of global greenhouse gas emissions. Despite falling prices for renewable energy technologies, governments around the world continue to spend hundreds of billions of USD on fossil fuel subsidies annually.

At COP27, it was decided that a Loss and Damage fund should be created. For this fund to be of value, governments will need to mobilize hundreds of billions of USD to pay for the damage caused by the effects of climate change. Hence, treating the symptoms rather than the disease. How did we end up here?

There has been a strong link between fossil fuel consumption and economic growth since the start of the Industrial Revolution, and a small number of countries in the global north are historically responsible for the largest part of greenhouse gas emissions – generated by activities that have allowed these countries to build strong economies and resilient societies (in some cases). These societies are now better equipped to deal with the impacts of climate change. Paradoxically, those least responsible for climate change are those suffering the worst from its consequences. These consequences bring severe impacts on health, livelihoods and safety.

It is not fossil fuel consumption per se that is the key to societal development, but rather energy consumption. Energy is absolutely critical for societal and human development and nations today are faced with the Energy Trilemma; how to achieve energy security, energy equity and environmental sustainability. It is formulated as a trilemma because of the complexity of achieving all three challenges at the same time, although it is absolutely crucial that they do.

Currently, at the start of 2023, many nations are struggling to deliver on the energy trilemma, partly or largely exacerbated by Russia’s invasion of Ukraine. Countries in Europe, the US and many more struggle with security of supply in order to replace Russian oil and gas, as well as affordability with soaring energy prices during the winter. When countries should be moving to green alternatives, we see a trend of turning to traditional fuels such as coal – which is challenging for the environmental sustainability.

The invasion has shown the vulnerability of fossil fuel dependency which the International Energy Agency (IEA) refers to as the world being in the midst of its first global energy crisis. This has been felt all over the world with soaring energy prices and it has also contributed to the global hunger crisis. The IEA also states that “faster clean energy transitions would have helped to moderate the impact of this crisis, and they represent the best way out of it”.

Yet, what we tend to see is that countries prioritize energy security first, equity second (for political stability), and environmental sustainability last. In the past few months, countries in Europe have increased their coal consumption to replace Russian oil and gas, and it was projected to have increased by 14% in 2022. At the same time, electricity prices have sharply increased across Europe. This affects households, especially low-income households, who tend to use a much higher share of their disposable income on energy, as such risking energy poverty across Europe this winter. It is therefore no surprise that energy equity and affordability has become a widespread political debate. This was evident in the Swedish election in September 2022, as parties promised fossil fuel subsidies and cash handouts.

The consumption of fossil fuels is not “only” a concern for climate change and the future of the planet. It is also a threat to peace and security here and now. The link between fossil fuel exploitation and war, so called oil wars, is one of the most well studied types of conflicts. Oil exporting countries are to a higher degree involved in armed conflicts. Examples of this include Angola, Iraq, Nigeria, the Democratic Republic of Congo, and most recently – Russia. Yahia Said et al. point to various explanations in their book Oil Wars, for example that oil exporting countries typically do not have diversified economies. This explains some countries’ reluctance to mention oil in the COP27 final document, as oil production requires significant investment, but little labor. It is an activity that has little spillover effects on the rest of the economy. This means that, depending on the type of state, few people will benefit from the wealth associated with oil, which can lead to social and political tensions. Another aspect is that oil prices fluctuate and are therefore not a reliable source of income. Furthermore, it is a finite resource which affects not only equity between producers and consumers but also intergenerational equity. Researchers at Uppsala University add to this picture by pointing out that oil exporting nations are “allowed” to go further with an aggressive foreign policy before other countries intervene, as countries are dependent on fossil fuel imports from the country.

Russia is highly dependent on fossil fuel exports and the EU has been highly dependent on these imports (see images), which is why there was initially reluctance from e.g. Germany to include gas in the sanctions. The political leaders knew that this would affect energy security and equity back home, and ultimately, political stability. Russia’s dependence on fossil fuel exports has been a key in building its military and financing the war against Ukraine. Russia has also deliberately targeted energy infrastructure, especially the electricity grid, in order to weaken the Ukrainian citizens’ resistance. Targeting a country’s energy security is an effective way of weakening and destabilizing a country.

Renewable energy technologies have their associated risks and challenges, for example related to the minerals they depend on. However, they offer many benefits regarding the energy trilemma, such as security of supply, affordability, and low climate impacts. Transitioning to renewable energy also means that countries would be less dependent on fossil fuel exporting autocracies, and hence, would stop contributing to financing their militaries.

The Energy Trilemma signifies the complexity of how to achieve energy security, energy equity and environmental sustainability at the same time.

Marie Stjernquist Desatnik is a Senior Climate Policy Advisor at Naturskyddsföreningens (SSNC’s) International Department . She works on topics related to human rights in the context of climate change and the energy transition. She previously worked as a climate consultant in the private sector and prior to that on energy access in displacement settings at a UN organisation. She holds a Master’s Degree in Sustainable Energy Engineering from the Royal Institute of Technology in Stockholm. 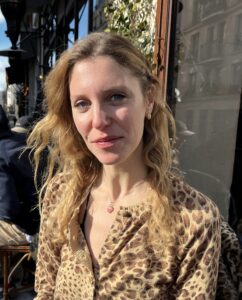