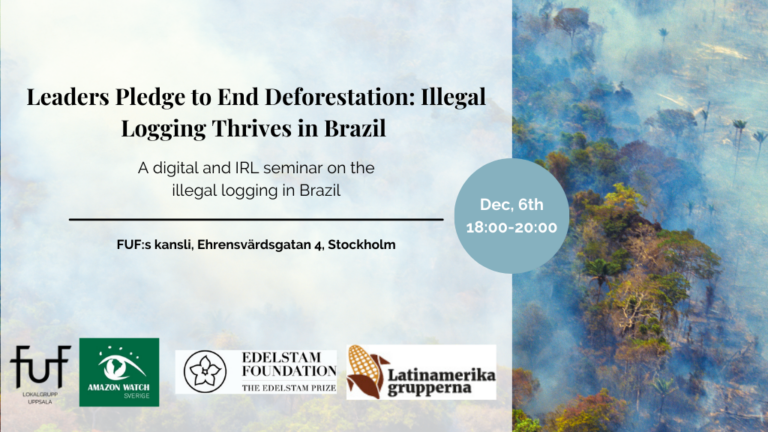 During the UN Climate Change Conference, over 100 leaders promised to end deforestation. However, deforestation rates are rapidly increasing in Brazil. Illegal logging has become widespread and criminal logging networks threaten or even kill people who object or try to stop their actions. According to the Pastoral Land Commission, there were more than 230 cases of fatal attacks related to illegal logging reported in the Amazon region between 2010 and 2020.

Deforestation has devastating environmental consequences in terms of mitigating climate change and protecting biodiversity. It also has socio-cultural and economic consequences for people dependent on the forests. Will world leaders keep their promise to protect the Amazon Rainforest and its people? How can we act in terms of global responsibility?

FUF Local Group Uppsala together with the Edelstam Foundation, Amazon Watch Sweden, and Latinamerikagrupperna invites you to a seminar on illegal logging in Brazil to have a conversation on global responsibility.

Due to a limited number of seats, seats will be reserved on a first-come-first-served basis. Register by sending an e-mail to: ceremony@edelstamprize.org

Seven speakers will give a short presentation, after which there will be a panel discussion with an opportunity for the audience to ask questions. The seminar ends with an opening ceremony for the Edelstam Prize 2022.

Nik Märak, former President of the Sami Association of Stockholm

Parul Sharma, Human Rights Lawyer with a focus on Sustainable Development and member of the Edelstam Prize Nomination Committee