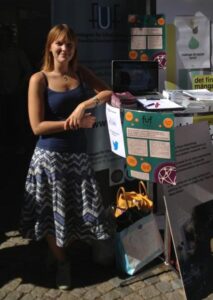 When and how did you get involved in FUF?
I started getting involved in FUF in 2008/2009. At that time, the student groups, as they were then called, were a relatively new phenomenon at FUF. Among other things, I was involved in starting up a collaboration with CinemAfrica, wrote the FUF magazine and was involved in various ways between other jobs, internships and courses. In 2011 I got the job as head of office at FUF.

What issues were you passionate about and thought were important during your time at FUF? What issues do you consider to be the major development issues at that time?
As head of the office, I thought it was important to improve FUF organizationally, stabilize the economy and increase the number of members and active members. I also thought it was important that more and relevant ways were created for students and young adults to get involved in FUF, that they themselves got more out of their involvement and that FUF's younger and older members met. Thematically, I thought it was important that it was the members, especially those active in the student groups, who set the agenda and chose which issues would be highlighted. Personally, the development in many East and South African countries was close to my heart, as well as environmental and climate issues globally. I don't know if they were the stfirst questions at the time, but development issues on the table in Sweden were, among other things, whether or not the results agenda should be, as well as evaluation of and the future of Policy for Global Development (PGU).

Do you want to share a memory from your time at FUF?

I have many strong memories from the time when FUF's office was in the very special house with a glass roof in the courtyard on Karlbergsvägen. We often filled the room to capacity with committed students and seminar attendees and did our best to fix the lack of oxygen that often arose by practically always having the only door available standing wide open. I also have many fond memories of incredibly fun work with colleagues at the office. I is still today surprised at how, through pure learning-by-doing, we managed to build websites, learn to live-stream and start up an entire Almedal editorial office. Including!

What do you think is FUF's strength?
The people! FUF has a completely unique member base with both experienced and knowledgeable members older members and curious and driven younger members; and within both groups many who really have a genuine commitment and invest time and energy in making FUF a good organization with good content.

What do you think FUF should focus on going forward?
To continue to create activities that attract people of all ages with an interest in global development issues. It has been a winning concept for 50 years and will be for another 50 years if we all take care to manage the organization well.