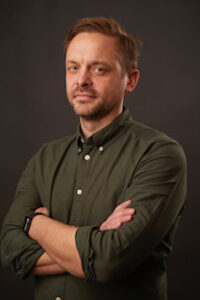 When and how did you get involved in FUF?
I started getting involved in FUF when I was studying economics at Stockholm University. At first I was a non-profit writer for the FUF-bladet and then I was hired to run the site Biståndsdebattens.se, which I started together with other FUF members to monitor and make available the Swedish debate on aid. It was when, on behalf of the FUF-bladet, I was going to write a summary report about the then fierce Swedish aid debate that I saw the need for a site that factually and neutrally collected the scattered debate in one and the same place. FUF made it possible.

What issues were you passionate about and thought were important during your time at FUF? What issues do you consider to be the major development issues at that time?
What drove me was the desire to show how simplistic the debate on this important area was, and to try to provide a platform that allowed academics and practitioners to contribute to the public debate. This is because many with knowledge of the aid refrained from participating in the debate, which they perceived as overly generalizing and sometimes frivolous. Through Biståndsdebatten.se, FUF was able to encourage and support actors to participate in the debate who otherwise would not have done so.

Do you want to share a memory from your time at FUF?
My favorite memory from FUF is when Gunilla Carlsson (M), after her stormy years as minister of aid, came and met a small group of non-profit FUF students and had to answer questions about everything from her controversial actions to personal path choices. It was a personal and exciting conversation without cameras and notepads. For me, who watched the debate for several years, it was almost therapeutic to be able to question the heated agenda-setters of the debate.

What do you think is FUF's strength?
FUF's main strength is being a meeting place for young and old who are interested in one way or another in global development and Sweden's role in the world.

What do you think FUF should focus on going forward?
I think that FUF should continue to be a meeting place and forum for inclusive and factual debate, not least about Swedish development cooperation.