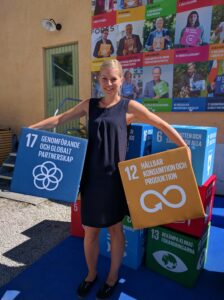 ​When and how did you get involved in FUF?
I started getting involved in the editorial staff of the FUF magazine in 2012. At that time, I had just moved to Stockholm to study my master's in political science and international relations, but quickly felt that I lacked the connection to developing countries and development issues. That's why I applied to FUF. As a writer for the FUF magazine, I not only got an outlet for my commitment to development issues, but also learned a lot about journalistic writing and from other activists who also became the beginning of my network within the industry. Since then I have been part of the FUF's Almedalsredaktion several times, reported from Nepal as a FUF correspondent and been part of the Young Professionals network. In 2014, I was elected to FUF's board to, among other things, strengthen the perspectives of the young non-profit active in the board work. I am now in my second year as chairman and continue to be challenged and develop in my FUF involvement.

What issues were you passionate about and thought were important during your time at FUF? What issues do you consider to be the major development issues at that time?
I found questions of political consensus to be particularly interesting, that all policy areas must contribute to sustainable development. Sweden's policy for global development (PGU) celebrated 10 years and the government that took office in 2014 launched a new start for the PGU. Through FUF, I became aware of the problem of tax evasion from developing countries. The non-profit seminar group arranged a FUF chair on how large resources disappear from developing countries due to corporate and individual tax evasion and aggressive tax planning. That flow was estimated to be ten times greater than aid to developing countries. I was surprised that this was not mentioned at any point during my training in development studies and decided to write my master's thesis on the subject.

Do you want to share a memory from your time at FUF?
A very funny memory for me is from the first time I was part of FUF's Almedals editorial board. We were close to 20 volunteers who went to Almedalen to report on global issues for FUF's Aid Debate. We had been trained in interview techniques and the technical equipment to do our own interviews with interesting people who are so much more easily accessible during Almedal Week. Me and another FUF member saw Carl Bildt who had just planted a tree for the Vi forest. Pretty sure he would say no, I went over and asked if I could ask some questions. He said yes! I asked what development issue he thinks is the most important right now but didn't listen to the answer at all and just thought feverishly about what more questions to ask. This is FUF for me, a commitment that provides both theoretical and practical knowledge for non-profits active, but perhaps above all courage to dare to try and learn along the way!

What do you think is FUF's strength?
That it is a flat and open organization that is fantastic at encouraging young activists in their commitment to global development issues. As a committed person, you have great influence over which issues and in what way you want to be involved and spread knowledge. And that FUF gathers committed people across generational boundaries. Best combo for learning and networking.

What do you think FUF should focus on going forward?
Continue to provide global perspectives on issues that affect us all but hit the already vulnerable hardest. Climate crisis, energy crisis, increased food prices and inflation have even greater consequences in countries that lack the resources to deal with them. Now that aid is at risk of decreasing, FUF's role as a platform for a nuanced and factual debate about aid and global development issues is even more important.