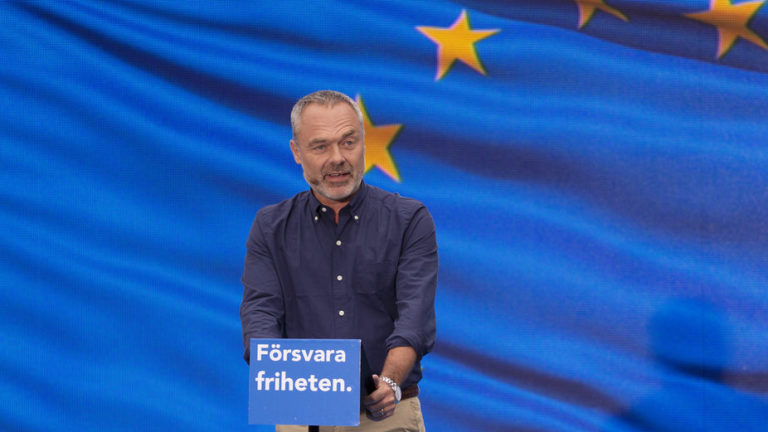 Of course, Jan Björklund could not help but mention Sweden's success in the World Cup. The hilarious joy after the win against Switzerland played into the hands of the party leader, and allowed a humorous introduction with references to both "Janne's gang" and a long-awaited win against opponents in red and green jerseys. Against a background of happy Sweden fans, the Liberal party leaders also took the opportunity to point out the difference between loving their country and applying nationalism as a political ideology. To instead defend democratic forces with liberal values, became Björklund's main message.

The fund with the cornflower characteristic of the party was overshadowed early in the century by a waving EU flag. Björklund remembered back to his youth's honeymoon, in another Europe and another Sweden. He described an Eastern Europe that, behind the Iron Curtain, longed for the liberal West, and how democratization and globalization after the fall of the wall took off and led us to the world we have today. A world that, according to Björklund, has never been better. He highlighted gratifying statistics on everything from reduced child mortality and that fewer people live in extreme poverty, as well as increased access to vaccines, clean water and schooling.

Although we welcome the fact that Jan Björklund reminds us of the positive progress that is taking place in the world, his view of history remains both simplified and unproblematic. Furthermore, he only touches on the global challenges we face today, other than in terms of ideology. Although the Liberals' environmental policy was ranked highest by the alliance parties in a report from the Swedish Society for Nature Conservation, the climate issue was mentioned, for example, in appendices linked to the importance of EU cooperation and in a boot to the current government's policy. The refugee issue and the financial crisis also became rhetorical points in a reasoning about the importance of continued and deepened EU cooperation.

EU cooperation in particular was given a large place. "The EU must be developed, not dismantled," he said to great applause, launching the EU as the third pillar of the Liberals' electoral strategy alongside school and integration. Björklund emphasized that in a world where populism and protectionism are growing strong, the EU can act as a liberal counterforce to peace and freedom through political and economic cooperation. However, he did not describe in detail how the populist and protectionist movements that are advancing in Europe should be dealt with in concrete terms, other than being blown away by liberal winds.

That neither Global Development Policy nor the Global Goals (Agenda 2030) were mentioned is not surprising, as we can assume that only a relatively small group of the electorate is sufficiently familiar with these concepts for them to be relevant to mention. However, even the holistic principles behind these tools shone with their absence. In the speech, we could not ascertain any kind of systemic thinking about how political actions can create rings on the water in more sectors than that referred to in the decisions, apart from the conviction that liberal ideals can solve most problems.

In all, Jan Björklund swept with the big, ideological brush, but missed the target when it came to concrete proposals. However, he delivered a passionate, offensive and sincere speech, which conveyed a genuine belief in liberalism and its capacity for positive change, in a world where democratic space is shrinking.