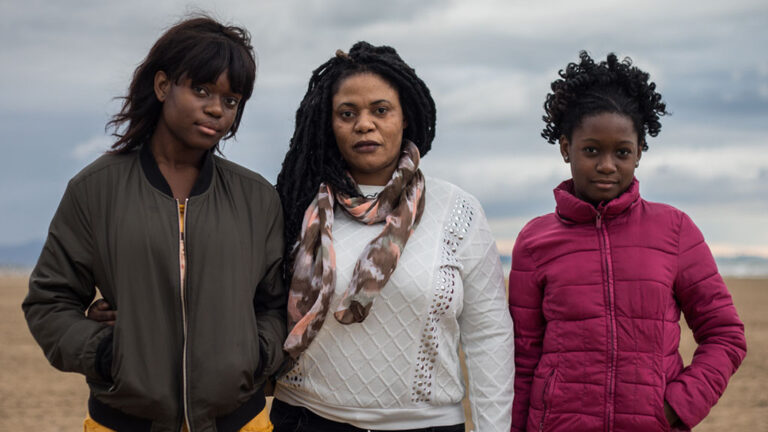 Vivian Ntih came from Nigeria to Spain 20 years ago. In the UNDP report, she says that she went through hell in Europe. Her daughters, Mari Mensah Damson and Elizabeth, were born in Spain. Photo: UNDP

Every year, hundreds of thousands of migrants come to Europe without a permit. They all carry important stories of driving forces, fears and development. Our new report shows, among other things, that "nothing" could have stopped most of them from traveling, writes Achim Steiner on the UN's development program UNDP.

Recently, a human tragedy once again made headlines around the world. 39 people were found dead inside a shipping container at an industrial area in Essex in England. 31 men and 8 women, whose identities currently remain anonymous. At the same time, the English authorities are beginning to investigate one of Europe's worst cases of human trafficking.

Although I hope I'm wrong, I'm afraid the different stories of these 39 people will never be told. Stories of why they left their families and friends and embarked on a secret and dangerous journey to Britain.

We may never see or remember their faces. And they are not alone. The same was true of the 71 migrants who were found dead in an abandoned truck in Austria in 2015. And the thousands of men, women and children who have died during dangerous boat trips in the Mediterranean - already 1 in number this year.

When the sensational headlines go down, interest usually disappears - and those who have died risk being reduced to statistics. Figures that drive the debate where unauthorized migration is stigmatized and seen as a burden.

Each person has a unique story

People are not statistics. Each person on the truck in England had a unique story that may now never be told. This makes it even more important that we now stop and listen to migrants. We must hear their stories of the driving forces, hopes and fears they experienced when they risked their lives to come to Europe without permission. We need to remind ourselves that the people behind the sensational headlines are real people.

This is one of the reasons why the United Nations Development Program (UNDP) has chosen to write the new report Scaling Fences. We want to give a voice to the African migrants who travel to Europe without a permit. There are many assumptions and claims made about this group of migrants, but there is actually very little first-hand information about them.

Reports Scaling Fences wants - through personal interviews with 1 migrants from 970 African countries living in 39 European countries - to increase understanding of the ancient relationship between human mobility and human development. All participants in the report stated that they arrived in Europe without a permit - and not for asylum or protection-related reasons.

The report makes a number of conclusions that may seem surprising at first glance.

Jobs are not always the most important thing

First, it is stated that work was not the only motivating factor behind the decision to travel. The migrants surveyed were not seen as "poor" when living in Africa, nor did they have less education than usual. 58 percent were either employees or students at the time of departure and the majority of those who worked earned competitive wages. The average age of the migrants surveyed when they arrived in Europe was 24 years.

This means that they largely belong to the generation of Africans who have taken part in two decades of significant progress in development. Despite this, 50 percent of those who worked felt that they did not earn enough.

Secondly, the report states that limited opportunities and a lack of freedom of choice were important factors behind young people's decisions to travel to Europe. Despite the positive development in their countries of origin, 77 percent felt that their countries' political systems did not give them sufficient opportunities to influence political decisions.

"Nothing" could stop them

Third, the report shows that only 2% of the migrants interviewed would not have traveled if they had had a greater awareness of the risks in advance. Despite the dangers and risks associated with the journey from Africa to Europe.

In fact, 41% of respondents said that "nothing" could have led them to change their decision to migrate to Europe.

The conclusions from Scaling Fences strengthens certain truths that we need to gain an increased understanding of. That migration is in fact about development. That migration in an unequal world is both a driving factor behind development and a result of progress in development. Although progress is erratic and not fast enough to meet the ambitions of young people.

The conclusions confirm that people who strive for greater freedoms and opportunities choose to migrate, even without a permit on dangerous roads, if they feel that this is their only choice. They want to create space for themselves and their families in the kind of world that the 17 global goals for sustainable development will help us all achieve.

The fact that migrants travel without a permit - and not through traditional migration channels - does not diminish the importance of their stories. Rather, it highlights the need for more secure and legal routes for migration, in line with the global framework Global Compact for Safe Orderly and Regular Migration from 2018. In addition, we must continue to invest in a future-oriented Africa with more socio-economic and political opportunities.

Migration - in all its forms - is sometimes portrayed as a crisis situation where everyone involved is a loser. But migration is in fact a long-term development trend. This trend began long before there were laws to regulate it, or even sovereign boundaries that could be crossed. This trend will continue in the future as well - and only increase as our world becomes increasingly globalized and hyper-connected.

We must increase our understanding of what drives people to climb both figurative and physical obstacles in the pursuit of a better life. By understanding, one can use the potential of human mobility to accelerate progress in development - both in the countries that migrants move to and from.

If we can work together for just this, it may be a small step towards preventing tragedies of the kind we have recently witnessed in England.

The text has previously been published in English on Inter Press Service.