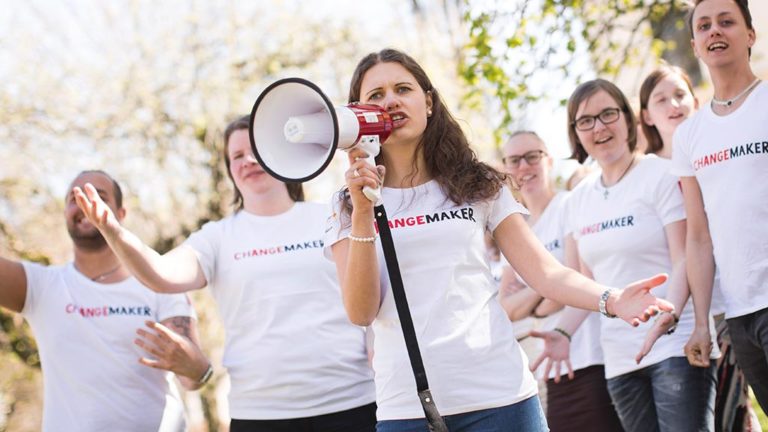 The new social climate in Sweden threatens not only vulnerable groups but also activists. We now notice a threat against people who are committed to global justice. This is a serious democracy problem. It is time for the government to take its responsibility, write young activists within the Church of Sweden's international work and the Church of Sweden's Youth.

When former democratic spaces such as Almedalen and Bokmässan are characterized by a threatening atmosphere where many organizations and individuals choose not to attend, where others are forced from there, where activists are documented, where some are abused; how can we not stand up and make our voices heard? How can we not react?

Much has happened since the strong popular movement in the early 1900th century fought for universal suffrage. We have also had time for 204 years of peace in Sweden. Have we become too comfortable? Have we forgotten to stand up for democracy? Do we even know what democracy actually stands for?

In addition, when the principles of freedom of expression are exploited by anti-democratic forces, we have a problem.

Fundamental human rights such as freedom of assembly, freedom of expression, freedom of religion and belief are threatened. Organizations based on a religious basis are suspected and endured threats and harassment.

The action volunteers are one of many organized groups in our society that try to push for and create a positive change for everyone's human rights. However, we see an increased threat in Swedish arenas against us and other activists. During Almedalen Week, some of us did not dare to go home ourselves as we were afraid of right-wing extremists who acted threateningly throughout the week. It is now risky to stand up for human rights. We see that more and more people are silent and do not speak out, neither digitally nor physically. This is a serious problem!

Democracy is about everyone being allowed to speak, but it must not be at the expense of someone else's safety or security. It is not a right to intimidate, threaten or otherwise rape one's fellow human beings. It's a crime. The form of government states that the public sector must counteract discrimination, not make it possible. The general public must also work to ensure that all people can achieve participation and equality, not limit them!

When we as activists no longer feel it is possible to defend the equal value of all people and stand on the side of the oppressed without being jumped on - then we are not whole as individuals. Together, however, we can stand up and it is together that we find strength and community. But it is time for the government and the Riksdag to also take their responsibility. The government and the Riksdag must live up to the form of government. Our politicians must stand up for democracy!

It is important that civil society is seen as a necessary resource and that we must be involved in safeguarding democracy. A strong civil society and association life is something that is needed to protect democracy. Together we create change!