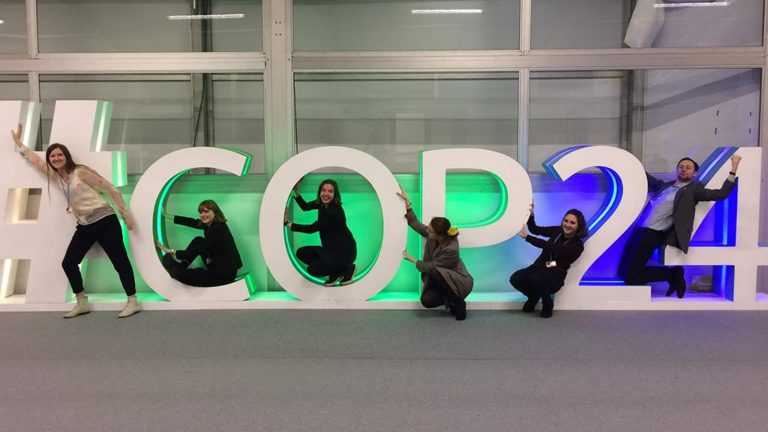 The youth organization Push Sweden was present at COP24 last week. But they did not feel very welcome.

Civil society's participation in the climate summit in Poland, COP24, has been met with reluctance and disinterest. It has been difficult to get housing, access to the negotiations and even to enter the country for some. The politicians' reluctance to listen is clear, even though it is our future they are endangering, writes the youth organization PUSH Sweden.

In what is known as Europe's coal capital, Katowice in Poland, the international climate summit - COP24 is taking place. It is a strange experience that the future climate of the world will be determined in a city built of coal, one of the dirtiest sources of emissions.

The negotiations are at a critical stage, during COP24 the rulebook will be hammered out - a collection of documents describing how the Paris Agreement will be implemented. The Paris Agreement is a historic agreement that was decided on in 2015. The goal is for global warming to be well below 2 degrees and preferably not exceed 1,5 degrees. It is only when the rulebook is ready that countries can start working on commitments they set out in the Paris Agreement.

The United States and Saudi Arabia are blocking negotiations

However, we see different levels of ambition in different countries, perhaps the worst being the United States and Saudi Arabia, which repeatedly block the negotiations. Most recently by not wanting to “welcome” the UN's climate panel IPCC's special report, but instead requesting to “note” it. A political move to reduce the position and influence of science. Even in the EU, we see that the ambition is not high enough and Sweden has a great responsibility to drive development there. The host country Poland, on the other hand, is a little more discreetly reluctant by setting the tone for discussions and choosing to focus more on certain issues than others. Poland has chosen to concentrate on what they call "Just Transition". It's about how to change your finances, energy mix and so on without creating unemployment or financial problems.

Poland is a country dependent on coal. It employs many hundreds of thousands of workers and about 80 percent of the country's energy comes from coal-fired power plants. During COP24, a whole day was devoted to the issue of Just Transition, and in several speeches by the Polish president, he mentioned coal in an almost positive sense.

In practice, this means that Poland's climate goal is not necessarily to achieve zero greenhouse gas emissions. Instead, they work for a slow phasing out and instead seem to aim to reach net-zero emissions by planting forests that absorb carbon dioxide as the trees grow. This is a method that the Swedish researcher Rockström has pointed out is an ineffective climate compensation.

That's not the only problem. If Poland continues to burn coal, the problems with air pollution will remain in the country. And miners will continue to have poor working conditions.

Poland is trying to give Just Transition the content that suits them with a strong focus on coal workers' lost jobs. However, it is important to see that more interpretations can and should be included within the concept. Just Transition must also accommodate the farmer and fisherman in the Global South who gets rid of his jobs due to climate change. The concept must also include justice across generational boundaries. For this reason, it is incredibly important that many different interests and perspectives are included in the negotiations.

Something else that is lying around is precisely about the inclusion of civil society at the conference. Poland, whose biggest issue in the negotiations is to make a change that is positive for its inhabitants, should perhaps make sure to include the inhabitants? At COP24, the number of seats at the conference was clearly limited and we civil society organizations found it more difficult than before to enter the negotiating rooms.

Accommodation was not easy to find. With the organization of the conference, they chose to outsource the accommodation to a company that bought up all the beds in hotels and hostels within a radius that extends all the way to Krakow. They then sell these sites for completely absurd prices. For example, we have encountered hotel prices of SEK 17000 for two weeks - and this is far from the highest price, but not so far from the lowest. This hits hard on activists who travel there for their own money.

The feeling of being rejected is imminent - despite the UN (UNFCCC) opinion that the participation of civil society is crucial for successful climate negotiations. Civil society is particularly important for the transparency of negotiations and agreements. They should not be something that is done in secret - but civil society should be able to participate, view and review the content.

At the same time, cries are heard from outside. Announcements about conference participants who do not enter the country, despite passports and accreditation to the conference, are beginning to spread in the joint groups.

Police violence and threats against activists

During the climate march on Saturday, the police had received reinforcements from Gdansk, among others, and police violence was soon a factor. We who marched felt threatened rather than safe by the police presence. As if this were not enough, Poland announced before the conference what is known as "the Polish Bill", which actually says that Poland has the right to monitor and save information about participants in COP24. Even the space for demonstrations was clearly limited and strict. Since measures such as these do not affect country delegations, it is extra important that Swedish delegations are responsive and invite civil society to meetings. There we can raise concerns and problems that the delegation can then take forward.

Environmental activists are already threatened today. This year alone, 120 have been murdered, which was highlighted at COP24. In Katowice, 2 people were taken from their hotel rooms without anyone knowing where they were going. After investigations, we were told that they had been deported. This creates additional insecurity for ditresta. In fact, some are at risk of being killed in their home countries for participating in COP24. But they feel it's worth it - for the sake of the climate and their countrymen.

As a young civil society organization, we find it tragic that our desire to fight peacefully for higher ambitions in the climate negotiations is met with repression. After all, it is we who will live in - and to a large extent implement it - this change. Without the pressure of civil society, the goal of the Paris Agreement would have been 2 degrees and the world even worse off. The IPCC's special report says that it is still possible to limit warming to 1,5 degrees and we are here to ensure that policy is in line with this. Ambitious countries like Sweden must take their place and put pressure on others. And above all, set goals that are high enough.

Countries such as Poland, the United States and Saudi Arabia have no right to endanger our lives and futures. The climate is the great question of our time and it is we young people who will have to live with the consequences of the decisions made today. We must be involved when our future is negotiated.