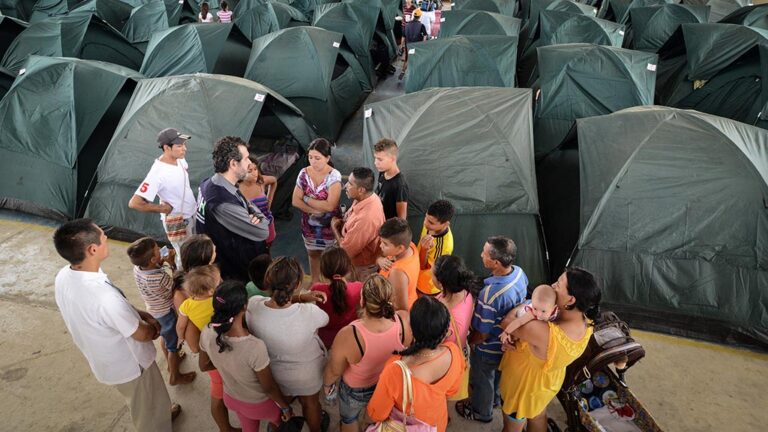 The migrants who come from Venezuela to Colombia receive little attention and few rights. Here, the Inter-American Commission on Human Rights, CIDH, visits a migrant camp at the border. Photo: Daniel Cima (CC BY 2.0)

In recent years, Colombia has received almost two million migrants from Venezuela. Far more than what the whole of Europe received during the so-called refugee crisis in 2015. Still, few pay attention to the thousands of migrants who leave Venezuela every day for extreme vulnerability in Colombia, writes Helene Cassemar Jeansson on Save the Children.

At the refugee and migrant reception center in the small Colombian town of Maicao, right on the border with Venezuela, the most vulnerable migrants receive a meal, bed and even psychosocial support to manage the experiences during the flight from their homeland. Every day, thousands of people cross the border into Colombia in search of food, jobs and a better life. Many are returning Colombians who once fled the violence and persecution of the Civil War.

A woman is sitting on a rickety chair and looks dejected. I sit down next to her and ask how she is. She says that she has a tumor as big as an apple in one breast and that she went to Colombia in the hope that someone would help her have surgery to remove it. In the home country, the clinics no longer function and the once well-equipped health system today lacks staff, equipment and medicines.

Colombia, which has suffered from civil war for half a century, is finding it difficult to provide adequate social services to its people already as it is. As a burden, the country has now received around two million people from Venezuela in great need of protection, health care and education (the official figure is 1 million, but UN organizations estimate the number to double). The Colombian health system is already completely congested and can at most receive emergencies. The queues for hospitals and clinics are already long. Many are pregnant women who have crossed the border to give birth.

Venezuela, once a rich country that could use oil resources to lift parts of its population out of poverty and also support other Latin American countries, has suffered from hyperinflation and disintegration. Even people with jobs can no longer support themselves. The salary is not enough to buy food and medicine and the shelves in the shops are still empty many times over.

The first generation of migrants were the professionally established ones. They left as early as 2016, were able to fly to the United States or Peru and quickly integrate socially and economically. It is more difficult for the 770 who, according to official figures, crossed the border in 000. The few assets they received with them, they have often lost on the road, exploited by smugglers, stolen or cheated. Those who can not afford to take the bus continue on foot along the roads with destination Bogota, Peru or Ecuador.

Others remain in the border districts, not infrequently in informal settlements in temporary protection of cardboard and old tarpaulins, but without electricity, water and sewage. Most vulnerable are those who sleep on the street or in some park where they gathered to escape robbery and harassment. To get food, children and adults are forced to beg, search among garbage or sell small items, such as lollipops and chewing gum. Some see no other way than to sell sex in order to survive.

There is no reliable information on how many children have been affected by the migrant crisis. On the other hand, we know from other crisis situations that children are usually about half of the migrants - and they are among the most vulnerable. Young guys are sent away with expectations of finding jobs and sending money home. Children of all ages are trafficked and exploited for selling sex or being subjected to sexual and gender-based violence.

Insufficient support from the outside world

In collaboration with other organizations, Save the Children supports the migrants who have moved to Colombia in various ways. Children and their families are given the right to security and protection through child-safe places where children are allowed to be children, play and perhaps receive psychosocial support to deal with the difficulties they have experienced.

The most vulnerable families have access to bank cards with cash so that they can buy food, medicines, arrange housing or anything else they prioritize. About 300 children do not go to school. Through temporary training centers, they can catch up with the teaching and be part of a social context. We will soon open a health clinic and can support women's right to sexual and reproductive health as well as work preventively against gender-based and sexual violence.

Despite all my efforts, I feel terribly inadequate sitting without an answer with my newfound friend at the refugee center. Thinking about what it would have looked like at home in Sweden if a small lump in the chest had been discovered at the routine checks I have been called to so often. What an impact it would have been with various examinations and treatments.

The lack of awareness about the crisis in the media and among donors makes it difficult for Save the Children, the rest of civil society and UN organizations to work in Colombia. Maybe it's already too late for my friend to get his cancer cured, but much, much more can be done by the international community. It must strengthen the right to survival and social justice for the many thousands of people who are forced to leave Venezuela every day in the hope of a dignified life!

Helene Cassemar Jeansson works at Save the Children. During November-December 2018, she was assistant team leader for the humanitarian operation for Venezuelan migrants in Colombia.