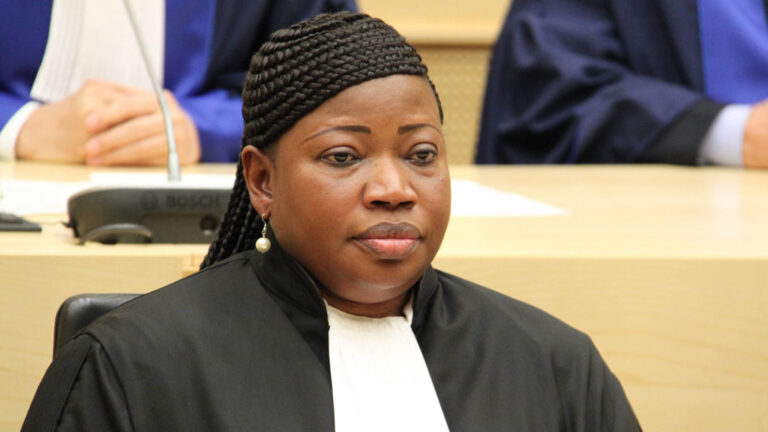 ICC Chief Prosecutor Fatou Bensouda did not receive a visa to the United States after the court wanted to investigate whether the US military committed war crimes in Afghanistan. Photo: ICC-CPI ©

Next week, the states will meet in the International Criminal Court ICC for a meeting in The Hague. The court is currently in a turbulent time and many popular movements will be in place to show their support for the court. But even an important court can be better, writes Jens Petersson who participates in the meeting on behalf of the Swedish UN.

Now, in early December, I, along with many other representatives of popular movements, will be in The Hague to attend the International Criminal Court's State Party Meeting. We will also participate in - or arrange - side events and show our support for this International Criminal Court (ICC). The court is crucial for the world to be able to live up to its duty to protect civilians by demanding responsibility for those who commit war crimes.

In the autumn, the ICC handed out its harshest punishment to date to the Congolese warlords Bosco Ntaganda was sentenced to 30 years in prison. He is convicted of, among other things, sexual slavery and rape. The verdict is historic because it is the first time that the ICC has convicted a person who has been accused of various sexual crimes.

Earlier in the autumn, a preliminary investigation chamber announced that a Malian jihadist would also be prosecuted. Al Hassan Ag Abdoul Aziz, who during the Islamist takeover of northern Mali in 2012 were likely to commit rape, torture, sexual slavery and the destruction of Muslim cultural treasures and historic buildings.

The ICC is also up to date because the court this week gave the prosecutor the right to open a full-scale investigation into the issue of the crimes committed against the Muslim Rohingya minority in Myanmar.

All these cases show the great need for a permanent international court.

At the same time, it is a court that has recently been faced with questions. Some African voices have complained that the court only seems to judge Africans and have hinted that there is racism behind this. Of course, there is nothing in this. The strong support and relatively large accession of African states to the ICC as well as these states' own desire to have cases from their countries tried is the real reason. It may be appropriate to point out that the ICC's Chief Prosecutor, Fatou Bensouda, is an African woman.

However, the court's independence and neutrality have rightly taken a hit in 2019. For a couple of years now, Bensouda has wanted to expand an investigation into war crimes committed in Afghanistan to include crimes that could possibly have been committed by international forces, such as the US military and CIA intelligence personnel. This has, unsurprisingly, aroused opposition from the United States, and under President Trump's rule, the opposition has grown into a hurricane force. In April this year, the United States announced that Bensouda's visa to the United States had been revoked. The United States is thus preventing the Chief Prosecutor of an international court from, for example, being able to come to the UN headquarters in New York.

In the tense situation that arose, the court chose the mildly overly pragmatic solution to state that the prospects of conducting a successful investigation against the will of the United States were so small that no investigation would be made at all. This provoked a legitimate outcry from several human rights organizations. During the autumn, the court also gave the chief prosecutor the opportunity to appeal against the court's decision so the last word on that question has not yet been said.

Starvation can be counted as a weapon

Concrete cases such as these will naturally not come up in the negotiations when the 122 countries that are members of the ICC system gather in The Hague next week. On the other hand, discussions are expected, among other things, on various proposals to reform and strengthen the court and its work. Of course, an important court can also be improved.

Another concrete issue that comes up at the meeting is one Swiss proposal to include the use of hunger as a weapon among the war crimes that the court should be able to prosecute, and then also in civil wars. The proposal interacts well with the resolution which Sweden, together with the Netherlands, Côte d'Ivoire and Kuwait, pushed forward in the UN Security Council during our time in the Council to shed light on the links between war and famine. The proposal is expected to receive great support from both the state parties and among us popular movements in it the International Coalition for the ICC.