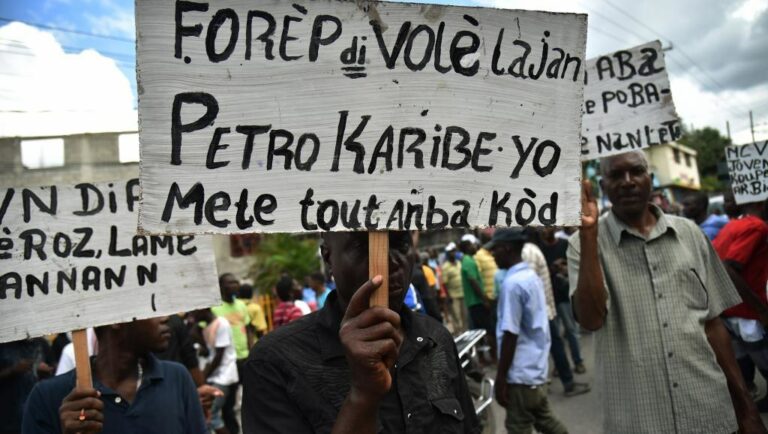 On 13 February, Foreign Minister Wallström presented the annual foreign declaration. Through it we get to know how the Swedish government views the world. Unfortunately, the foreign declaration tends to lift countries in the global south only to the extent that they have been hit by major natural disasters or major conflicts.

This year, Latin America - just like in the last two decades - was virtually absent from the declaration. This is what it has looked like regardless of which political bloc the Foreign Minister represents. At most, the region was described this year in terms of "fast-growing economy". In summary, it could be interpreted as meaning that other regions of the world are interesting from a Swedish perspective only insofar as it has entailed obstacles in the form of natural disasters or conflicts, or opportunities for Swedish economic interests as economies grow.

Against this background, it is interesting that both last year's and this year's foreign declarations choose to mention the country Venezuela - and this year's declaration assesses the situation there as 'desperate'. Without intending to question the crisis in Venezuela, I note with surprise that there is not a single word in the foreign declaration about the desperate humanitarian situation and political crisis that Haiti is currently suffering from. This is despite the fact that the hunger riots started already on 7 February and are said to have taken place at the same time as the Foreign Minister read out his declaration on 13 February.

The country has run at the bottom

The reasons behind the massive demonstrations and riots in Haiti - the small Caribbean country as 1 is an economic crisis and food crisis deepened by a devaluation of the country's currency, inflation and electricity and petrol crisis. And behind the crises are corruption and fraud scandals linked to the oil that Venezuela has been selling at reasonable prices to the country since 2008. Haitian President Jovenel Moise, who was elected in an election in which only 21 percent of the population participated, is now considered to have run the country.

But Haiti's crisis did not begin now, but has been going on for a long time. The last time Haiti was mentioned in the foreign declaration was in 2011 when the country had been hit by an earthquake that killed about 100 lives. In 000, the country was hit again, this time by Hurricane Matthew, which in addition to casualties, left thousands homeless. Of these, 2016 still live in camps.

Today's crisis therefore bears traces of previous natural disasters, but is also linked to climate change and drought. The country is now suffering for the third year in a row from drought and if it does not rain now, the fourth harvest will also be destroyed. About 90 percent of Haitians are self-sufficient farmers who depend on the rain for their food production. According to the UN Food Program, since 2015, these farmers have already lost about 70 percent of their crops. This in turn has led to famine. According to the Famine Early Warning Systems Network, a network that monitors food disasters and famine, Haiti is now at grade 3 on a five-point scale of acute food crisis.

So the situation is such today that 3,6 million Haitians, corresponding to a third of the country's population, live in food security and 1,5 million are already malnourished and starving. About 80 percent of Haitians live below the poverty line and 5 percent of children under the age of five are malnourished. Many school-age children have also left school as they cannot afford school supplies or food bags. According to the UN, this food crisis is the worst to hit Haiti since 2001 and has therefore called for international efforts to combat this crisis.

The crisis will deepen

Most indications are that the crisis in Haiti will deepen and that democracy will also be subjected to severe attacks. It is rumored that former soldiers from previous dictatorships, leaders of paramilitary groups, coup plotters and others are on their way back to Haiti via the Dominican Republic. Among them is a former police chief - notorious for leading human rights abuses - who is said to have more than 300 armed men ready to attack the presidential palace.

Despite this, it seems that the international community, including Foreign Minister Margot Wallström, is not as interested in resolving either the humanitarian or the political crisis in Haiti as they have been in Venezuela's affairs and sovereignty. The question is whether this has anything to do with the fact that the President of Haiti was quick to - like Sweden - recognize the self-proclaimed Guaidó as President of Venezuela and thus show his support for the United States?

I would like to say that Sweden's and the western world's lack of interest in Haiti has both historical and contemporary reasons.

The historical causes are linked to the shameful colonial history. This small country, which today is considered one of the poorest in the world, dared in 1804 to challenge both the colonial and the racist global power order when they proclaimed themselves as the first black republic in the world. But the colonial power fought Haiti's rebellion through intense military attacks - and when attempts to overthrow the country again failed, Haiti was instead put under economic pressure. This was because the colonial powers forced Haiti to pay damages to the former slaveholders for the land and property they "owned", as well as for the enslaved people who had become free. So Haiti was attacked from birth and then the country would have a hard time getting back on its feet.

The present, or neo-colonial causes, have to do with Haiti's little geopolitical strategic importance. Unlike Venezuela, Haiti has no oil, nor do the other natural resources desirable to the West in the form of, for example, primeval forests. Haiti's chronic poverty means that the country is not seen as interesting either as a market for the rich countries' products.

Hence Sweden's lack of interest in Haiti, its democracy, those who die during the riots and the humanitarian crisis that the country has suffered.