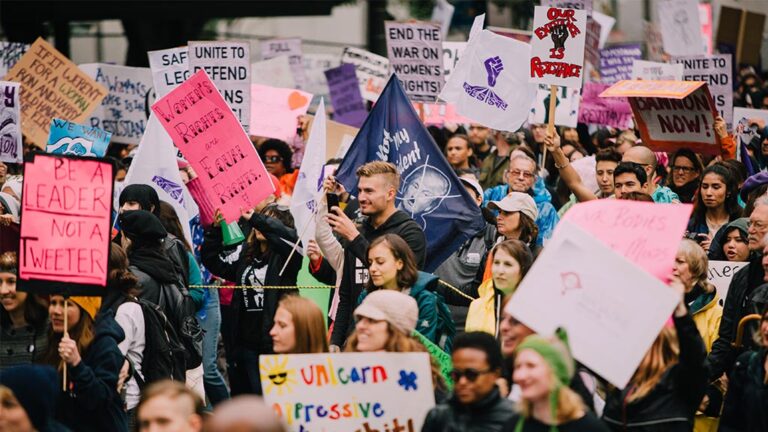 No one can have missed the International Women's Day on March 8, which is as relevant today as when it was introduced in 1977. This, together with the pursuit of a more democratic world, where people work with human rights, emerged in this week's debate.

"The feminist struggle is needed today more than ever. In Europe and the world, there is currently a backlash against women's rights, "write representatives of the Left Party in their article in Dagens ETC. It means that the nationalist, racist, as well as the conservative right in Europe and around the world, are getting more and more attention to their voices. This is the basis for the backlash that undermines women's rights. Furthermore, they believe that men's violence against women is a global societal problem and every day 137 women die from a family member or partner. Furthermore, on International Women's Day, Malin Roux Johansson and Parul Sharma urge Sida to stop aid that does not support the abolition of prostitution. They believe that the unique sex purchase law that exists in Sweden, where you protect those who sell sex and target those who instead use, is a law that should be exported to other countries. Sida should therefore review the grants and reallocate funds.

In Expressen's debate, debaters from Amnesty, Diakonia and Fair Action write about their review of Swedish companies' human rights work. The review shows that Swedish companies are deficient in how they report their work with human rights and many do not even meet the requirements required by the new legislation on sustainability reporting. Many of the companies that are lacking in its accounts are in high-risk countries in industries such as retail, extraction and food. The review shows that there is a continuous process of how to work with human rights and is in conflict with UN principles.

Gunnar Jonsson writes in Dagens Nyheter about the mass demonstrations that shake the political leadership in Algeria and how the population has grown tired of the authoritarian regime. Jonsson believes that the protests in Algeria show that the people are not content with dictatorship in the Middle East.

Lars Adaktusson and Mikael Torstensson write in Dagens Nyheter that Sweden should recognize Somliland, which stands out as the only established democratic country in the Horn of Africa. The country is surrounded by pirates, dictatorships and terrorists, but has nevertheless been able to develop into a democratic country and has, among other things, adopted the UN Declarations of Human Rights. This good development, the writers say, that the world democracies have turned a blind eye to.

"Stop aid that does not work for the abolition of prostitution"
Malin Roux Johansson and Parul Sharma, Dagens ETC

"Algeria shows that the Middle East is not content with dictatorship"
Gunnar Jonsson, DN