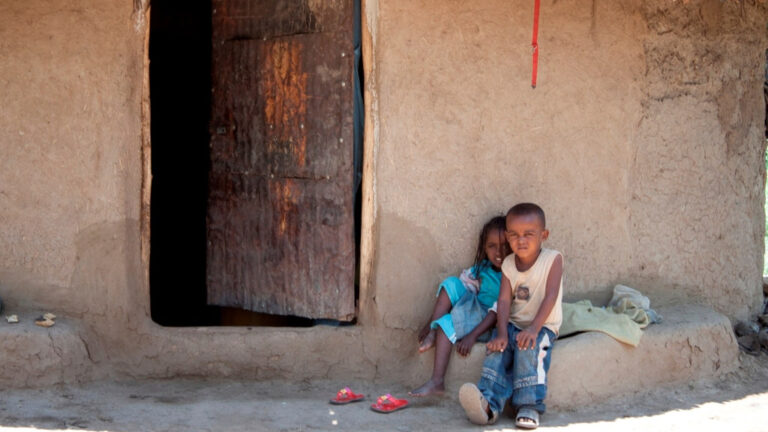 - Too few talk about these two themes together. For those of us who meet and work daily with children and families who live in extreme vulnerability and in areas that are hard hit by climate change, the connection between the effects of climate change and violence against children is a common observation, writes Martina Hibell, Secretary General of the Children's Fund in the report.

More children are exposed to violence

World Health Organization (WHO) has appreciated that as many as 1 billion children between the ages of 2 and 17 are exposed to physical, psychological or sexual violence annually. Violence affects families, communities and entire nations, but above all the health and well-being of children for the rest of their lives. The Children's Fund believes that violence will increase and worsen as climate change becomes more serious.

By highlighting a number of different examples, one worse than the other, Barnfonden strengthens its own hypothesis in its in-depth literature review. There is a direct link between rising temperatures and increased propensity for violence and conflict. In the countries that will be hardest hit by climate change through reduced land area, water shortages and poorer harvests, the risk of violence increases further. Malnutrition can contribute to antisocial behavior, aggression and violence. As a result, Barnfonden believes that the risk of children being abused at home increases.

There are also direct links between sexual abuse and people walking longer distances to fetch water. The report shows that women and children who have had to go further than before due to drought have become increasingly exposed to assault, sexual harassment and rape. Sex is in some cases a requirement for access to water. One of the studies showed that the risk of children being exposed to sexual violence increases by 30 percent in connection with drought.

WHO believes that violence against children can be prevented. To prevent violence against children, risks in the vicinity of children need to be addressed systematically, from the individual level to the societal level. They have developed several strategies to achieve this. The Children's Fund's report cites WHO's strategies as an example where the necessary climate perspective is lacking.

- When we talk about building resilience to climate change, we must also demand that the special vulnerability of children and young people be taken into account both directly and indirectly. This is something that needs to come at the policy and strategy level to get enough impact and thus something we want to see from the government, the Ministry of Foreign Affairs and Sida. We also want to see that the forums that focus on violence against children also weigh in on the effects of environmental degradation and climate change. We want the WHO's reports on the effects of climate change on children's health to also address violence against children as a serious consequence, writes Martina Hibell, Secretary General of the Children's Fund to FUF.

UNICEF, UNICEF, It is estimated that approximately 175 million children will be affected by climate-related disasters each year in the coming decade. Children, who are most vulnerable to the effects of climate change, should therefore be a priority group in climate action according to UNICEF, which they are not always today. It is important that there is always a clear child rights perspective, where children's participation is a central factor when environmental and climate issues are handled, according to the Children's Fund.

The next step in the question

More research is needed to strengthen the Children's Foundation's hypothesis that violence against children is increasing due to climate change, something the Children's Foundation emphasizes in its reports and statements. The challenge is to measure the causal effect in such a complex and multifaceted issue, according to Martina Hibell, Secretary General of the Children's Fund. She tells FUF that they are currently in discussions with the Child Rights Institute at Lund University about more research on the issue.

- The Children's Fund has only begun to raise this issue. We will continue to work to increase understanding, both among the general public and decision-makers, of this connection and the importance of linking the climate issue with children's rights and child safety, writes Martina Hibell, Secretary General of the Children's Fund to FUF.