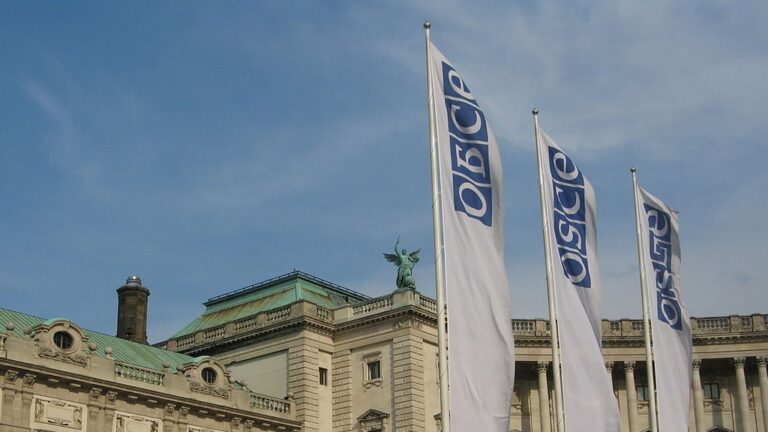 Sweden will focus a lot on gender equality issues during the year as chair of the OSCE. Photo: Kaihsu Tai

In 2021, Sweden will chair the Organization for Security and Co-operation in Europe (OSCE). Utvecklingsmagasinet has interviewed Tove Wennergren, communications manager for Sweden's OSCE Secretariat for the Presidency 2021, about which perspectives Sweden can contribute.

In January 2021 Sweden takes over the presidency in the Organization for Security and Co-operation in Europe (OSCE) for 12 months. Sweden's Foreign Minister will then be chairman of the organization. The OSCE brings together 57 different states in Europe, Central Asia and North America with the task of strengthening trust and cooperation between the participating states, as well as preventing and resolving conflicts. The term "from Vancouver to Vladivostok" is usually used to describe the large geographical area that the countries cover.

— It is important that so many countries, with such a large geographical spread, have been able to agree on a number of far-reaching principles and commitments, says Tove Wennergren, communications manager for Sweden's OSCE Secretariat for the Presidency 2021.

But there is also some polarization in the organization. This is a challenge because decisions within the OSCE must be approved by all - which means that individual countries can block important decisions.

— It will be a challenge for Sweden to find constructive ways forward so that all states stand behind decisions and respect the basic principles that the organization has agreed on, says Wennergren.

Wennergren explains that there is a great strength in the states succeeding in making decisions by unanimity. What gives the OSCE important tools for delivering results to the people of the region is that the states have agreed on a number of principles and commitments that can be referred to when a crisis arises. Human rights and democracy, for example, are two very strong components that should permeate the organization's work. Defending and maintaining this is a major priority for Sweden as OSCE President.

A strong voice for women's participation

Sweden will also defend the rights of women and girls and highlight women as actors for peace-building. The OSCE works with security through three dimensions - the political-military dimension, the economic and environmental dimension and the human dimension, which include human rights. In all these areas, Sweden will ensure that the gender perspective is included.

— The gender perspective will permeate everything we do during our presidency. We will work to ensure that there is a gender equality perspective in all areas of activity, for example during meetings, in recruitment and in field assignments. The Foreign Minister will also appoint a special representative for gender issues, says Wennergren.

Right now, there are major security policy challenges in Europe. There are both political crises and conflicts that pose risks to the region's security. Wennergren points out some of the conflicts that the OSCE will focus on in 2021. Among other things, the political crisis in Belarus that began in August, but also an unresolved conflict in the Nagorno-Karabakh region, which lies on the border between Armenia and Azerbaijan, which has flared up. up again in September. The conflict in Ukraine has also been high on the OSCE's agenda since 2014.

— A major focus for us will be to work to work for peaceful and sustainable solutions to the conflicts in the region, says Wennergren.

There are different types of formats and mechanisms within the OSCE that can be used when a political crisis arises. Wennergren gives an example of what tools the OSCE can take out of its toolbox to deal with a crisis, such as the one in Belarus.

— Sweden as incoming chairman has offered to facilitate a dialogue between the parties in Belarus. Now the OSCE has also activated something called the Moscow mechanism to be able to investigate and report on the situation in the country, Wennergren says.

The Moscow mechanism gives the states within the OSCE the opportunity to commission independent experts to report on the situation in crisis-stricken countries. The OSCE can then decide on measures based on the experts' report.

On 14 January 2021, Foreign Minister Ann Linde will present Sweden's official presidency program with the agenda for the whole year in Vienna, where the OSCE's headquarters are located.