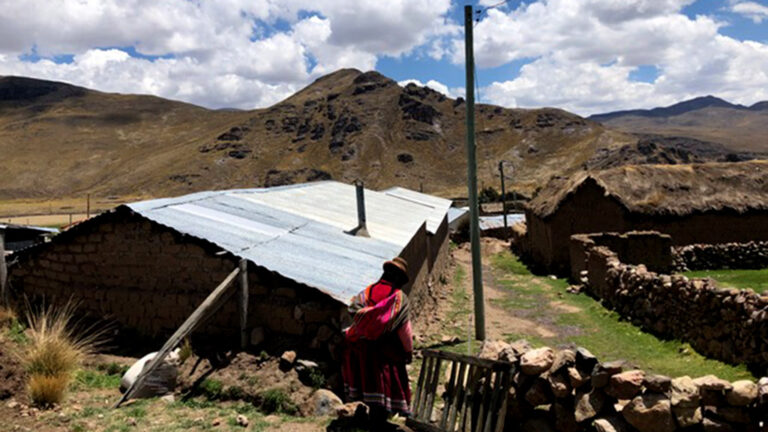 High up in the Andes in southern Peru you will find the small mountain village of Umachulco. It is a place characterized by agriculture, alpacas, colorful clothes and a changing society. In September last year, Femucarinap was introduced: "Federación Nacional de Mujeres Campesinas, Artesanas, Indígenas, Nativas y Asalariadas" in the village. The organization was started as early as 2006 and since then, Femucarinap has spread across several parts of the country.

As an intern for the Latin American groups, I had to spend a few days in Umachulco to learn more about the organization's activities and living conditions in the village. Magdalena is the leader of Femucarinap in the village whose local association she herself has started. She told me about how the organization has helped her gain a better self-esteem. Until she became involved in the national organization, she did not know her rights. She felt alone, which Femucarinap changed.

According to Magdalena, it is important to make women aware of their rights, which is an important tool for combating the macho culture that is strongly present in society. Everything she has learned from Femucarinap during the years she has been involved, she wanted other women in the village to take part in. Nowadays, there is a better community between women, which is an important driving force for bringing about change within oneself and in a society like Umachulco.

Despite Femucarinap's presence, life in Umachulco is still marked by patriarchal structures and challenges. Now Magdalena wants to start a cooperative alongside Femucarinap with the women who make handicrafts from Alpaca, among others. Magdalena believes that it would strengthen the economic role of women. However, money is needed to be able to start the cooperative, which is not within reach.

The mine was formerly a workplace for many of the inhabitants of the village. Due to a lack of working environment and difficult working conditions, many quit their jobs there. In addition, according to Magdalena, the inhabitants prefer to cultivate the land. Nowadays, many, both women and men, engage in agriculture and live on what they themselves produce. Some also sell a small share of production in nearby markets.

During a tour of the village, she showed how the land is farmed in a natural way. No chemicals or other environmentally hazardous production methods are applied. For the inhabitants, it is about securing food sovereignty and protecting '' Pachamama '' - killer land. Pachamama in the indigenous languages ​​quechua / kichua and aymara are everything and includes everything from humans and animals to plants and water. Nature is therefore not seen as separated from man as in Western interpretation, nor a resource to consume for our own gain.

Umachulco, as I see it, is an example of a village in development with an alternative model where women together fight to strengthen their rights in symbiosis with Pachamama. It's a place we can all learn from.