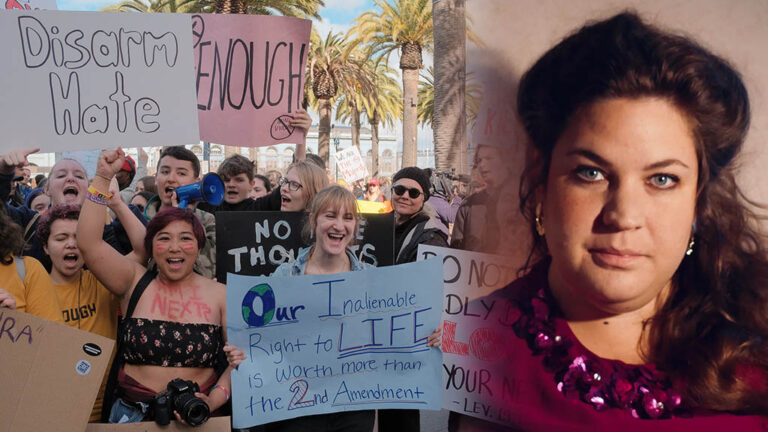 When young people organize for peace, they are often seen as troublemakers, writes LSU's Emelie Weski. In the United States, for example, young people protesting against gun violence have been described as "radicals with a history of threats."

Young peace activists around the world are being imprisoned and tortured because of their age. So-called "young troublemakers" have to blame themselves and are denied the right to a fair trial by the police and courts. This is shown by LSU's report Expanding space. But young people do not just fall victim to their commitment to peace. They are too targets for recruitment to terrorist activities and is severely underrepresented in all political decision-making.

In 2015, Resolution 2250 on youth, peace and security was adopted by the UN Security Council. It is the first resolution that raises a cross-cutting youth focus. The resolution stated that the majority of those involved in armed conflict are young - therefore young people must be part of the solution. Supplementary Resolution 2419 was produced in 2018 to further strengthen the focus on young people's representation in conflict resolution and in prevention work.

The resolutions recognize young people as key actors in peace processes. It is an important marker against the countries where the organization of young people is otherwise seen as a threat and a breeding ground for extremism that opposes the power of the state.

Young people are seen as troublemakers

That the resolutions are in place at all is a win. But there are many examples of young people's vulnerability and how youth organizations are used as tiles in security policy. In Gaza and Western Sahara, there are currently young peace and independence activists imprisoned and tortured without trial, in order to silence them. Young people's human rights are violated on the grounds that they are neither children nor adults - but just "young troublemakers".

The same view of young people is also found in the United States. In 2018, 2 million young people marched in protest against gun violence in the United States. The US arms industry (NRA) launched the days before a campaign that described the Protestants as "radicals with a history of threats, violent language and acts of violence". A campaign without evidence. In interviews, presidential candidates, such as Marco Rubio and Rick Santorum, say that young people should not ask decision-makers to solve their problems.

In Europe, the national council of the youth movement is being dismantled so slowly. In Belarus, The Belarusian National Youth Council (RADA) lost its state and compulsory registration in 2006. Instead, the government has created a new, state-approved country council. And the Secretary General of the Council of Europe, Thorbjørn Jagland, announced in May this year that youth activities will be removed from the organization's budget 2020/21. Part of an economic emergency plan after Russia and Turkey withdrew their co-financing. The payment was made after Russian representatives were denied the right to vote in the council as a result of Russia's annexation of Crimea in 2014.

Five years have passed since the UN Security Council adopted Resolution 2250. In May 2020, the UN Secretary-General is invited to report on the implementation of the two resolutions. An implementation that has so far been limited on the Swedish side.

Resolution 2250 must be implemented in all countries and not just those that are part of armed conflicts. Despite this, Sweden has placed the implementation and reporting of the resolutions on authorities that are primarily to contribute to peace abroad. It is believed that peacebuilding should be conducted elsewhere and that the resolutions are not relevant to the Swedish context. A result of a downgrading of young people, peace and the security agenda.

Internationally, Swedish disinterest has led to absurd contradictions. For example, Saudi Arabia is one of the largest funders of the UN Large Group for Children and Young People. With the sole aim of undermining progressive values ​​through a number of, not so youth - friendly, youth delegates to various high-level forums.

Countries such as China and Russia, on the other hand, use their youth representatives to pursue so-called "soft power". Among other things, they become Facebook friends with other young people and propagate the story of their leaders as omniscient and sufficiently democratic. The statement by Russian President Putin on Greta Thunberg as a "manipulated teenager" should be assessed in the context of 20 years of Russian advocacy and active opposition to the organization of young people in Russia and globally.

The world situation can be set in motion

How world leaders talk about the rights of young people in armed conflict - and about the youth movement - has real consequences for young peace activists. Through a few strategic investments in the youth platform, human rights can be undermined, peaceful democratic organization stopped in its infancy and the world situation shaken.

The organization of young people is currently seen as a low-hanging fruit for those who want to undermine democracy and influence the international security situation. If countries such as Sweden do not take responsibility for the youth perspective in security policy, there are clear indicators that other less democratically minded states are willing to use the platforms that we have chosen to downgrade.

Peace is a sliding scale between two extremes. From freedom from violence and freedom to organize democratically, to authoritarian regimes and wars. And young people's organization is particularly vulnerable even with small shifts on the scale.

A Swedish investment in resolution 2250 should be seen as an opportunity for Swedish security policy to use young people's organization in Sweden and the world as a health barometer. The organization of young people talks about how things really are with democracy and peace. It is time for Sweden to realize the value of the youth movement's participation in peacebuilding and security policy. So that young people can continue to organize for peace and international stability. In both good times and bad times.