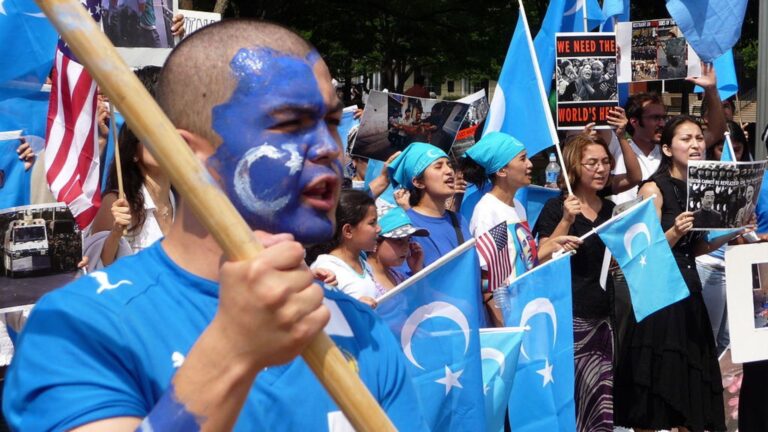 Uighurs are protesting outside the White House in Washington DC. Photo: Wikimedia

Torture, forced sterilization and indoctrination. The Chinese government continues its abuses against the Muslim minority Uighurs in the Xinjiang region. For over four years, it is estimated that one to two million people have been placed in "voluntary" retraining camps. According to China, it is for the people's own good while the outside world is talking about genocide.

Recently I watched SVT's documentary A Swedish tiger. A gloomy documentary about Sweden's silence and guilt during the Holocaust. About what we knew, could have done and what we never did.

More and more people believe that China's campaign against the Uighur ethnic group and other Muslim minority groups is about a systematic genocide. About 15 million people belong to these groups in China. According to China expert Johan Lagerkvist, there are as many as one to two million Uighurs led to so-called "vocational schools" for "voluntary retraining" in the Xinjiang region.

Satellite photos and leaked documents from Xinjiang, however, shows pictures of closely guarded prison systems. That it would be a voluntary camp at the same time as high walls and barbed wire surround the area does not go together. According to Lagerkvist, it is instead one echo of Mao Zedongs thought of a "people's war" that bounces against the walls of prison camps and drives President Xi Jinping's abuse of the Uighurs.

Xi Jinping claims that the regime is carrying out a defensive measure against radical Islamism. He believes that these camps are necessary to ensure the security of the country. The president then refers to incidents in which radical Uighurs carried out attacks in Xinjiang and fought for the Islamic State (IS) in Syria.

However, the credibility of this argument collapses if one studies the proportions of the regime's actions. The collective punishment of innocent people, including women and children, ordered by President Xi Jinping cannot be compared to the assassinations of individual extremists.

What can be compared, however, is the systematic data collection, persecution and deportation of Uighurs with the planned extermination of Jews and other minorities during World War II. The ideology behind it is also the same - to become a nation with only a certain type of citizen. These citizens must be cast from the same mold and everything that deviates is cleared away like weeds, or "exterminated like pests" as the message was during World War II.

Human rights are not respected

There is information that the Chinese state has already deprived hundreds of thousands of children of their families and women testifying to forced sterilization. In the camps, Uighurs are repeatedly forced to say that there is no god and thus renounce their faith. Instead, they must sing songs, read poems and literature that are considered to belong to the "real" Chinese culture and its citizens. Uighur cultural monuments are destroyed, influential musicians and cultural profiles suddenly disappear and old traditions are banned and then replaced with Chinese festivals.

In addition to psychological torture - hate propaganda, exploitation and discrimination - the camps are a place of physical violence that has already deprived many Uighurs of their lives. Many people suffer from hunger and people who do not obey orders (or are just randomly selected) subjected to various torture methods.

China as a great power

That China is a great power both economically and militarily and that the country's global influence is constantly growing has probably not escaped anyone. Despite this, Sweden and other democracies must dare to draw borders. After World War II, courts and conventions were established with the promise that what happened to the Jews will never happen again, a people will never be oppressed and destroyed because of their religion, culture and ethnicity. Many countries have chosen to stand behind this democratic value base, the next step is to use it in practice.

President Xi Jinping does not seem to feel threatened by Western democracies at the moment when he attends a summit in Beijing should have said "let them whine" when he commented on the criticism from the West. Such a relaxed statement indicates a huge failure on the part of the democratic nations.

In order for more Uighurs not to have to face the same terrible fate as the Jews and other minorities did 80 years ago, Sweden and the UN must dare to set foot against China. We knew what was done to the Jews then, and we know what is going on with the Uighurs now. Diplomacy knows better than to dress in blue-yellow striped fur, we will never be silent again.