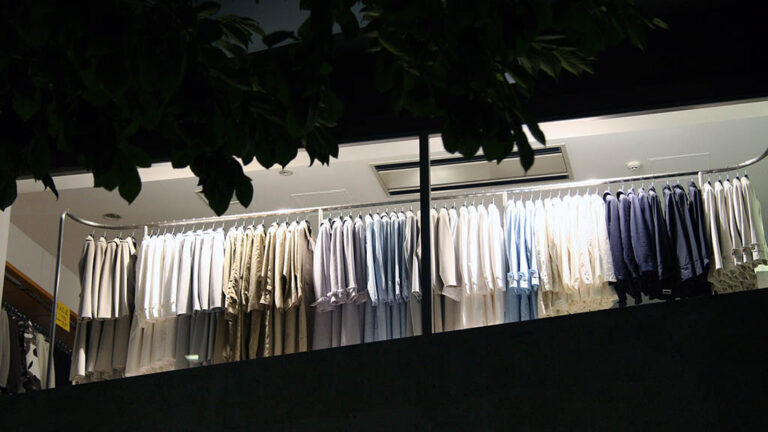 The fashion industry is increasingly promising sustainable solutions. Companies like H&M have been accepting textiles for recycling and recycling for a couple of years now. But an overconfidence in the circular economy can lead to continued unsustainable consumption and a high climate impact.

The containers can already be seen from the entrance, straight ahead in a hallway of hanging garments they shine with their green signs. "Recycle here!" is the call. The garments that are handed in will, according to information on the containers, be reused, reused and recycled. As a thank you for leaving your unwanted garments, you will receive a voucher to buy new clothes for. An employee at the H&M store on Hamngatan in Stockholm says that what is collected becomes new clothes in the store, marked with green labels with the text "conscious", which means conscious in Swedish.

Since a couple of years ago, more and more fashion chains in and outside Sweden have started collecting and receiving customers' old textiles as part of their sustainability work. At the launch of its new sustainability initiative, H&M released a commercial where the camera sweeps over stained and worn garments to the rhythm of an electronic pulse. Now we'll get to grips with the mutual bad conscience, promises the English-speaking female commercial voice while the film stops at a young woman in a forest. The camera sweeps on a sequin dress that can now be worn by another woman, or why not a man, and then on to a machine that chops up what can not be worn again. The machine chews down the garments into fibers that can then become something new, such as a pair of jeans. Everything will have a new life and H&M promises that nothing will be wasted.

In reality, the technical development of fiber recycling is not yet so far advanced that large-scale recycling is possible. At present, only a very small part of what is handed in is recycled and in many cases the fibers become too short to be used for new clothes. However, a lot of research is being done in this area.

H&M has received criticism before and some customers are skeptical of the sustainability strategies that the company presents. The Canadian News Channel CBC News discovered for example in 2018 that textiles left for H & M's collection in Canada had been resold to Kenya. Much had been dumped and set on fire under unregulated and environmentally stressful conditions due to the poor quality of the clothes.

The customer Anna Larsson is not convinced by H & M's sustainability work.

- I feel distrustful. The clothing industry itself is an environmental culprit, so the effort you make becomes a drop in the ocean. They may want to make it look better than it is. At the same time, I think it is good that they are doing something and paying attention to the environmental issue, she says.

Despite the mistrust, she has handed in garments to several chains' recycling bins. Then she has chosen to think away the negative she has heard and still hope that her efforts have led to something good.

New production is the big culprit

The largest climate impact of Swedish clothing consumption takes place at the production stage where large amounts of raw materials, energy, water and chemicals are used. The production of clothes sold in Sweden takes place almost exclusively in countries outside the EU, mainly in Southeast Asia.

Manufacturing contributes to major problems in several textile-producing regions, which pay a high health and climate price for our consumption. An example is chemical emissions that contribute to eutrophication and toxic effects in water and soil.

- The best thing we can do from a climate point of view is to stop consuming and instead use what we already have, says Sandra Roos who is a doctor and textile researcher at the research institute RISE.

She sees some problems with the fashion chains' textile collection, which she thinks can send the wrong signals to the consumer. For example, customers may get the impression that it resets the climate impact when they submit a garment, so that they without impact can buy another. According to Sandra Roos, there is a certain superstition about the circular economy.

- Circulating materials is very good, but it is probably more a way to achieve sustainability than a goal in itself. It is the reduction of resources that is the real goal and that makes the greatest benefit, she says.

A form of "greenwashing"?

H&M has received criticism that clothing recycling should be a new form of greenwashing. Increased consumer awareness and demand for sustainable products has led to more "green" marketing from companies. "Greenwashing" is a term coined in the 80's by environmental activist Jay Westerveld and refers to when companies claim to be sustainable, even though they are not. The company is riding the wave of sustainability in order to make a profit. H & M's textile collection has been criticized for removing focus from the company's large environmental impact, the new production of clothing, and because it can legitimize new purchases.

It is seldom a case of outright false marketing, but can often be about subtle and vague deception and associations. Talking about grabbing the mutual bad conscience and at the same time showing pictures of nature or using the color green and words like "conscious" are examples of this.

Sandra Roos still wants to highlight that companies like H&M are doing very well and have the financial muscle required to restructure their production. However, she is critical of the fact that several fashion chains hand out coupons when customers hand in their discarded textiles because it encourages new purchases.

H&M has chosen to decline participation in this report.

- Swedes buy about 14 kilos of new textiles per person and year.
- Swedish textile consumption has increased by almost 30 percent during the 2000s.
- The Swede throws almost eight kilos of textiles per person and year (2016). In more than half of the cases, these are textiles that could have been reused but are instead sent for incineration.
- 80 percent of the climate impact from Swedish clothing consumption takes place at the production stage.
- The climate impact can be reduced by 49 percent if a garment is used twice as many times, provided that the garment replaces a newly produced garment.