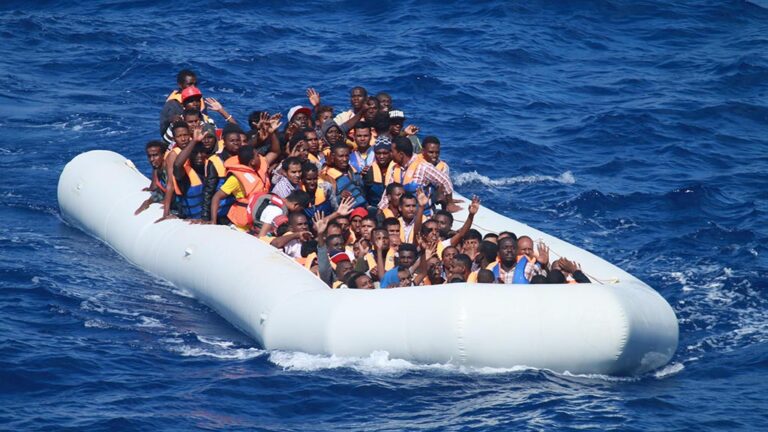 Since the EU cut the road to Europe from Turkey - through a criticized agreement with Turkey and the country's President Erdogan - the most common road to Europe has been closed. One of the few roads left today is the road across the Mediterranean from Libya. According to the UN refugee agency UNHCR, 2018 died on average six people in the Mediterranean every day. These are people fleeing war and oppression and wanting to seek a better life in Europe. At the same time, smugglers and criminal networks are exploiting refugees to make money. They exploit extremely vulnerable people.

In Libya, the situation is becoming increasingly unsustainable. After the fall of Gaddafi in 2011 and the Arab Spring, several militant groups are trying to take control of the country. The UN-run government in the western part of the country, based in Tripoli, has lost control. It is mainly threatened by the warlord Kahlifa Haftars and his forces based in Benghazi.

Haftar and his well-equipped troops have recently attacked Tripoli, where the UN-backed government is trying to defend power. The attacks affect civilians and, to a very large extent, the people trapped in the refugee camps in Tripoli. The military escalation that is taking place in Libya right now should be taken seriously. The effects of what is happening in Libya are very relevant for the EU, not least when it comes to migration policy.

Horrible in the refugee camps

Militant groups have control over several refugee camps in Libya where refugees and migrants are locked up. Only in Tripoli, according to Médecins Sans Frontières, is it believed to exist 8 refugees in the refugee camps.

The standard in the refugee camps is horrible. Many people are crammed into a small space, with little access to water and food. There have also been reports of abuse, torture and violence against refugees, most notably affects women and children in refugee camps.

It is also to the refugee camps that people are sent back if they are found by the Libyan coast guard in their attempt to cross the Mediterranean with simple boats. This is the coastguard that the EU co-finances. The EU must stop giving money to Libya and instead give aid to organizations that can go in and help people in the refugee camps in Tripoli.

But in addition to this, the EU must have a common migration policy framework. All EU countries must take joint responsibility for managing migration policy currents together. For humans will not stop moving in the world. In addition to war and oppression, we will see increased migration due to the climate crisis. According to the UNHCR, it is estimated to exist 200 million climate refugees in the world by 2050. Therefore, the world community should build systems so that people can move globally.

There must be legal routes to the EU

My and the Center Party's ambition is to create legal routes to the EU. The best solution in my opinion is for the EU to open offices outside the EU, for example in Tunis. In this way, refugees and migrants could go there to seek asylum, avoid getting into fragile boats across the Mediterranean and easily and safely get to the EU.

We also want to increase labor immigration to the EU. For those people who are not allowed asylum, but come as "economic migrants", there should be other ways to get to the EU. Many European countries need labor. We therefore want to expand the "blue card system" that exists for labor immigration to the EU today and which has existed since 2009. Blue card applies to people outside the EU who want a work visa. Unfortunately, this only applies to highly qualified jobs. I want to extend it to include all types of work - not just highly qualified jobs as today.

The EU has major challenges in the coming years, but in my opinion migration is one of the most important. I do not intend to give up until the EU enters into force a new migration policy framework where everyone takes responsibility, where we have legal routes to Europe and where not a single person will have to die in the Mediterranean.