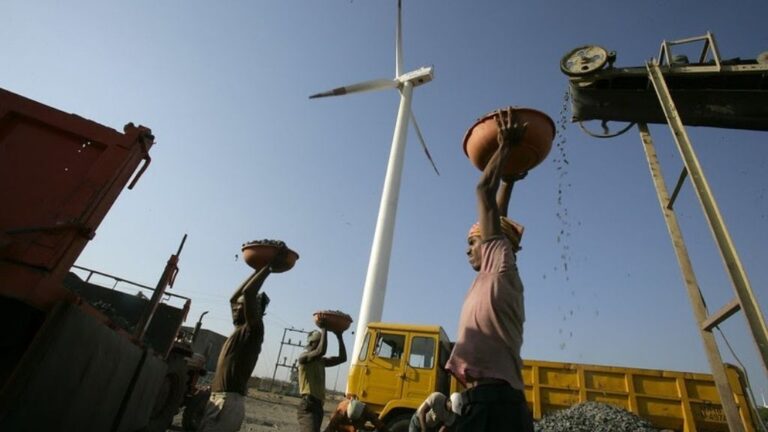 A diesel-powered stone crusher next to a wind farm in the state of Chhattisgarh. Photo: Land Rover Our Planet / Flickr.

Rich countries are better placed to reduce their emissions, but India and other low-income countries will be hit faster and harder by climate change. At the same time, India has a unique position to build its welfare with green solutions from the beginning. But for that to be possible, it is also necessary for richer countries to live up to their promises.

There is mixed news from India on the climate issue. During the COP26 climate summit, they have committed themselves to reaching net zero climate emissions by 2070. The country is investing heavily in renewable energy, but still gets 70 percent of its total energy from coal. This makes the country the third largest emitter in the world after China and the United States - at the same time as they criticize richer countries for not doing enough for the climate. After all, India has a relatively low climate footprint per capita and the question is how fair it is that they are expected to cut further.

The issue of climate justice is a major challenge at the UN climate summit COP26 in Glasgow, which began last October. The meeting is partly a follow-up to the Paris Agreement, and now the countries will tighten their climate commitments to meet the 1,5-degree target. Ahead of the meeting, India demanded that rich countries fulfill their promises of financing for climate change in developing countries.

Minister of the Environment and Climate Per Bolund (MP) said in DN that it is important that rich countries contribute.

- It is a question of credibility that is crucial for the climate negotiations in Glasgow to close. It is difficult to get more countries to raise their climate ambitions when the rich countries are not living up to their promises. For example, India has threatened that it will not submit updated commitments unless funding commitments are met.

India promised in the Paris Agreement to reduce its emissions by 25 percent by 2020. The country has so far reduced them by 21 percent, according to the climate minister Prakash Javadekar. According to the agreement, they would also get 40 percent of their electricity from renewable sources, something that is well on its way to being achieved.

However, the use of coal is a major challenge for India and its climate commitments. The country uses large amounts of coal energy, while building and planning for even more. If all coal-fired power plants continue to be used for life, India's energy sector will continue to emit greenhouse gases until at least 2070. India must tighten its climate targets and quickly phase out old coal-fired power plants and stop building new ones if they are to achieve the 1,5-degree target in the Paris Agreement. the environmental organization Climate Action Tracker.

Against this background, India is far from doing enough for the climate - and the country is defending its position with the justice argument. Global warming has been largely caused by the rich, early industrialized countries, while India's per capita energy consumption is well below the world average. At the same time, India has a need to increase the prosperity of the population and believes that they need to be allowed to emit more greenhouse gases for some time to come. But in one rapport in Center for Social and Economic Progress Authors Montek Singh Ahluwalia and Utkarsh Patel write that it is possible to do both - because new technologies have become so cheap and efficient that they could improve living standards and at the same time switch to more green energy and reduce coal use.

At the same time, they do not think that all countries should have the same expectations of reducing emissions. To be fairer, rich countries can reduce their emissions more sharply and faster, before 2050. Developing countries, which have lower emissions per capita, should have more time to adjust. In this way, global emissions can be at zero zero by 2050. The problem with this idea is that COP26 and other climate meetings will find it very difficult to decide how emissions should be distributed between countries in a fair way.

The funding is not sufficient

Large sums of money will be needed to finance climate change. An estimate for India is $ 150 billion a year. The countries took this into account in the Paris Agreement, and said that richer countries would contribute about $ 100 billion a year to developing countries. But the promise has not yet been fulfilled and the subsidies have been significantly lower than that, which India has also criticized, among other things, through the Minister of Finance Nirmala Sitharaman. The United Nations Intergovernmental Panel on Climate Change (IPCC) has now estimated that $ 600 billion a year is needed for the energy sector in developing countries. COP26 is an opportunity for richer countries to fulfill their promises and for the countries of the world to show that they are serious about climate change.

According to the IPCC's report from 2018, the world must come down to net zero climate emissions by 2050 if we are to be able to keep global warming below 1,5 degrees. We must also sharply reduce emissions over the next ten years. The use of solar and wind power is increasing, but so is carbon consumption and carbon dioxide emissions.