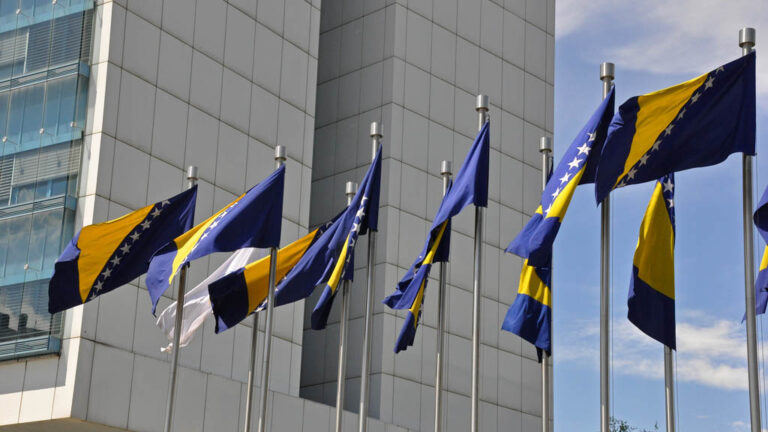 The image that Bosnia & Herzegovina will join the European Union in the near future is far from true. It has long been in the EU's interest that the Balkan countries should be able to live up to EU rule of law principles as soon as possible, not least Bosnia & Herzegovina, which has been considered to be well on its way to becoming a member.

You should definitely understand that this is something that Sweden also strives for, but this should not be what you attach the greatest importance to when we talk about Bosnia & Herzegovina. Poverty in the country is a fact there about 18 percent of the population living in extreme poverty and half of the population risks going in the same direction. The goal for us must instead be to direct resources to help the people.

The road to EU membership seems to be long as Sweden today contributes around SEK 150 million annually to support reform work in Bosnia and Herzegovina, with the hope of developing the market economy, strengthening democracy and contributing to reduced emissions. I want to say that it is money that is more or less thrown into the lake and is a wrong priority that Sweden does. None of the goals of the reform work will be possible as long as the sky-high corruption in the country remains.

According to Transparancy International Bosnia & Herzegovina is one of the most corrupt countries in Europe and gets only 38 points on a scale between 0-100 (where 100 is no or very little corruption). And according to Freedom House the country's leading politicians look to their own private interests instead of improving the lives of the citizens.

That politicians by all means benefit their own interests and snatch a large share of the country's assets, while a majority of the people in the country are fighting to get milk and bread for the day, is beyond my comprehension, but is unfortunately a fact. We can see that the population ranks corruption as one of the most serious problems the country has. Corruption will remain regardless of how much money Sweden contributes to work for democratization, as the prioritization is misdirected.

We should of course praise Sweden's attempts to contribute in various ways to Bosnia & Herzegovina becoming a more democratic country to a greater extent, Sweden does this, among other things, through supportive work on public administration transparency. However, I think it is naive to say that a comprehensive regulatory framework will be transposed into Bosnian law, which is a must for future EU membership. As long as corruption is so great, it is impossible and it is only when politicians themselves decide that the country should be driven in a more democratic direction that change is possible. Changes must therefore come from within. Unfortunately, the help of external actors is minimal to create an extraordinary change. Sweden's aid would instead be much more useful if it came to the people's reach.

I would like to say that Sida's urgent efforts with humanitarian aid have a much greater effect because it is the people who directly take part in the assets. An example is the humanitarian crisis in Venezuela, where they went in with SEK 65 million and provided people with necessities. The same principle must apply to the people of Bosnia & Herzegovina. In order to really give people better living conditions, we must realize that the solution does not lie in contributing SEK 150 million to the Bosnian state - and a minimal share to business and civil society - to reform various areas of society. Instead, Sweden must go in with the money itself to distribute to the needy.

Contributing to reforming different areas of society sounds good, of course, but in practice it is different. Had the politicians in Bosnia & Herzegovina wanted to go in that direction, we would also have seen a positive development, where the people would also have had better living conditions, which is now far from the case. Poverty is still high and will continue to be so, but may be reduced somewhat. The big problem now is that the financial support from Sweden is managed by those in power in Bosnia & Herzegovina and the Bosnian people are unfortunately not allowed to take part in this.

Sida's website states that their financial support to countries "strengthens their democracy and creates conditions for them to reduce poverty themselves". The idea is good, but if we look at Bosnia & Herzegovina and what it has been like for some time, we can state that the standard of living has not improved since the Bosnian war ended. The country is not developing sufficiently and the majority of the people do not have the necessities to which they should be entitled.

Bosnia & Herzegovina is one of Europe's poorest countries and we must ask ourselves what we should really prioritize. Should we really continue to work for a Swedish contribution that goes to the Bosnian government where the risk is high that the money ends up with corrupt politicians who definitely do not intend to fight poverty or for that matter try to reach the EU criteria for future EU membership . Or do we instead choose to prioritize SEK 150 million where they do the most good, namely aimed directly at the people so that they get the necessities they need, and a better everyday life? In my opinion, the question is easy to answer and I would therefore like to appeal that such a priority is necessary for the everyday lives of our European friends.

Stop making such large contributions to a corrupt state apparatus and focus instead on fighting poverty.