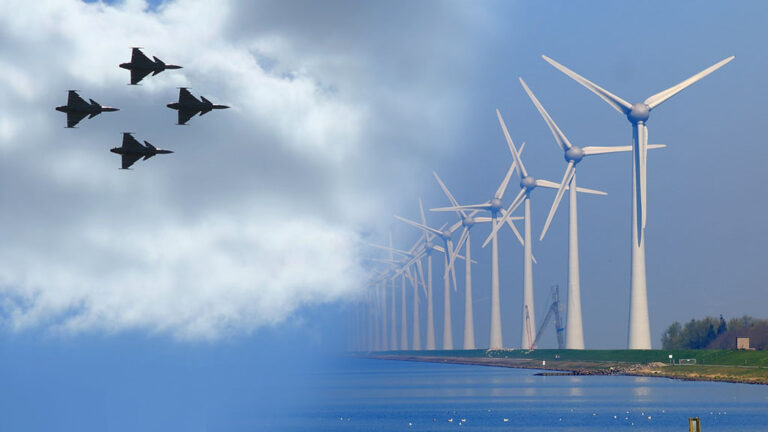 The Swedish Armed Forces has ordered 60 new Jasplanes. The cost for them corresponds to 3000 wind turbines, the debaters write.

The climate is in crisis and the future of humanity is threatened. But instead of investing resources in preventing a climate catastrophe, Sweden is investing billions in preparing for war. We must stop buying expensive Jasplan and spend the money on high-speed trains and solar power parks, write representatives of Svenska Freds in Stockholm.

The climate crisis is humanity's biggest crisis to date. In 2018, no region was unaffected by the effects of an increasingly warmer planet. Island nations such as Kiribati, the Bahamas and the Maldives are forced to plan for the relocation of their entire populations as sea levels rise, while water sources in other countries are drying up and forcing people to migrate.

Climate change is ranked by the World Economic Forum as the single largest global security risk and has been included in national security plans worldwide. But why is the magnitude of the threat not reflected in how our common resources are distributed? As protection against the greatest security threats of our time, military means are ineffective. We demand that our politicians redistribute economic resources from military defense to climate change, and that now.

Sweden is often highlighted as a nation at the forefront when it comes to investments in climate and green technology. Ahead of the extraordinary UN summit where Greta Thunberg gave her iconic speech, Sweden announced that our contribution to the Green Climate Fund will be doubled during 2020-2023. This corresponds to an investment of SEK 8 billion. What is not as often highlighted is that Sweden invests SEK 275 billion in military defense during the same period. A large proportion of our public funds are thus invested in preventing a threat that is much more unlikely than the climate crisis we are living in the middle of.

For the military's newfound money, several major purchases of munitions are now planned. Already today, the Armed Forces is waiting for 60 ordered Jas Gripen E, for a cost equivalent to 3000 wind turbines or over 2,1 million safe deliveries. The rearmament trend is global and last year the countries of the world laid according to Stockholm International Peace Research Institute SIPRI over $ 1822 billion on military spending. This is the highest sum since the measurements started in 1988.

The link between environmental issues and sustainable peace and security has always existed, but it is in recent years that climate change has become visible as one of the biggest global threats to our security. The number of climate-related disasters has doubled since the 1990s. Extreme weather is causing more and more humanitarian crises and disasters, communities paralyzed by floods, droughts and broken infrastructure.

The risk of war over natural resources increases and people are forced to flee for lack of access to food and water. In 2017, the UN Security Council adopted Resolution 2349, in which climate change is pointed out for the first time as a cause of instability in the conflict around Lake Chad. Taking the climate issue seriously is a necessary piece of the puzzle in the work for sustainable peace and security.

The whole society must change

For every report published by the UN's climate panel, the IPCC, it becomes clear that "business as usual" is not an option. The whole society has to change and then small adjustments of decimal places in our climate budget are not enough. Our joint efforts must reflect the challenges we as a society now face. But we must not sacrifice our healthcare, schools or international aid. Let the choices be between Jasplan and high-speed trains, shooting ranges and solar power parks, soldiers and climate research. According to SIPRI is enough less than 20 percent of the world's military spending to cover the annual cost of educating all children and eradicating hunger and poverty.

Now climate change requires our full attention to give humanity a chance. Today's institutions and systems have not built themselves, they are the result of common priorities and initiatives. Let us set the direction for the paradigm shift that seems more and more inevitable. We urge politicians and decision-makers to have the courage to make the right decisions. From military defense to climate, and now.