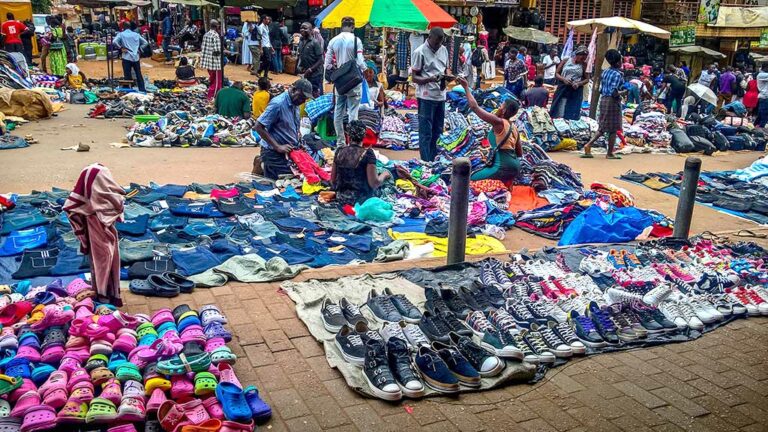 At the clothing market in Uganda's capital Kampala, many families get their livelihood from the sale of used clothes, the debater writes. Photo: Kayaga Andrew

Making our clothes is often a dirty and resource-intensive process. It is therefore welcome that there is now more and more talk about reusing and recycling clothes. But unfortunately, several challenges remain - recycling clothes is so far inefficient and a large proportion of clothes are thrown away or become rags in India or Pakistan, writes Annie Sturinge.

In recent years, the negative environmental and climate impact of the clothing industry has received increasing attention. The fact that a used item of clothing became the Christmas present of the year 2018 was an important input in the debate about a more sustainable consumption and production of clothing. The clothing industry has long been characterized by a wear and tear mentality. Of the 150 million tonnes Clothes and shoes that are sold annually worldwide end up in a large proportion on rubbish heaps or incinerated. In Sweden, clothing purchases are the fourth largest source of carbon dioxide emissions. Swedish consumption of textiles, especially clothing, has increased 30 percent since the year 2000. Every year, we Swedes buy 13 kilos of textile per year. Eight kilos of these, often fully capable garments and textiles, end up in the household rubbish.

An increasing number of clothing chains offer collection of clothes in their stores. The idea is that the submitted clothes will be recycled and become new garments - and thus create a kind of clothing cycle where the customer submits a garment and with a clear conscience can buy a new one. The collected clothes are passed on for sorting. Depending on the condition of the clothes, they are resold as clothing or recycled to be converted into other products.

In Sweden, it is currently only recycled one percent of the clothes submitted to produce new garments or textiles. There is a lack of technology for recycling garments consisting of mixed materials, such as cotton mixed with elastic materials.

About half of the clothes submitted are in good condition and can be sold second-hand in the EU or on the second-hand market in developing countries. About 40 percent of the clothes are of inferior quality and are mainly used for insulation or blankets in countries such as India and Pakistan. The remaining 10 percent is burned.

That clothes are recycled into rags means one downcycling where high quality products are transformed into low quality products. This entails large losses of resources. Spinning, washing and dyeing clothes are resource intensive in the form of energy, water and environmentally hazardous chemicals. Research is ongoing around upcycling where you instead take advantage of the fibers in a garment for new fabric and new garments. This would have meant a much smaller environmental impact, but so far the technology is lacking. Lots of material, around 10-40 percent, is also lost during the actual clothing production that now mainly takes place in Asia.

The export of clothing remains important

A significant proportion of all clothing collected in Sweden by aid organizations and clothing stores is exported. For Sweden's largest retail chain of second-hand clothes, Myrorna, was sold in 2016 only 11 percent of all textiles collected in stores in Sweden. As much as 84 percent was sold in the foreign market. The Swedish export of used clothes in 2014 was estimated at approx 21 000 tons. The largest share is sold by charities that use the proceeds for charity. The textiles are exported primarily to Poland and Germany for sorting and further for sale to Eastern Europe, Africa and Asia. The social and economic effects of trade have long been debated. Union to union believes that the used clothes are flooding African countries and knocking out the domestic textile industry with high unemployment as a result. In East Africa, one of the main destinations of the clothing flow, decision-makers are working for an import ban to protect domestic clothing production.

At the same time, many people benefit from the clothing trade, I myself have noticed from visiting one of the largest markets in East Africa, the Owino market, in the Ugandan capital Kampala. Here you will find sellers who in small stalls or at scattered piles of clothes sell all sorts of used garments - swimwear, prom dresses and ski overalls. In the crowds around the piles of clothes, an intensive search and bargaining takes place. The large commerce around the used clothes shows that the trade is favorable not only for sellers but also buyers who are offered a very affordable alternative to newly produced store clothes.

That the import of used clothes can have several positive effects is confirmed in one study by the Nordic Council. The study believes that although imports may be problematic for domestic production, the main threat to the backward African textile industry is not used clothing but the import of cheap newly produced textiles from Asia. The clothing trade is instead considered to create thousands of jobs linked to sorting and selling clothes. The 12 tonnes of clothing exported from the Nordic countries to the African continent each year are estimated to support 10 informal market vendors and their families.

That used clothes are shipped from Sweden across Europe and all the way to East Africa is not optimal. At the same time, there is no market for these garments in Sweden. Although the social and economic effects of this trade are debated, it is currently a prerequisite for the vast majority of Swedish garments to be reusable.

A more sustainable restructuring of the clothing industry also requires that we consumers change our habits. Swedes tend to have far more clothes than we need. The majority of us, 7 10 of, use only half of the clothes in our closet. The conscious consumer needs to buy fewer clothes and use their garments longer. New business models also aim to shift consumers' focus from owning clothes to renting instead, for example through clothing libraries where you can borrow clothes or companies that rent out and deliver a new set of freshly washed and ironed clothes every month.

At present, the main way to reduce the climate impact of the clothing industry is to reuse clothing. The export of used clothing is an important part of extending the life cycle of clothing. But reuse of clothes also needs to be improved - too much clothing is thrown away and wasted.

Once again, we consumers have a role to play. By buying better quality clothes, our garments last longer and they have a greater chance of finding a new owner in an East African market instead of ending their days as a ground cloth in India.