The rights of indigenous peoples are now recognized by the international community. But when it comes to education, the legacy of past discrimination has not been tackled.

The use of education as a tool to ensure the submission of indigenous groups has a long and varied history. Today, the states responsible have started to apologize - but they must follow this with action.

In 1837, the British government initiated a system of segregated residential schools that would go on to be set up in Canada, the United States, Australia, and New Zealand. In an attempt to secure cultural assimilation of indigenous populations, children were removed from their communities and stripped of their language, culture, and traditional practices. At best, experiences were characterized by poor quality education and untrained teachers. At worst, children were subject to abuse and humiliation. And this is not a distant past; in Australia and the USA, segregated residential schooling continued until the 1970s, while in Canada it persisted until 1996.

There is another way in which these policies are not distant. A parallel can be found in the treatment of the Sami people, the only recognized indigenous people of Europe. In Sweden, schools were established in the early 1900s for Sami children, driven by racial biology and a desire to bring children into mainstream Swedish culture. While possessing its own unique narrative, the Sami experience shares sadly familiar qualities: the Sami were treated as inferior, deprived of basic human rights and self-determination.

The legacy of these policies persists. Today, in many regions, such as those mentioned, indigenous communities continue to suffer from inferior schooling or a complete lack of formal education. Without the opportunity to shape culturally-sensitive and appropriate education systems for their communities, the content of education made available to indigenous peoples often reflects former assimilation programs. The promises of the international community have not yet translated into tangible results.

Sweden is a case in point. It is, proportionately, the largest supplier of Overseas Development Assistance in the world. It devotes billions to the cause of quality, equitable education overseas. But it has not turned its gaze inwards. UNESCO has classified all four Sami languages ​​in Sweden as'endangered'. The UN has criticized the small amount of funding available for Sami language teachers.

Tools such as the ILO's Indigenous and Tribal Peoples Convention No. 169 have the power to bind states to the protection of indigenous peoples' rights. ILO 169 rightly emphasizes the importance of providing communities with a voice in the development and implementation of education programs. Amongst the countries missing from its list of signatories are Canada, the United States, Australia, New Zealand, and Sweden.

As Justin Trudeau made clear in his 2017 apology for Canada's residential schools, "saying we are sorry today is not enough." The principles of ILO 169 must be adopted. Indigenous people need to be given the opportunity to nurture their languages, cultures and traditions, as well as exercise their economic, social and cultural rights, through education. Only by re-thinking education for indigenous populations can we avoid replicating historical abuses.

Of: Siobhán Coskeran and Tessa Stockburger

Tessa, from Australia, and Siobhán, from the United Kingdom, are studying a Master's Program in International Development and Management at Lund University. 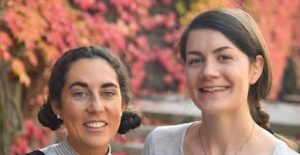