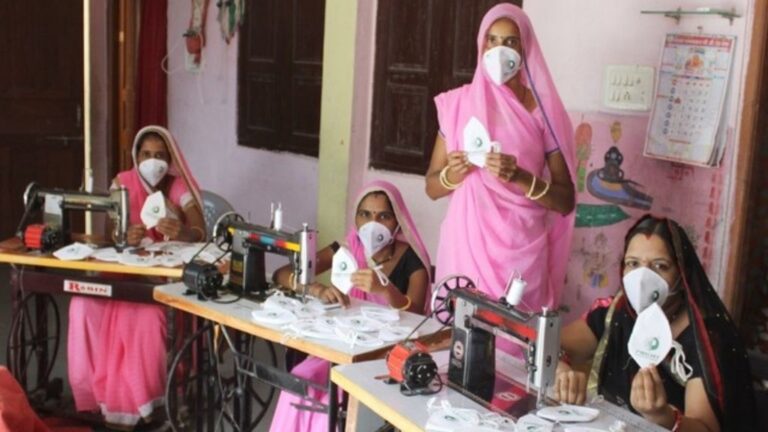 Resistance. A force to withstand difficulties, crises and chaos. What makes a person strong? Is it possible to provide outside support to build an inner strength? After a year of extreme difficulties for many of the world's poor, we need to ask ourselves the question - how do you build resilience?

Of course, there is no easy answer. Conditions, living conditions, customs, lack of equality and much more come into play, but it is certainly possible to find a few common denominators. We at Hand in Hand support and train micro-entrepreneurs in the informal sector. We recently conducted an external evaluation of a project to empower women in Madhya Pradesh, India. Hand in Hand has worked together with Läkarmissionen to strengthen women's empowerment and livelihood opportunities. The project was aimed at 12 women in the most vulnerable and marginalized households, almost all of whom belonged to the groups known in India as OBC, "other backward classes" and those formerly called casteless, Dalits. Both groups are socially and educationally disadvantaged, many could neither read nor write. Everyone lived in severe poverty.

Is it even possible to support women in the situation of starting small businesses? Is it a sensible method of combating poverty? Clearly, it is a challenge to first start with the most basic rights, such as learning to read, write and count - and then move on to training in how to start and run a business.

Without going into details in the evaluation, there are still some startling results to mention. 85 percent of the women who were part of the project now run their own micro companies. For almost everyone, 98 percent increased family income and on average, income increased by 70 percent in just three years. Financial security improved significantly.

The evaluation was completed during India's shutdown due to the corona pandemic. This gave the evaluation team an unimaginable opportunity to study the project's sustainability and effectiveness. As for many other people in India, covid-19 and the restrictions that were introduced to limit the spread of the virus led to dramatic losses in income. The women who were part of the project saw their income halved. The interesting thing was that almost everyone, 96 percent, said that they were less hard hit than their neighbors, who were not involved in the project.

So despite the fact that the women in the project lost a large part of their income, they themselves considered that they had done relatively well. Part of the explanation probably lies in increased self-confidence. All women had improved their reading and writing skills and felt more secure in government contacts. They therefore knew and could benefit from public support systems to a greater extent. Lina Gonzalez Piñeros, one of the three independent evaluators, also sees another explanation.

- Many larger projects fall on the focus only on results and activities, while this project has focused on building contacts and cooperation. Every day, the self-help groups strengthened ties with each other, but also with the whole local community, even with those who were against the project from the beginning, says Lina Gonzalez Piñeros.

The evaluation shows how contacts were created between project participants and local government officials, banks and other community services. They found a common benefit of sharing experiences. This gave women a stronger voice because they had access to information and knew how to use it.

The Hand in Hands model is based on the idea of ​​self-help. Trying to give people the right conditions to be able to improve their living situation. The basic idea is to strengthen the individual, but at the same time build sustainable social networks. Alone is not strong, especially not in times of crisis and unexpected difficulties. Instead, resilience increases in cooperation with others. The stronger the network a person has around them, the greater the power to withstand difficulties.

According to the original definition of sustainable development in the Bruntland report (1987), which is also the basis for the global goals, it is a development that meets today's needs without jeopardizing future generations' opportunities to meet his needs. A development based on three dimensions - ecological, economic and social.

Do we understand the importance of social sustainability, or is sustainability work too focused on the environment and the economy? Social sustainability seems to be more difficult to interpret and more difficult to break down into goals and measurable results. That dimension seems underestimated and less noticed. A post-pandemic world, in addition to environmental and economic sustainability, will need a greater focus on strong social structures and cooperation between people, institutions and other actors in order to build resilience to future crises. This is the only way that multidimensional poverty can be fought in a powerful and sustainable way.