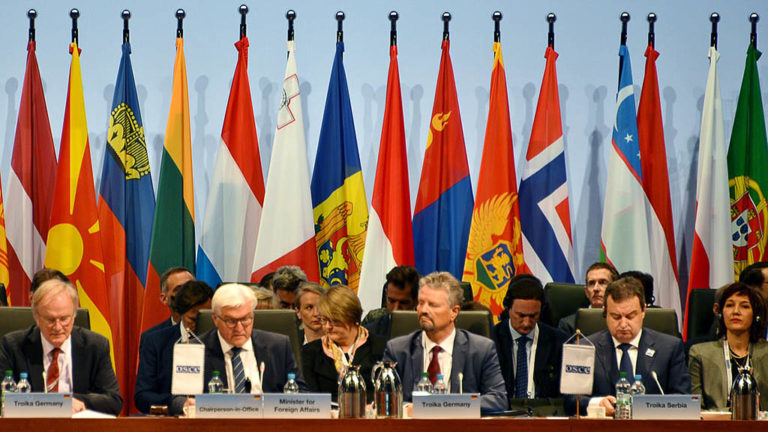 The Organization for Security and Co-operation in Europe (OSCE) meets in Hamburg. Photo: Glyn Lowe (CC BY 2.0).

Preventing armed conflict does not gain political points in election times but is a prerequisite for lasting peace. We must build trust and friendship instead of suspicion and a reactive security policy, write Professor Lars Ingelstam and Kristna Fred's Lotta Sjöström Becker.

Some things we take for granted:
• Those who eat wisely and remember to brush their teeth do not get caries so easily and do not have to go to the dentist as often.
• When we learned to build houses from fireproof material and with separate sections, the fires became rarer and the fire brigade's calls fewer.
• Separating sulfur oxides and other acidifying gases before they are released into nature is better than having to whitewash lakes and forests afterwards.

So: it is cheaper and better to prevent something bad from happening than to have to take care of it when it has already happened. The principle of prevention should also be at the heart of armed conflict. The way of thinking is recognized by almost everyone. Nevertheless, proactive and preventive measures must still be left behind for reactive action: threats, armaments and preparations for war. We should change that.

Peace movements around the world have - rightly - attached great importance to what Berta von Suttner so far-sightedly formulated in 1889: "Down with the weapons!"

A lot has happened. Ministries of war have become ministries of defense, intergovernmental organizations such as the UN and the EU have been created, concepts such as common security and human security have had a certain impact. But "security policy" is still strongly colored by military thinking and gun threats.

When we in the Christian peace movement want to influence this - and we do so, among other things, with the new scripture Swedish security policy for peace, 2018 - we need to find a different starting point than threats and deterrence.

Conflicts will always exist and are often useful and instructive as they force us to develop. Recognizing them and taking care of their causes at an early stage is the best way to make them constructive and prevent them from degenerating into violence, massive destruction and unreasonable suffering for countless fellow human beings. The good news is that there are now better conditions than ever for such a preventive policy in reality.

20 years ago, Sweden took a clear political position. In 1999, the then Minister of Foreign Affairs, Anna Lindh, presented a thoroughly elaborated proposal for a Swedish action program to prevent armed conflicts (plus a small yellow booklet in English). It had emerged in close collaboration with civil society organizations and was confirmed by a unanimous Riksdag. The summary reads as follows:

We need to promote new attitudes in international diplomacy, international peacekeeping activities and development cooperation. … By shifting the focus from later phases of crises to the early warning signals, we can finally enable the necessary early action.

It is also pointed out how much cheaper it is to prevent than to intervene when war and armed conflict have already broken out.

Prevention is back on the agenda

The Swedish initiative received a great deal of attention in the international community for some time, but since 2001 it has been completely overshadowed by the "war on terrorism". Strong statements have been made time and time again by the UN Secretary-General: both Kofi Annan and Ban Ki-moon considered that prevention should be the first priority of international cooperation.

There are signs that the issue is back high on the international agenda - where it should of course have belonged all along. In a recently published large (341 pages) study from the World Bank and the UN (Pathways to Peace, Inclusive Approaches to Preventing Violent Conflict. Washington, DC, 2018) 25 case studies from around the world are reported. The study clarifies the factors that can lead to violent conflict, and points out paths to early action. The analysis is summarized as follows:

Prevention works, saves lives and is cost-effective, but there are no strong driving forces to cooperate and act at a sufficiently early stage. There is an urgent need for more collective solutions at regional, national and local levels.

In Pathways, instructive examples from both rich and poor regions are presented. But it is the developing countries that dominate. It is in and between these that the clearest progress can be noted.

Development cooperation is an example

As we mentioned earlier, our country has special reasons to take this issue very seriously. The Ministry of Foreign Affairs and Sida have contributed to Pathways. We Swedes can, as before, pursue the issue internationally, which will certainly happen. But what do we do ourselves here at home?

In the policy area of ​​development aid and development cooperation, the idea has taken root and is now increasingly characterized by Sweden's cooperation with poor countries. As early as 1988, it was stated "without peace no development, without development no democracy, without democracy no peace". Concrete things happened: around the year 2000, 57 Swedish civil society organizations carried out 68 conflict transformation projects in different parts of the world.

In recent years, Minister for Development Aid Isabella Lövin has been very clear and pushy: all Swedish development assistance must be "conflict-aware". Development cooperation is a role model and has a lot to contribute to a healthier attitude towards relaxation and lasting peace.

Cooperation is the solution

With regard to our immediate area, the Baltic Sea region and Russia, however, the attitude is different. Since Russia was declared an enemy 5 years ago, armor, suspicion and images of enemies have dominated. That does not have to be the case. When we ask ourselves how war has been avoided in the Nordic countries (204 years) and in Western Europe (73 years), the answer is simple: cooperation. By doing things together, long-term and broadly, we can create a peaceful development - across from the "deteriorating security policy situation".

There is no quick fix, but it is the only way. Specifically, it is now important to use the partner organizations we are members of, which apply to both the EU and the Organization for Security and Co-operation in Europe OSCE, and through them provide political support and strengthen civil society actors. In this way, trust and friendship can be built instead of a reactive security policy that is based on suspicion and which is now too easy to take root.