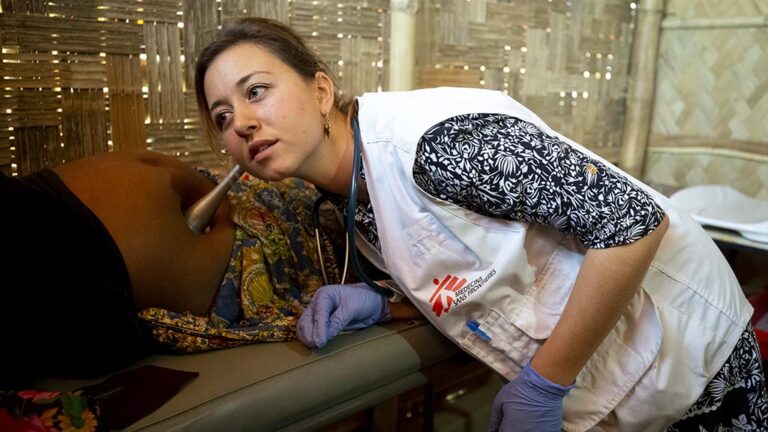 MSF often uses metaphors in its communication. It gives confidence, according to a research study by Anna Vogel. Photo: Elena Di Natale

How aid organizations communicate with politicians and the public is important - both to gain trust and funding. My study of Doctors Without Borders shows that everyday metaphors are an important tool for success, writes linguist Anna Vogel.

Language matters, most people realize that. But why do we not take advantage of the language's opportunities to convince when we have something important to say? In order to reach out with a message and influence the media, politicians and potential donors, organizations working with aid must use the language in a conscious way. But does it matter what an organization says, is it not about what it does? Absolutely, but we find out what an organization does through language.

Research shows that metaphors increase the reader's commitment (Kövecses 2010). But metaphors must be chosen with care. They should not be too strong, because then they can be perceived as frivolous (Pilgram 2019). It is better to use everyday metaphors, which are so common and conventional that they go "under the radar" of the reader. An example of such a metaphor is "Support us ”, which is aimed at readers and appears several times on Médecins Sans Frontières' website. To support means to exercise power, and the website visitor is attributed power in this way. In studies where brain flows have been measured when people read texts with and without metaphors, it has been seen that such common metaphors increase our commitment (Citron et al. 2016).

Metaphors show who does what

Médecins Sans Frontières uses everyday metaphors to show how the tasks are distributed. They themselves take responsibility for the work, which can be seen in metaphors such as "our work, our work areas, spring report and our team". Even in metaphors like “We… driver mobile clinics along the railway tracks in different parts of the country ”is given strength to the organization. But readers (website visitors) are also given responsibility by being described as powerful, thanks to several metaphors with "support", for example "support us ”which appears several times on the website.

On the other hand, the needy are reflected as powerless. The web texts I have examined are all about migrants, and without exception describe their vulnerability. In the texts, the migrants lack power and resources. The description of the migrants underlines their need for help and support from the organization and from the potential donor.

Metaphors present the work as meaningful

Previous research has shown that metaphors can express positive or negative values. One such example is to describe something abstract as having a path, with start and finish (Lakoff & Johnson 1980). By telling how someone comes "forward" or "in goal" the process is seen as successful and meaningful. MSF often uses this metaphor. One such example is “A team also has gett care for about 1500 people in the village of Moke ”. Ge is metaphorical here, as care includes conversation, diagnosis, examination, prescription of drugs, record keeping, surgery and other types of treatments that do not necessarily involve the handing over of an object; ges in its concrete sense.

Another example where a metaphor expresses a positive value is if something is described as whole, as opposed to if it is described as in parts. The name of the organization itself, “Physicians Without limits" is in itself a positively charged metaphor, as it expresses a whole: physicians who see the world as their field of work, without dividing it into smaller pieces with boundaries in between.

You who work within an organization and want to reach out with the important contributions your organization makes can learn a lot from MSF's work.

How to increase the impact with the help of metaphors

Do not put your candle under the bushel. Let the important work your organization does shine brightly. With the help of metaphors, you can engage and influence.

Read the entire research article by Anna Vogel in The development archive.

Pilgram, R. (2019). The Rhetorical Potential of Metaphor. Presentation at the conference "The Creative Power of Metaphor", Oxford March 29-30, 2019.