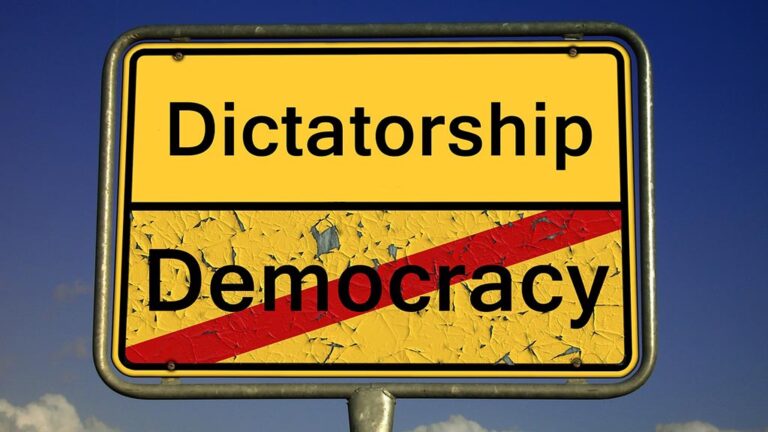 The democratic space is shrinking in the world. In many places, socially critical voices are silenced through threats, harassment and repressive laws. This year Declaration of Foreign Affairs - which will guide the government's goals and priorities during the year - was therefore presented an offensive for democracy. The so-called "democracy offensive" is the government's investment in promoting and preserving democracy in the world through Swedish foreign policy.

Birgitta Weibahr, working representative for democracy and human rights at Sida, works to create conditions for democracy through state aid in the form of development cooperation. Sida does this by, among other things, supporting organizations at international, national and local level that deal with these issues.

According to Weibahr, Swedish development cooperation should not be about supporting democratization processes to overthrow authoritarian regimes or achieve ideal societies. It is rather about creating conditions for people to have the opportunity for change, as the purpose of development assistance is about better living conditions, she says. With that said, Weibahr clarifies by explaining that there is no thought of political globalization of democracy in her work.

- Some take note that the foundations of democracy are historically based on European principles and values. Democracy mobilizes globally among other political ideologies that are both for and against democracy as well as respect for human rights. It is therefore easier to dismiss the idea of ​​democracy as a Western phenomenon, says Birgitta Weibahr.

In addition, she believes that we should not ask ourselves whether a democratic development is appropriate or not:

- Democratic development is always desirable. It is more a question of whether a democratic government is possible or not, depending on the conditions that exist. Understanding the context is central, Birgitta Weibahr explains.

Magnus Walan, senior policy adviser at the aid organization Diakonia, believes, however, that new methods may be needed as the democracy-offensive government has developed current aid. He thinks that other actors need to do more for human rights and democracy.

In the debate article "Dare to give smart aid, new government" Magnus Walan writes, among other things, that the Swedish embassies should cooperate with the local civil society and human rights organizations. Walan wants human rights to permeate everything the embassies do, not least their work to promote Swedish exports, for example. The embassies have in fact contributed to the sale of Swedish war material to nations that violate human rights.

According to a book by the UN Development Program UNDP The number of democracies in the world has increased compared to 40 years ago. But in recent years, at the same time, the democratic space for civil society organizations and human rights defenders has diminished. Weibahr believes that it is a worrying global trend that democracy is losing ground, but points out that there can be many differences between countries. According to Freedom House Progress was made in 2019 in countries such as Malaysia, Ecuador and Ethiopia. What the future prospects look like and whether the negative global trend will continue can only be speculated about.

The 2019 offensive for democracy is part of Declaration of Foreign Affairs. It was presented by Margot Wallström during the government's foreign policy debate.

This offensive for democracy must permeate all foreign policy for the development and maintenance of democracy in the world. It means, among other things, that democracy assistance is increased.