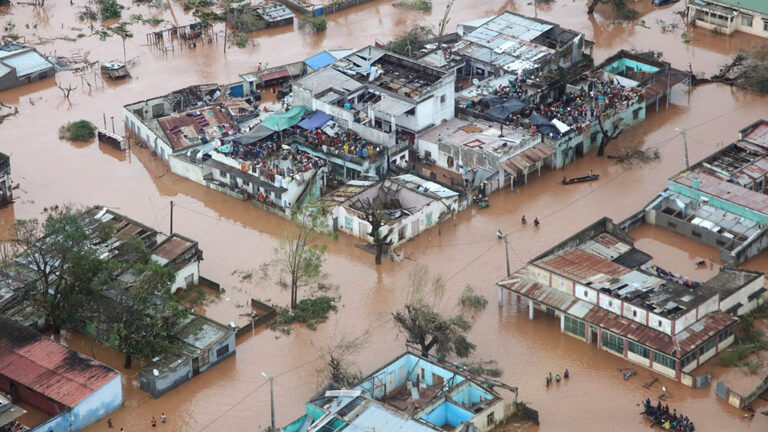 One year ago, Mozambique, one of the poorest countries in the world, was hit by double cyclones. The cyclones have been described as the worst climate-related disasters to ever hit the southern hemisphere. They caused floods, destroyed homes and infrastructure. Floods in the north combined with droughts in the south put millions of people on the run to seek security and humanitarian aid. People all over the country were starving and seeds to be used next season were destroyed. Today, a year later, is calculated 2,5 one million people are in need of humanitarian assistance.

There is great inequality between which countries contribute to the climate crisis and which may take the brunt. According to a report which was published by Oxfam In the autumn, the average carbon footprint of the richest percentage of the world's population is close to 175 times what the poorest percentage contributes to. The increasingly extreme weather in the world is sabotaging the work of many low-income countries in achieving the global goals for sustainable development (Agenda 2030). Climate-destroying activities that can help achieve the sustainability goals in some countries can create obstacles to achieving the same goals in others.

Women and children are generally most exposed to natural disasters. According to a new report by Oxfam It has been more difficult for women in Mozambique to recover from the cyclones. Only 25 percent of the official land contracts in the worst affected regions belong to women. This has made it more difficult for women on the run to protect their property and land, and they have also been de-prioritized in the distribution of alternative land. The organization Human Rights Watch also has reported that leaders in local communities have forced women to have sex in exchange for help and food after the disaster.

Despite the devastation and problems caused by the cyclones, Mozambique continues to do its part to achieve the global goals of sustainable development. Then an equal society is one prerequisite for sustainable development, the government has dedicated March 2020 to “Women's Month”, an initiative to work towards achieving the sustainability goal of equality between women and men. During the month, the government will organize lectures, debates and cultural activities to promote gender equality.

If a country that has been hit hard by the climate crisis can still initiate new strategies to work towards the sustainability goals, then we in Sweden can also do more. With ten years left until 2030, it is time to reflect on how climate-related issues affect the long-term efforts to achieve global goals around the world. Our efforts in Sweden can prevent future natural disasters, such as the one in Mozambique.