In a investigation from 2015, where people in nine sub-Saharan countries had to prioritize the most important development issues, health ended up at the top. Illness means for a person living in poverty not being able to support themselves, being forced to take on debt to pay for medicine and care, and the children not being able to go to school. Poverty increases the risk of illness and in many cases illness leads to poverty. Preventing disease is therefore one of the most cost-effective ways to combat poverty, and to contribute to the development of poor countries.

Goal 3 in Agenda 2030 is about health and well-being, and the goal includes eradicating HIV and AIDS, tuberculosis, malaria and the neglected tropical diseases. Successful eradication of these diseases requires major investments. Not least, research is needed to develop new tools in the form of diagnostic tools, drugs and vaccines, and new methods to deliver them. The fact that the number of malaria-related deaths has more than halved in recent years, as a result of better treatment and preventive measures, shows that new knowledge helps. 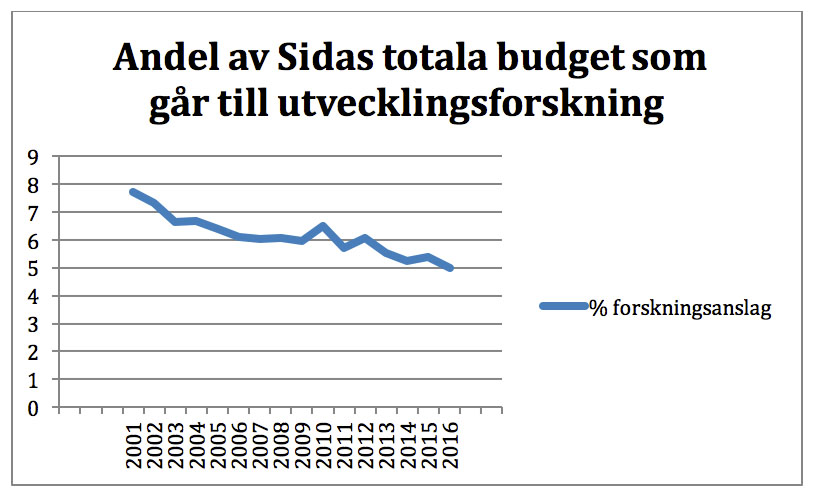 Before the grant was transferred to the Swedish Research Council, special investments were made in Swedish research, of which the largest single investment was support for research on HIV and AIDS - an investment that has had and still has great significance for the fight against HIV, AIDS and related diseases. The investment also made Sweden a prominent research nation in the field.

Today, no such special investments are made and the funding for Swedish development research continues to decrease, as do the funds for health research.

The number of applications for funding for development research granted by the Swedish Research Council is generally lower than was the case when the applications were administered by Sida. In 2013, for example, 28 applications were judged to be highly relevant to the subject area global health, but only 16 of these received grants. This means that just over 40 percent of the applications with high quality and relevance were not approved.

Invest in the long term

The development of Swedish research on global health issues looks increasingly worrying. Appropriations have decreased over time. In connection with the transfer of support for Swedish development research to the Swedish Research Council, the number of researchers receiving support each year was more than halved.

It has already been difficult for younger researchers to get support, and those who succeed have to make do with short-term grants that, despite increasing in size, are still too small for long-term, forward-looking projects. A long-term investment in the financing of long-term projects and the recruitment of young researchers is a prerequisite for meeting the challenges in global health, where infectious diseases are a crucial part.

We live in a time when epidemics are increasing. The Ebola epidemic showed how important it is with foresight to have diagnostics and medicines on standby when it comes to. That is why we need Swedish competence. We need to be prepared to face the future with our own resources, and to contribute to meeting the goals of eradicating the major epidemics by 2030.