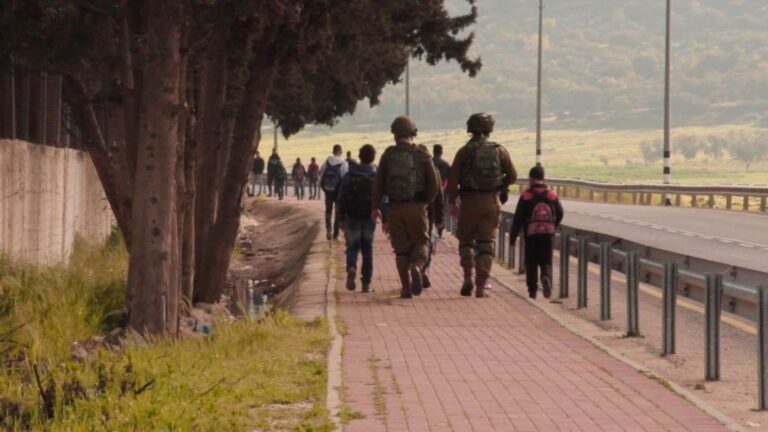 The school is located between the villages of as-Sawiya and al-Lubban ash-Sharqiya, just south of Nablus on the West Bank. Near the villages, up on the surrounding mountain peaks, you can see Israeli settlements and outposts.

To get to school, many children have to walk several kilometers along the unsafe highway 60. The school is located in Area C, which is controlled by the Israeli military. For a few years now, the road outside the school has been constantly patrolled by soldiers.

Despite last spring's media interest in the unrest in Israel and Palestine, the situation has not changed. I'm reading an article in al-Jazeera about the escalated military presence at the school and how children try to take alternative routes there to avoid the soldiers. Even the magazine Middle East Eye reports on a deteriorating situation and interviews the principal who says that the attacks on the school have increased in the past year. It has been particularly bad since the start of school in September - in just two months, 15 children were arrested by the Israeli military.

The situation at the school is by no means unique. Ecumenical Companion Program has long reported systematic violations against school children in the West Bank and East Jerusalem. Children all over Palestine go to school for fear of what their school day might mean. Will they be able to get to and from school, will their siblings be arrested by the military or harassed by settlers?

In addition to the soldiers' constant presence, many schools in the Nablus area are affected by violence from settlers. As a result, you have to Urif boys school had a high wall built to protect the children from violence. In other places, such as in Hebron, school children are forced to pass roadblocks where they are sometimes physically searched. In East Jerusalem, where house demolitions are taking place on a large scale, children's schools are simply in danger of being destroyed. The deficient infrastructure at the West Bank also contributes to a dangerous situation for children who need to take long and risky roads to school.

Children are often arrested on the way to or from school, sometimes in the schoolyard. Every year is seized between 500 and 700 Palestinian children of Israeli military. They are often accused of throwing stones at soldiers or settlers, which can be counterproductive 20 years in prison under Israeli military law. Since the 60s has hundreds of thousands of Palestinians deprived of liberty. For parents in Palestine, it is not a question of whether their children should be arrested - but a question of when, says a representative of the local organization Military Court Watch during a meeting in Jerusalem.

Of course, having to serve a long sentence in an Israeli military prison affects the children's ability to complete their schooling. Not infrequently, they are denied study while in custody. Once the children are released, they have therefore lost a significant part of their school time and often suffer mentally but from the time in prison. Many times the return to school is fraught with difficulties. Children can suffer from insomnia, anxiety and difficulty concentrating.

During my time in the West Bank, I interviewed the Murrar family in the village of Budrus, who told me about their eldest son, who had been in Israeli military prison for a month. When he was released, there were only two days left until his final examination. Because he was not allowed to study while in custody, he did not pass the tests. His mother reportedly stated that he did not want to work or go back to school.

For us here in Sweden, it is a matter of course that our children can go to school without having to worry about being exposed to military violence. Palestinian children should also feel this basic security. The occupation of Palestine has been going on for 54 years. An occupying power is according to Geneva Convention obliged to facilitate so that school activities in the occupied territories can continue. They also have a responsibility to protect the occupied population from threats and attacks. Children's right to go to school is also established in The Convention on the Rights of the Child. Israel has signed both of these conventions and therefore has an obligation to ensure that Palestinian children can go to school in peace and security.