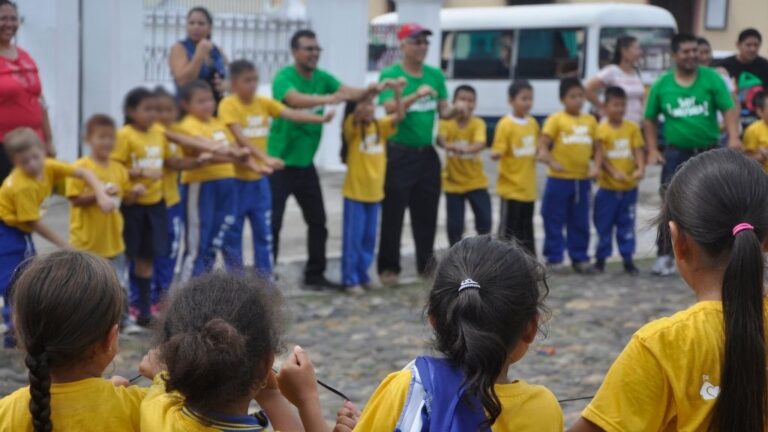 Achieving positive peace requires more than the absence of war and direct violence. According to leading researchers is the goal that society also achieves social, political and economic justice, as well as a respect for human rights. In the pursuit of positive peace, peace actors seek to help people recover from the direct and structural violence that has taken place, and change cultures to embrace peace. Research shows that Music can be a powerful tool for this. Music has been shown, in a way that the spoken word is incapable, to create emotional reactions in individuals that positively affect a collective. A fragmented and polarized society can move forward through joint music practice, and find new ways for a common future. This is the foundation on which the organization Musicians Without Borders works.

With a network of professional musicians, the organization collaborates with local musicians, teachers and organizations in places previously or currently affected by conflict, in order to promote long-term peace through music. In 2017, the project was launched, in collaboration with the UN Children's Fund Unicef ​​and the country's Ministry of Education "Soy Música!" (translated "I am music!") in El Salvador. Miguel Ortega, responsible for the project, says:

- Unicef ​​asked itself the question "what can we do in schools to change the environment?", And referred to the violence that is constantly present in the everyday lives of the country's children.

An invitation was sent to Musicians Without Borders, and since then the project has been underway. The project involves musicians from the organization for a year training local teachers and musicians in "Community music leadership", a program where emphasis is placed on music being for to the in society, and where teachers promote non-violence and conflict resolution in their teaching.

- It is permeated by the fact that everyone can make music as long as there is the will. In El Salvador, and in many parts of the world really, there is a norm that music is a product, says Miguel Ortega. Creating music without being confirmed "good" at it is stigmatized, and engaging in music is not seen as something serious an ordinary person can do. This is a barrier that the project is trying to overcome.

"They are local heroes ”

The children in El Salvador see the violence both on the street and at home, and it is not uncommon for children to drop out of school and join gangs. One wonders where they can escape, Miguel wonders.

- Security is the first step to being able to develop physically and emotionally. The project tries to create safe spaces where the children build relationships and trust in each other. They also build their creativity, their expression and their identity there.

During these music events, the children get to feel valuable and listened to, but the first step is to create change in teachers. Miguel paints a picture of how schools are often characterized by a hierarchical order and are very strict environments, even for teachers. Therefore, it is important that the change takes place with them first. He emphasizes that it is the teachers' work that has made the project a success:

- They are local heroes who get up every morning and work in this environment. The project creates a network of teachers and they are no longer alone, they work for a common goal.

The project is today in throughout the country and has several times attracted attention in the national media. Over 250 teachers and 16 children have participated and the future looks bright: this year the work enters a new phase where those who have already been trained in the country continue to train new teachers on their own, with some support from the organization. According to Miguel, the organization's work is always about strengthening local capacities and building on the global network of "musicians without borders".

"We have not solved the problem of violence"

At the same time, Miguel is clear that it is of course not always a sunshine story, and that various obstacles arise along the way.

- Not all children stand and sing and laugh together - we have seen both chaos and togetherness.

The organization also emphasizes that their work should not be interpreted as solving all problems, but rather as using the positive power of music together with the population. Director of the organization, Laura Hassler:

- We have not solved the problem of violence. We understand that systematic violence is complex and based on painful stories and their ongoing legacy. But we hope that Soy Música has brought a new positive, powerful tool to help build a culture of non-violence, creativity and context for the children who will be El Salvador's future.