In recent years, the reduction in budget allocations for Swedish research on global health issues is ominous, not least against the background of poverty diseases such as HIV / AIDS and Ebola. The new government now has the chance to take seriously the hitherto unfulfilled parliamentary promise from 2006 to contribute to the global fight against infectious diseases by further developing Swedish research. That is the opinion of Gunilla Källenius and Olle Stendahl

Sweden has a long tradition of development aid, with health aid as an obvious and priority part. Swedish researchers have successfully increased knowledge about diseases in poor countries, and developed tools to combat the infectious diseases of poverty. In recent years, however, funding for health research has decreased and young researchers are leaving the research area. This at a time when infectious diseases such as HIV / AIDS and most recently Ebola are drastically affecting vulnerable communities.

Most of the support for Swedish research on poverty diseases has been administered by Sida, and has taken place partly through a general annual call for Swedish researchers (Table 1), and partly through special initiatives. The largest individual investment was the support for research on HIV / AIDS, which was initiated in the 90s and which was of great importance in making Sweden a prominent research nation in the field. 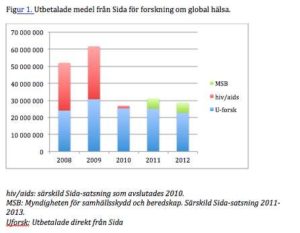 Sida also supports institutional research collaborations with low-income countries, in the form of bilateral support and individual establishment of collaborations with new partner countries, and provides support to international organizations in the form of multilateral support. Of the funds that Sweden allocates annually for research of relevance to the infectious diseases of poverty, the majority goes to the WHO, and to some extent INDEPTH and EDCTP. Only a fraction of the multi- and bilateral support goes to researchers at Swedish universities, either directly or through institutional collaboration.

Other support
Over the years, Swedish researchers have also received support for research on infectious diseases that affect poor countries through the Swedish Research Council (VR) and other research funds and foundations such as the Heart-Lung Foundation (which supports tuberculosis research) and the Foundation for Strategic Research.

How much money is involved?
Sida's general support for Swedish researchers between 2007 and 2010 amounted to an average of 30 million per year, and just over 20 researchers have been granted multi-year grants each year (Table 1). In 2008, support was sharply reduced when it chose to cut research funding due to the reduction in GDP in connection with the economic crisis.

The Foundation for Strategic Research has invested SEK 261,5 million in projects in infectious biology linked to global health during the period 2010-2014, where the projects will run until 2018-07-31. This concerns basic research that can only become important in practical reality in the longer term.

The support from Sida is transferred to the Swedish Research Council

In 2011, it was decided that Sida's grants for Swedish development research, including research on global health, would be administered by VR. Many thought it was good and desirable. The Swedish Research Council has good experience of evaluating and prioritizing research, and the best development research must be prioritized, in the same way as all other health research, and with the same strict criteria. At the same time, Sida was able to reduce its own administration, which at that time was important for Sida's own finances. 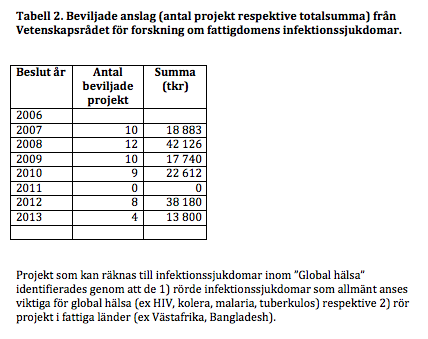 During a transitional period, 2011-2012, VR administered the grants for global health from Sida by distributing them to existing evaluation groups within VR (infection and health sciences), which in turn primarily “topped up” priority projects that were highly relevant to global health with money from Sida. 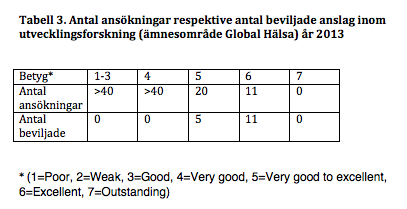 Although funding for individual researchers increased in size, these are still relatively small sums. In 2013, the researchers were granted an average of about 2.8 million, spread over three years, ie about SEK 900 per year and project. If one then takes into account that many researchers in the field have to withdraw their own salary through their own grants, one soon realizes the reason why younger researchers who do not yet have very large grants from other sources find it difficult to persevere in the long run.

Degree of approval
The approval rate for the applications for VR's call for global health is clearly lower than was the case previously when the applications were administered by Sida. In 2013, the approval rate was unacceptably low, approximately 13% (Table 3), compared with just over 20% for the period 2006-2010. All with grades 6 (“excellent”) and 18 of those with grades 5 (“very good to excellent”) were judged to have high relevance for the subject area global health. Sixteen of these 24 applications (57%) received funding (Table 3). This means that just over 40% of the applications with both high quality and relevance were not approved.

One reason for the declining grant rate is certainly that it has been shown that the given pot has been distributed to fewer researchers, as an effect of higher scientific requirements in combination with higher grants for researchers who have been awarded grants.

Another reason may be an increased interest in applying for funding for development research (see above). A further explanation could be that grants for basic research that were previously applied for from VR are now given the epithet "global health". More than half of the researchers who have had their applications approved have previously received grants from VR, several without a specific focus on diseases in poor countries. If it means a new interest among these researchers in issues concerning poor countries, it is gratifying and should be taken advantage of.

Turn the tide!
In summary, it can be said that the development of Swedish research on global health issues is ominous. The appropriations from Sida have decreased over time. In connection with the transfer of the management of research grants to the Swedish Research Council, the number of researchers who received support was more than halved.

This is particularly serious if we want growth in the research area. It has already been difficult for younger researchers to get support, despite a burning interest, at the same time as interest in global health is increasing. It is good that philanthropists like Bill and Melinda Gates and others support the research. But if Sweden does not do the same, there will be too few Swedish researchers who in the long run can compete for the large international grants. That they pay off shows the successful investment in HIV / AIDS.

In 2006, on Göran Person's initiative, a unanimous Riksdag decision was made to set aside just over half a billion each year for increased and new efforts for the global fight against infectious diseases. It was emphasized in particular that "support for research in Sweden with great importance for development in poor countries must be further developed", and that it was "important to maintain and develop a Swedish national research competence in the field". This never happened, despite several years assertions from Swedish researchers and aid workers.

It was a very far-sighted initiative. We need Swedish expertise for research and development in global health and not least in infection prevention and treatment. We need to be prepared with our own experience when new epidemics break out. Now the new government has the chance to take that investment seriously.