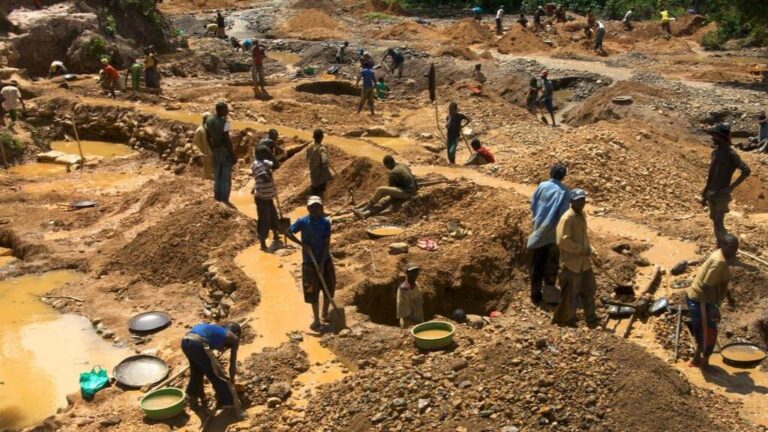 What do your mobile phone, refrigerator and computer have in common?
In addition to making your everyday life easier, they also support conflicts in different parts of the world. Namely, they are made up of metals and minerals whose extraction contributes to conflicts, which has therefore been called "conflict minerals".

Therese Sjöström, who is a researcher at Swedwatch, has visited mines in, among other places Congo, Zambia, Colombia and Myanmar. She told during FUF's seminar "Conflict minerals - is your technology part of the war in the Congo?" about the working conditions in the mines. And about how the metals and minerals contribute to conflicts. Sjöström said that the mining sector is one of the sectors that makes the biggest impression environment and which most violate human rights.

The same metal that makes mobile phones vibrate when we receive text messages, tungsten, acts as an engine for the conflicts in Congo. Six million people have been murdered in the country due to the extraction, and during a period as many as 48 women per hour were raped as a result of mining. The extraction of the conflict minerals has also led to millions of refugees being forced to flee Congo and nearby areas. Despite Congo's access to minerals - or perhaps precisely because of access to minerals - Congo is one of the world's poorest countries.

The minerals not only contribute to conflicts, there is also child labor. This happens, among other things, in the extraction of gold in the Philippines, where children can be forced to dive into water to find the mineral, sometimes at a depth of 25 meters. In other countries, some children in the mining sector need to spend hours in water containing mercury. Child labor involves health risks and means that children cannot go to school. Globally, child labor is becoming less common, but in the mining sector it is increasing.

The mining industry also violates human rights. Sjöström said that working conditions are reminiscent of modern slavery, where workers are beaten for theseeks to leave the mines. Some are tricked into the work. They are promised jobs, but when they arrive at the mine, they are told that they have a debt that they have to work from, and are thus forced to continue working.

Why then do we import minerals that we know contribute to conflicts? How can we import products when we know that there is a high risk that child labor, rape and threats to human rights have taken place? There has long been a discussion about the textile industry, with its working conditions that violate human rights and harm the environment, but this discussion is lacking for conflict minerals. Sjöström points out that the textile industry is now used to having to answer for the choices made, while industries such as the jewelery trade and technology companies do not even seem to know how the extraction of their metals and minerals takes place. How can it be allowed that companies are not responsible for knowing where their minerals come from?

Although conflict minerals are not highlighted in the global debate on human rights and conflicts, there are signs that the situation is beginning to receive attention. Dr. Denis Mukwege was awarded the Nobel Peace Prize last year, among other things for examining the link between mining and sexual violence in the Congo. Conflict minerals have also begun to receive attention in politics. The government has appointed one investigation with the aim of helping Swedish importers to avoid the minerals that lead to conflicts. This will make it easier for Swedish companies to absorb EU Conflict Minerals Regulation which enters into force in 2021. The Regulation focuses on four different conflict minerals, and requires EU companies to ensure that these minerals - if used - do not affect conflicts.

People in the mining sector are forced to make great sacrifices, but Sjöström reminds us that there is much we can do to improve the situation at the consumer level. We can make sure to recycle all metals and use the website Ethical Consumer which ranks companies based on how well they respect human rights and the environment. We can also look for the TCO certification that works as a sustainability certification for IT products. In stores, we can ask questions to those who sell the products. There is hope that the policy measures can change the trade in conflict minerals, but there is also much we can do at the consumer level to improve the situation.