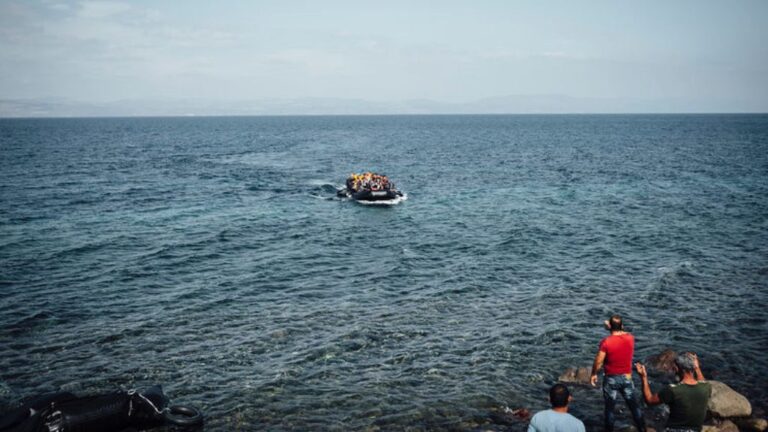 From January to September 2022, the number of people who left Lebanon for Europe has increased by 70 percent compared to the same period last year. Pictured: Rubber boat arrives at the Greek island of Lesbos. Photo: Penelope Schulman. Source: Flickr.

Widespread poverty, lack of sanitation and substandard health care are some examples of the deteriorating situation in Lebanon. More and more people want to leave the country, and last September at least 94 people died when a boat with refugees crashed in the Mediterranean.

The boat, which left Lebanon on September 21 and then sank off the Syrian coast the same night, had up to 150 people on board. At least 94 of them drowned, of which several children and the elderly. The boat accident is one of the deadliest in the eastern Mediterranean in recent times, according to DN.

The 35-year-old Lebanese Mustafa Masto and his three children were some of the victims of the boating accident. His wife, who had previously fled the war in Syria, was seriously injured. The family had hoped to reach Italy for a brighter future there. Shortly after the boat accident, Mustafa Masto's mother Adla expressed her sadness and disappointment towards the Lebanese government in an interview with BBC.

- The accident is another heartbreaking tragedy, he said.

The reason behind the boat accident was not clear at the end of September, according to the report with the BBC. About twenty people were rescued from the water and taken shortly afterwards to the Syrian city of Tartus to receive medical care. The remaining people had, on September 24, still not been found. Shortly after the accident Lebanon's military said that they had arrested a man they believed was behind the suspected smuggling.

A country in economic crisis

Lebanon's national financial crisis worsened after the explosion in Beirut's port area in 2020. The Corona pandemic has also meant that the country is now facing enormous challenges. The country risks becoming state bankrupt, and is estimated to have among the highest the debts in the world. The the financial difficulties in the country has led to widespread hunger and poverty which now pervades everyday life for many of the country's inhabitants.

According to UNCHR Lebanon is the country in the world that has received the most refugees per capita. And as more and more people want to leave the country, the number of migrant-filled boats leaving the Lebanese coast and human smuggling from the country has also increased. In September, the number of people who left Lebanon for Europe during the year had increased by 70 percent compared to the same period last year.

- No one steps on these death boats lightly. People make this risky decision, risking their lives in a pursuit of dignity, says Philippe Lazzarini, head of the United Nations Refugee Agency for Palestine (UNRWA).

Amanda Rossling is studying the Europe program at the University of Gothenburg and is voluntarily active in FUF's editorial board during the fall of 2022.