On March 25, a short but quite intense rainfall caused tragic flash floods in the southern Iranian city of Shiraz. This was only a week after widespread record-breaking rainfall caused flooding in northern regions. This incident alone killed 21 people and washed away over 150 cars at the entrance highway to the city. In early April, floods resumed more intense than before and damaged various contemporary and historic structures. Roads blocked by landslides made sending relief to the flood-hit places very difficult. Floods continued towards Khuzestan, and while they resulted in fewer human casualties as the area was evacuated in time, they still caused serious damage to villages and the agricultural sector.

These extreme events can be related to climate change. But there are other factors that could worsen the damage, including poor soil and vegetation conservation, settlements along riversides and floodplains, a lack of efficient forecasting methods and alarm systems, design problems due to limited funds and insufficient data or knowledge of the local hydrological variations . Iran is rich in historic water structures and conducting research on them can help to learn something about the variations in the past.

At the same time, the extreme events had some benefits. For example, they helped to revive Lake Urmia in Azerbaijan and the Hoor-al-Azim wetland in Khuzestan after years of drying up. Developing alternative solutions (eg artificial groundwater recharge) and the foresight operation of reservoirs could lead to even more benefits. But the focus was typically on water storage in spring to compensate for summer deficits. As a result, the reservoirs were almost full and could not hold any additional water.

Despite recent events, the water crisis in Iran is usually associated with water shortages. The overuse of freshwater due to rapid population growth combined with frequent droughts over the last few decades has led to unsustainable water management schemes. The uneven distribution of rainfall, both spatially and temporally, is another fundamental problem in Iran that has led to huge investments in water transfers between basins. In addition, 90 percent of the water extracted in Iran is used for agriculture with rather low water efficiency. “A fix that backfires” is the process that happens for most of the water transfer and irrigation upgrading projects. The added water is usually used to expand farms or grow crops for higher profits, instead of increasing efficiency or recovering vulnerable environments.

Food security has always been a priority for the country and the government is reluctant to change the agricultural water share just for the sake of the environment. Recent floods have shown that instead of building new control structures that are likely to worsen the current state of the environment, it is possible to provide more water for the environment in order to maintain higher control capacity in the reservoirs.

Hasan is a visiting researcher at Lund University and a PhD candidate in Water Resources Engineering at Tabriz University. His research focuses on adaptive water management under uncertainty of predictions, remote sensing of rainfall, and extreme hydrology. 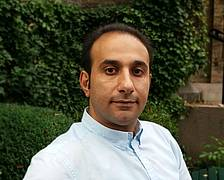