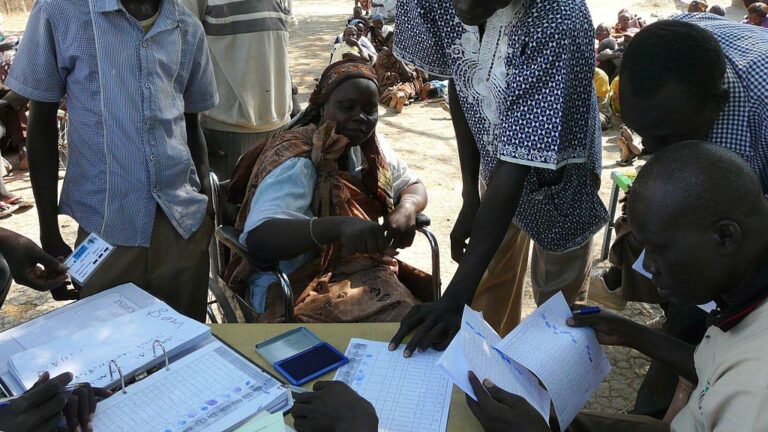 Local actors work, among other things, with data collection. This leads to a better estimate of how many people live with some form of disability. Photo: Oxfam East Africa / Flickr

On Monday morning during Almedalen Week 2019, I am on my way to a seminar that will be about the global goals and how we can create an inclusive future for people with disabilities. I try to locate myself up to the place where the seminar will take place at the same time as I think about what it would be like to live with a disability myself. What had my conditions and opportunities for an independent life looked like? Had I received the help I needed? I arrive at the site and sit down in a large room with other committed people and eagerly wait for the seminar to begin.

During the seminar, we in the audience discuss among ourselves that people who live with some form of disability are among the most vulnerable and marginalized people in the world. The WHO and the World Bank estimate that over one billion people live with some form of disability in the world and most of them live in low- and middle-income countries, where they are often denied the opportunity to live independently.

Cornilla von Plomgren, who is head of the Swedish operations within the organization Sightsavers, which fights against blindness and for equal rights for people with disabilities, is participating in the seminar. She believes that the absolute key to helping people with disabilities in low- and middle-income countries is to cooperate with local organizations. Local actors work, among other things, with data collection. This leads to a better estimate of how many people live with some form of disability and they know better how the collaboration should be designed in the best possible way. It is thus through these organizations that one can reach out to the most marginalized people. In addition, cooperation with governments, companies and universities in partner countries is an important part of development cooperation, she says.

- Cooperation is the core of effective partnerships that create change for people with disabilities in low- and middle-income countries, she says.

An example of a local organization that has developed its business through partnerships is Cheshire Ethiopia (CE) in Ethiopia. While volunteering at Cheshire Ethiopia, I witnessed the necessary work done by local organizations. CE is an independent non-governmental organization that works locally to provide physical rehabilitation to people, mainly children, with various disabilities. Their vision is for people with disabilities to be included in society. They also want to be an institution that offers first-class rehabilitation in Ethiopia.

One program that CE is working on is ¨The Donkey Assisted Therapy (DAT) project¨, which is a project that focuses on animal-assisted therapy. In Ethiopia, people with disabilities are equated with donkeys, as both donkeys and people with disabilities are considered to be at the bottom of society. But CE also sees donkeys as an important asset. The children who participate in DAT are given the opportunity to interact with donkeys, which has led to the children improving their motor and social skills and increasing their verbal communication.

Because it is stigmatizing to have a disability in Ethiopia, it can result in children becoming depressed, but the DAT donkey program helps many children recover from depression. The program creates a sense of inclusion, increases children's self-esteem and reduces feelings of isolation, loneliness and anxiety by giving them a companion.

Need to prioritize people with disabilities

Cornilla von Plomgren at Sightsavers is convinced that people with disabilities will be able to have more rights in the world. This is in light of the fact that governments have given priority to people with disabilities in their development cooperation and that companies have contributed funding and knowledge. Goals number 4, 8, 10, 11 and 17 are some of the goals that specifically address people with disabilities and these are higher on the agenda than before. And if aid actors work with local organizations, we have a better chance of achieving the global goals by 2030.

Cornilla von Plomgren concludes our conversation by saying that the British government has chosen to prioritize the work of people with disabilities within the framework of their international development cooperation and humanitarian aid. Now she thinks it is time for Sweden to prioritize it in its international development work and humanitarian aid.