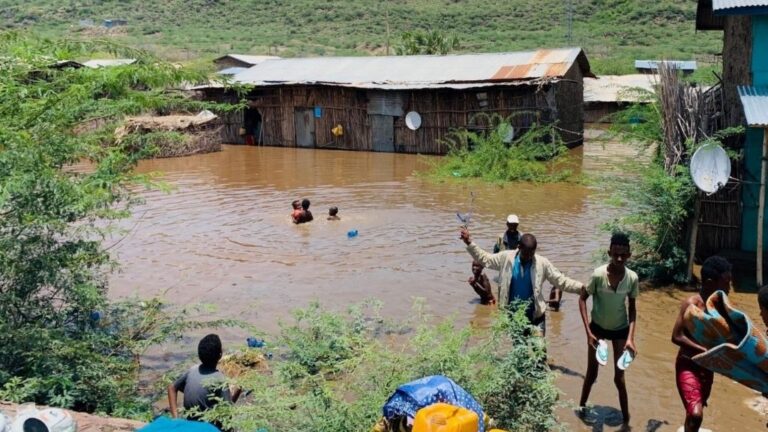 In recent months, Ethiopia has been hit by severe floods that have led to an acute humanitarian crisis. Together with local actors, an aid effort is underway to provide people with food and clean water.

In addition to the corona pandemic, there are several acute humanitarian disasters in the world. In Ethiopia, more than one million people have been affected by severe floods since June 2020. Ethiopia's main rainy season has been extended this year and has been more intense than before. The floods intensified in September. In the worst affected region, Afar, located in the northern part of the country, around 140 people have had their homes destroyed as a result of the rain. They now live as internally displaced persons and have difficulty accessing both food and clean water.

The aid organization PMU has for ten years worked on development projects in the Afar region together with the local partner EMWACDC, which is an aid organization affiliated with one of the country's evangelical churches. Through Sida's so - called Rapid Response Mechanism, the PMU, together with the EMWACDC, has now begun an urgent humanitarian response to families and people in need after the floods.

The local partners play a very important role in the work. EMWACDC's many years of work in the region create trust in the local community and among local leaders, which is an important part of the work when providing support to vulnerable people in a disaster situation.

The challenges in Ethiopia are many, but local actors, including the EMWACDC, often have a very good ability to work in hard-to-reach areas, to act in complex security situations and to manage local power structures.

Many families in the Afar region are particularly vulnerable because even before the disaster they had poor access to clean water, health care and good infrastructure, according to EMWACDC. Families have lost their homes, possessions and livestock. The floods have washed away crops and crops. According to an assessment report issued by the UN and several NGOs in Ethiopia, 50-60 percent of all households in the Afar region that are dependent on crops for their income in the coming months, will suffer from food shortages and malnutrition.

Children and women who are at high risk of being exposed to violence and insecurity in connection with the crisis are particularly vulnerable. Therefore, targeted efforts are made to precisely these target groups. In Ethiopia, it is often mainly women who make sure that the family has food on the table. Many women are now under both physical and mental pressure after the disaster. Through EMWACDC, PMU will contribute with food support, nutritional support for children, pregnant and breastfeeding women and distribute other necessities such as mattresses, sheets and blankets.

Great focus in the overall disaster response in Ethiopia is on providing people with food and clean water. But the project will also include opportunities for community representatives to gather for training in how they can better withstand future potential disasters and extreme weather.

In 2020, the development aid world has had to adjust in relation to the corona pandemic. Local actors, through their proximity to affected local communities, have of necessity quickly adapted and learned how to act in relation to health authorities, local leaders and the population. The local player EMWACDC has worked with Covid-19-adapted emergency response for vulnerable groups even before the flood disaster. The same is true of many of PMU's partners around the world. They are on site, know their context and can therefore quickly switch from development projects to working humanitarianly - even in the midst of a corona pandemic.

With the rights perspective as glasses, we also see that the issue of the role of local actors in humanitarian work is ultimately about human dignity. Girls, women, boys and men who have survived a disaster must also be at the center of their own response. In order to be able to involve the victims in humanitarian efforts, the support needs to be directed through local actors. Those on site before, during and after a humanitarian disaster must be given a chance to lead the operation.

Erik Svanberg is a humanitarian project manager at PMU.