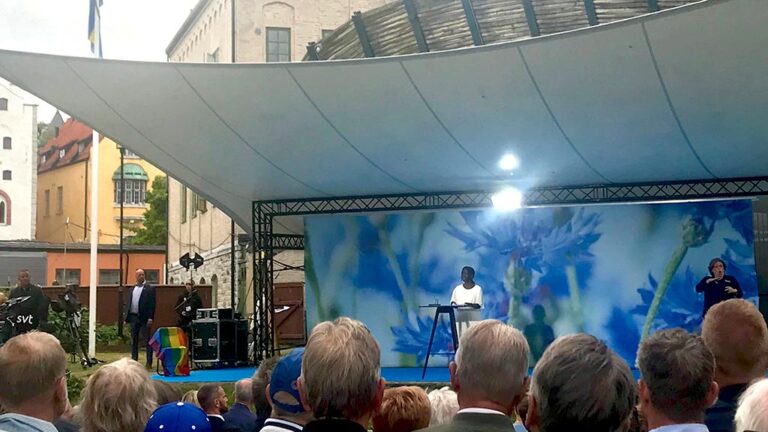 - Climate anxiety is only good if it leads to climate measures, Sabuni comments.

The new L-leader believes that concrete political action is needed for future anxiety to lead to faith in the future. The Liberals must deliver what is required for the climate goals to be achieved, she says.

Nyamko Sabuni mentions investments in electrification of truck traffic to reduce emissions. And that she wants to appoint an electrification commission that will drive the work with profitable electric roads for heavy traffic in Sweden. In addition, Sabuni avoids mentioning the Liberals' position on current climate policy issues. Instead, Sabuni praises engineers and their ability to deliver new and innovative green technology, which is applauded by the audience. According to Sabuni, the Liberals should be the green political force.

In the speech, Nyamko Sabuni also talks about integration, but nothing about L's attitude to migration or the refugee issue is mentioned. Her personal experience as a refugee becomes a positive story about when integration works, she says.

- I think that we who come from other countries sometimes feel the love for Sweden even stronger. Because we have experienced the alternatives and we have chosen this country.

Sabuni believes that she believes in people's ability to live in the reality of others and that diversity enriches. We must not let xenophobic forces kidnap our community, Sweden's flag or concepts such as Sweden's friend, she says.

- Succeeding in integration is the great social liberal challenge of our time, says Sabuni.