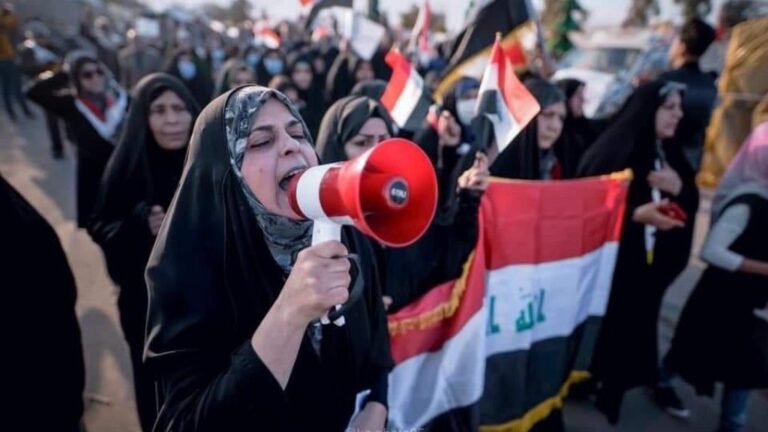 20 years ago, the pioneering resolution 1325 on women, peace and security was adopted by the UN Security Council. The resolution has led to some progress for the women of the world, but more work is needed to increase women's opportunities to participate and gain real influence in more ways in society.

Reports from conflicts in the 90s showed how women were systematically affected by war. In the Balkans, mass rapes were used as weapons of war and were also the reason why Kvinna till Kvinnas was founded.

After women's organizations around the world worked with intensive advocacy work, the revolutionary Resolution 1325 in 2000 was adopted by a unanimous Security Council. It was the first resolution that stated that women's participation and decision - making in peace processes and conflict prevention work is crucial to achieving sustainable peace. It emphasizes the role of women as actors for peace, and the importance of a gender perspective on peace and conflict work. Resolution 1325 also draws attention to the fact that women are disproportionately affected by conflicts and the importance of protecting women and girls in conflict situations. Today, 1325 is part of a larger package of ten Security Council resolutions, which together are usually called Women, Peace and the Security Agenda.

Twenty years later, it is clear that 1325 has led to some progress, but not enough. A positive result is that systematic abuses of women in war no longer pass under the radar. The proportion of peace agreements focusing on gender equality has also increased from 14 to 22 percent during the period 1995 - 2019. But the proportion of women in the UN military forces has only increased marginally, from three to five percent, and women are still excluded from peace negotiations and peace agreements. Between 1992 and 2011, less than four percent of signatories were women.

Resolution 1325 contains three pillars: participation, protection and prevention. One problem is that the protective part has been given a very large space. It is important to remember that women are victims of war in specific ways precisely because they are women, but unfortunately this focus has also meant that women have continued to be portrayed primarily as victims and not actors.

1325 has nevertheless been an important tool for women peace builders. In Kvinna till Kvinnas rapport "A Right, not a Gift"91 women's rights defenders testify about how they have benefited from 1325. They have been able to use the resolution widely to increase knowledge about women's rights, argue for peace and counteract harmful gender norms. With a UN resolution behind them, they have also been able to push for legislation and policies on women's participation and rights in their countries.

Resolutions adopted by the Security Council are binding on all UN member states, but the UN has little opportunity to take action against countries that ignore this. Interest from UN member states for the important 1325 has been somewhat cool. In order for the resolution to be a workshop in a country, a national action plan is required. After 20 years, still only 44% of UN member states have developed such action plans, and only 24% have allocated a budget to implement the Women, Peace and Security Agenda. Without money, there are few opportunities to move forward.

In the countries where the resolution has had the greatest impact and made a difference, it has not happened mainly because a government has taken it seriously and made reforms, but because the country's women's movement has been able to use 1325 as a tool and argument to hold its leaders accountable. and demand a place in the work of peace. This does not happen overnight but is often unfortunately a very slow process. Here, Colombia is an example, where the women's and peace movement merged in Women for Peace. Their negotiations and peace work were then able to incorporate concrete proposals and recommendations into the formal peace negotiations and a peace agreement was finally signed at the end of 2016.

One of the parts of the agenda where it has been most difficult to make progress is precisely women's participation in peace negotiations. It is a waste not to use all competent women who have endless experience of how peace is best built in their countries and societies. This "waste" is a result of discrimination, patriarchal structures and an unwillingness to change. Therefore, the feminist perspective is necessary to achieve better results in the future.

It becomes clear that Women, Peace and Security Agenda and Resolution 1325 must in the future cover more areas that affect women's opportunities to participate and gain real influence. This applies above all to women's economic rights, but also to the fact that women's civil society and local women's rights organizations must receive more support, both politically and financially.

Women today have too little power and influence over economic decisions. This concerns, for example, the right to land and property. In several countries, there is discriminatory legislation that prevents women from inheriting and from owning, for example, real estate. Empowering women financially is also about education and being able to enter the labor market.

In many countries, civil society is women's only chance for influence as they are ported from official positions of power. Donors must become better at giving civil society in these countries proper funding in order to increase women's power and participation.

We also know that women's rights organizations are often particularly vulnerable in societies with shrinking democratic space. Here it is now even more difficult for activists to fight for women's rights, democracy and to work for peace and their voices risk becoming silent without strong support.

In the rearview mirror, 1325 has nevertheless been completely revolutionary, even though the Women's Peace and Security Agenda has not reached the end. Now it remains for the UN, other international actors and the women's rights movement to increase their ambitions in the coming decades.