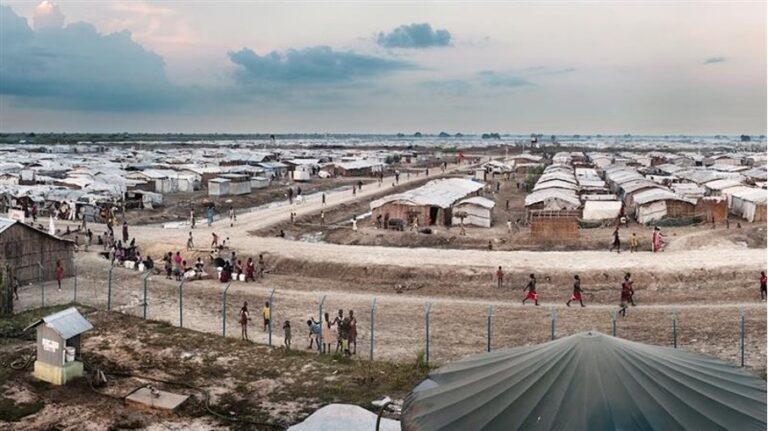 Caroline De Groot, employed by Médecins Sans Frontières (MSF), has spent eight months in South Sudan's largest refugee camp in Bentiu. There, she has worked as HR and finance manager for over 500 MSF employees on site at the camp.

120,000 people live today in the camp where MSF operates with its largest effort in the country. Together with several other aid organizations such as Unicef ​​and the Red Cross, they assist people in the camp.

- In comparison with other hospitals in the country, MSF's hospitals in Bentiu have resources to perform advanced medical care such as surgery. It happens that people travel for several days or weeks to get to the hospital, says Caroline De Groot.

Following the independence of Sudan in 2011, armed conflicts broke out in 2013, mainly between President Salva Kiir's party SPLM / A and the opposition SPLM / A-IO. The civil war took a heavy toll on the country's economy and resulted in 400,000 civilian casualties, Sida's analysis shows. In 2018, a peace agreement was signed again between the warring parties, but internal conflicts have continued.

At the same time, South Sudan is one of the world's worst affected countries in terms of climate change. According to the UN has The number of people affected by seasonal floods in East Africa has increased fivefold in the last four years. So far this year, 800,000 South Sudanese have been affected. Harvests and most villages have been destroyed.

Poor infrastructure in the country

Caroline De Groot has seen the consequences of war and natural disasters up close. Bentiu, like many other cities, was destroyed during the 2013 Civil War.

- People's houses were burned down during the war. In what is left of Bentiu, you see gunshot wounds in the facades. Now a large part of Bentius' population lives in the refugee camp where 10 to 15 people can share a small plastic shed.

In connection with last year's floods MSF sent out an emergency team to help the vulnerable rural population. MSF employees had to walk on foot to be able to help people in villages with medical care, water and sanitation.

- The floods affect people extremely. They also make MSF's work more difficult. The infrastructure is almost non-existent in the country and we need to transport everything by air. During the dry season, we tried to transport material by truck, but it took weeks for it to arrive, says Caroline.

A country dependent on aid organizations

Through her work at Bentiu, Caroline saw how important the presence of humanitarian organizations is for the people of South Sudan, both in terms of emergency care and support:

- MSF is the largest employer in Bentiu, says Caroline. The whole country is dependent on NGOs. It became especially clear when the country's borders were closed for a few weeks due to the Corona pandemic and medical supplies became a scarce commodity.

South Sudan is today dependent on humanitarian aid and there are major challenges in being able to become self-sufficient. Caroline is one of those who believe in the power of education.

- With education and schools, children can gain knowledge and thus get a chance at another life. But wars and conflicts must also end. But climate change, which is already being felt in South Sudan, will be difficult to stop, she says.

Médecins Sans Frontières (MSF) (French: Médecins sans frontières (MSF)) is an international medical and humanitarian non-profit organization that is politically and religiously independent. Médecins Sans Frontières assists people affected by crises, wars and natural disasters, regardless of political opinion, religion or ethnicity. The organization was founded in 197 by a small group of French doctors. The office in Sweden opened in 1993.