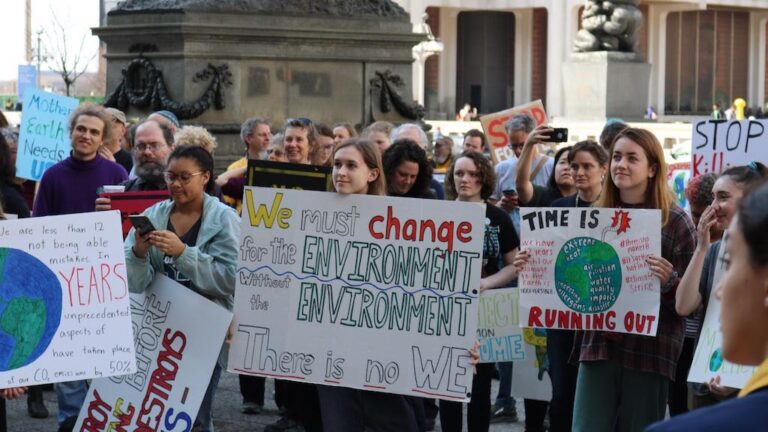 Greta Thunberg and her commitment to the climate have caused waves around the world. Maybe we're close to a social global tipping point. Photo: Olivia Colacicco, Unsplash.

Every second Swede experiences climate anxiety, DN states after a new opinion poll. At the organization Existential Vis, the therapist and researcher Maria Niemi works with inner sustainability. This addresses the increased need for emotional support that follows the climate crisis.

- I can see an increasing trend of people seeking help for the climate crisis as a concrete problem. But often people who tend to feel anxious about climate change are also inclined to feel anxious about other areas of life - the anxiety is thus linked to their own life. The treatment is therefore rarely only of climate anxiety but also of other areas of life and existential issues such as how we handle change and transience, says Maria Niemi.

The therapist and researcher Maria Niemi, together with the psychologist Minna Forsell, have built up the organization Existential Vis where they work with social sustainability issues from a combined societal and individual perspective. Here, courses, lectures and psychotherapy are offered to delve into how you as an individual can protect yourself and your mind to in the long run promote sustainable behavior at the societal level.

- So far, we work primarily at the individual level with psychotherapy to help people who experience climate anxiety. The plan is to develop a course on individual and societal sustainability where more people can participate and gather around the subject, says Niemi.

Climate anxiety goes hand in hand with the need to act, but it can be difficult to know what you as an individual can do. Sometimes Maria Niemi gets questions from her clients about how to live more climate-friendly.

- We have a very broad knowledge of concrete tools in this issue. Sometimes people ask me for advice, but we do not tailor how people should act. When working therapeutically, the focus is mainly on the individual finding their own ways that feel meaningful, says Niemi.

When the Language Council presented the New Earth list in 2018, the word "flying shame" was on the list. The concept is debated and many argue that indebtedness does not cause a change in behavior. At the same time, Swedish Radio states that every fourth Swede this year has opted out of aviation to reduce climate impact. The word shame related to the climate issue is not isolated to aviation but is also seen in concepts as plastic shame. It seems to express a trend.

- What some research shows about behavioral changes regarding climate-friendly behaviors is that we are most likely to make changes if we believe that our neighbors do the same, says Maria Niemi.

Niemi points out that humans are social beings and that it therefore matters what we think others think of us and what we do.

- I do not think that shame is the biggest driving factor, but that it is the feeling of being part of a movement and a context. Then one's own actions become part of a larger whole and thus more meaningful.

Niemi believes that her practice, and also research on the subject, shows that the feeling of anxiety and hopelessness alone does not lead to a change in behavior towards a more climate-friendly life.

- But together with the feeling of meaning, anxiety can be a driving force that creates activity and change. When we experience a threat that we feel we must do something about, then the fear arises. If we can deal with fear in a fruitful way without it overshadowing us, it is a good basis for action, Niemi states.

The now world-famous Greta Thunberg and her commitment to the climate are causing waves around the world. Regardless of whether it is shame that drives change, environmental scientist Johan Rockström in SVD speculates whether we are close to a social, global tipping point.

- Social psychological research on the concept of "tipping point" shows that greater change can begin to occur when about 10 percent of a population is involved, says Niemi and points to historical examples such as the abolition of slavery in the United States where small popular movements gradually led to major societal changes.

- Reaching the first 10 percent, it can be a slow process. What then characterizes a tipping point is that it then goes very fast to reach the rest, she continues.

Niemi believes that there are many factors that must interact for people to be mature enough to listen to Greta Thunberg, for example. The problem is that we humans are quite poorly psychologically equipped to respond to abstract threats such as climate change.

- We probably unfortunately need to experience concrete climate disasters before we reach a so-called tipping point where people actually start making behavioral changes. The hot summer of 2018 was possibly such a concrete experience for many.

In the debate on aviation shame and climate anxiety, there are divided opinions about the concept's function and relevance. Maria Niemi works closely with people who have sought help for these feelings.

- All emotions, positive or negative, are driving forces. But if we as individuals should be ashamed? No. The climate crisis is not something we have deliberately created. The changes have come from a production and consumption system that has been developed for a long time. Living in an environmentally friendly way in that society is a challenge and shameing each other often does not lead to change, but rather to conflict that counteracts the purpose. But it is clear that shame as such has a function when we interact socially. If others around us start acting more climate-friendly, we would like to do the same. In this way, shame can lead to action.