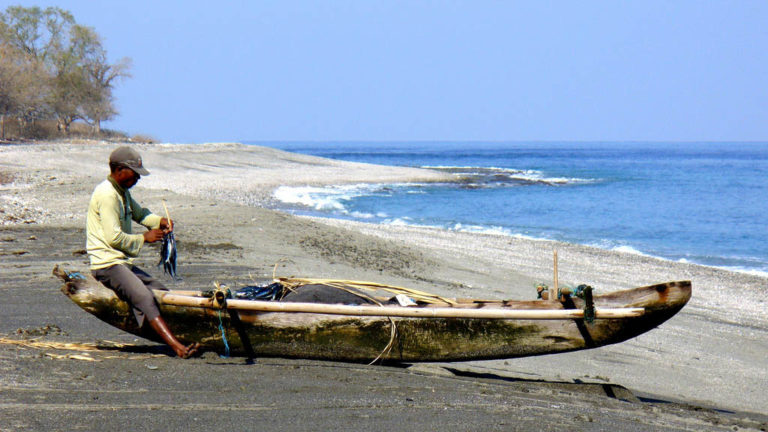 Access to water and sanitation has been an important issue in the conflict in East Timor. Photo: Yeowatzup, Flickr.

Although climate and environmental issues are often central to conflicts, they are often forgotten in peace processes. Examples from Colombia, East Timor and Iraq show that land, water and climate change are crucial issues for achieving lasting peace, write Karolina Eklöw and Florian Krampe from the research institute Sipri.

The challenge in peacebuilding is not only to prevent violence and stop the resumption of conflicts, but also to support societies to restore their internal relations. The year 2017 was conducted in total 63 active peace operations around the world, 13 of which were peacekeeping missions under the UN flag. Many of these have been going on for decades. Others for more than half a century, such as in Israel and Palestine or in the conflict-ridden mountain region of Kashmir on the border between India and Pakistan.

In order to create lasting peace, everything from social circumstances to political challenges and ecosystems should be balanced. In the aftermath of the war, the state's capacity to manage these affairs is often limited.

In the short term, it may seem too complicated to include all different aspects in peacebuilding, therefore environmental issues are often given lower priority in favor of what is perceived as more urgent issues. But increased research and political experience show that in the long run it can be profitable to integrate environmental aspects at the beginning of peacebuilding.

Land issues central paradox in the conflict in Colombia

The case of Colombia illustrates how competing interests increase the complexity of peace processes. Half a century ago, it was precisely protests against the privatization of land and socio-economic injustices that gave rise to the conflict. It is no coincidence that the first chapter of the Colombian peace agreement concerns issues of land use and rural reform. The management of natural resources was part of the problem, which makes it an important part of the solution.

Today, two years after the end of the longest lasting conflict in the Western Hemisphere, Colombia is facing a path where the environment is back in focus. For half a century, massive land territories were ruled by Colombia's revolutionary armed forces (FARC). Nature was inadvertently protected from exploitation as areas were not safe enough for the forest and mining industries. Today, these land masses are again exposed and actors make pilgrimages to previously inaccessible areas. Today, there is no doubt that deforestation has increased dramatically since the peace agreement.

Paradoxically, the environment is thus a seemingly symbolic chapter in the peace agreement rather than an implemented reality. It is no small matter that natural resources were once at the heart of the Colombian conflict.

While questions about land are often brought to attention, fewer people are aware that peacekeeping missions are often directly involved in water management. New research in Kosovo and Timor shows that many peace missions actually have special units that deal with water supply.

In East Timor, the existing water infrastructure was previously poorly maintained. It was even a strategic target during the Indonesian occupation (1975-1999). Lack of access to sanitation reinforced vulnerability and human suffering even after the end of the conflict.

The UN Transitional Administration in East Timor, UNTAET, faced many challenges in rebuilding the water sector. There was no inclusion of women in local water committees, which is remarkable given that UNTAET had a unit for gender equality issues. The Asian Development Bank has found that on occasions when women's involvement has been high, water has been made available within a closer distance from home. This in turn reduces vulnerability and has paved the way for human security and development.

Climate change is making it harder for peace in Iraq

If the management of natural resources in peacebuilding is complicated, then add how climate change is hampering these efforts. Examples of difficulties can be clearly seen in countries such as Afghanistan and Iraq.

After several wars, international sanctions and decades of authoritarian rule, Iraq is still plagued by poverty and severe trauma. As if the challenges were not big enough as they are, climate change further complicates the whole thing.

A new rapport from the expert group for climate-related security risks - which is funded by the Swedish Ministry of Foreign Affairs - shows that climate-related security risks in Iraq have increased in recent years. The report shows, among other things, that reduced opportunities for agricultural supply tend to increase local support for terrorist groups. Agriculture is the most common source of income in Iraq. But, while the oil industry is saturated with massive financial resources, among the smallest appropriations from the national budget is allocated to the Ministry of Agriculture.

Following the US-led invasion of Iraq in 2003 - and the subsequent attempts at peacekeeping - efforts have failed to restore sectors that could increase resilience to climate change. Climate change and lack of resource management make it difficult for millions of farmers to support themselves. Vulnerability gives groups such as IS incentives to look for recruits among the vulnerable.

Climate and environment are a key to stability

These examples from Colombia, East Timor and Iraq show that peace-building is seldom, if ever, unequivocal. International peacekeeping operations underwent significant changes after the Second World War, and the issue of revitalizing international peacekeeping operations is highly topical. However, the management of natural resources is a critical challenge that is often overlooked - a fact that risks becoming even more complicated due to the increasing impact of climate change.

Plans to maintain peace can no longer exclude the management of the environment and natural resources. They should also have the ambition to strengthen societies' resilience to climate change. It is necessary to recognize that strengthening climate and environmental issues and caring for ecosystems itself is a way to prevent conflict. With the right support, it can even be a golden opportunity to build a lasting peace - socially, economically and politically.

On October 25, FUF and Mänsklig Säkerhet organize a seminar on the same theme.