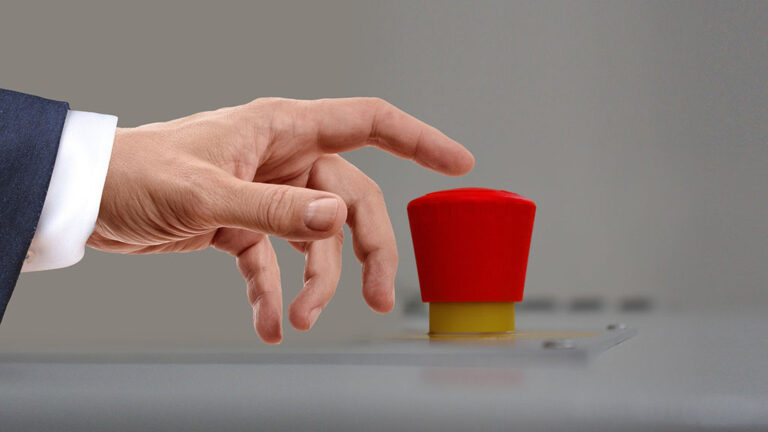 Every new shutter button installed in a presidential palace anywhere in the world increases the risk of a humane and ecological disaster, the debater writes.

More and more countries are currently preparing for nuclear war. A nuclear war would be a threat to all life on our planet and would pale in comparison to the damaging effects of climate change. Sweden must take a leading role in disarmament and sign the UN Convention against Nuclear Weapons, writes Martin Pudaric from S-students.

In terms of global sustainable security, there are few threats that are as acute as the imminent threat of nuclear war, yet it is something we are talking less and less about. During the Cold War, both children and adults were drilled into what happened in the event of a nuclear war. Brochures were sent out regularly to the country's households and shelters became an increasingly common sight in our residential buildings and other public spaces.

In connection with the end of the Cold War, the rhetoric underwent a revolutionary change. The threat of nuclear war was no longer imminent and other security policy dilemmas became more prominent on the agenda, not least after 2001 when the war on terrorism became the new leading security policy doctrine.

The break-up of the Soviet Union and the status of the United States as the sole superpower would guarantee a secure world in terms of nuclear weapons. The good United States would ensure the maintenance of non-proliferation agreements as well as work for global nuclear disarmament, and the threat of nuclear war was judged to be more or less over. The proliferation of nuclear technology in recent years combined with the deteriorating security situation in the world - and add to that the US election of Donald Trump as president - shows that nothing could be more wrong.

Easy to be fooled by the numbers

The world's nuclear arsenal is still dominated by two countries, the United States and Russia. According to the research institute SIPRI There are currently a total of 13 nuclear warheads in the world, of which just over 865 are found in the United States and Russia. This is a decrease of about 13 nuclear warheads since 000 and the development may thus seem to be going in the right direction, but it is easy to be fooled by numbers.

Both Russia and the United States are getting rid of outdated, outdated warheads in favor of modern nuclear weapons with higher precision and longer range. The total arsenal may thus decrease, but this does not necessarily mean that the explosive power and the potential devastation decrease. Donald Trump's decision to unilaterally withdraw from the historic disarmament agreement INF, which was concluded between the United States and the Soviet Union in 1987, is another source of concern for anyone who cares about global security. This may well lead to a reversal of the trend and an increase in the number of nuclear warheads in the world.

In the discussion on nuclear disarmament, however, it is easy to get caught up in the United States and Russia as the countries possess a large part of the world's total nuclear arsenal. This is understandable but dangerous in that the more than 900 warheads that the other countries possess are fully sufficient to cause a destruction that would make the damaging effects of the impending climate change pale in comparison.

Next to the United States and Russia, France (300) has the most warheads, followed by China (290) and Great Britain (200). Other nuclear weapons countries consist of Pakistan (150-160), India (140-150), Israel (80-90), and the newcomer to the North Korea gang (20-30). As a direct consequence of US foreign policy under Donald Trump, two more countries will soon join the crowd, as both Iran and Saudi Arabia are judged to be well on their way to acquiring their own nuclear weapons.

The image of an ongoing disarmament is thus dangerous because it gives the impression that the risk of nuclear war in the world is decreasing, while the truth is the opposite. The truth is that this fateful technology is instead spreading to more and more despots and war regimes, and for every new shutter button installed in a presidential palace anywhere in the world, the risk of a human and ecological catastrophe increases on an unprecedented scale.

Risk to all life on the planet

It is therefore high time that the issue of real nuclear disarmament once again takes place at the top of the international security policy agenda, alongside climate change and other crucial challenges that humans will face in the coming decades. It does not really matter if you are a 15-year-old with a burning climate commitment, a 38-year-old animal rights activist who spends the summers breaking into mink farms or a 48-year-old official who still has the youthful dream of becoming rich through self-employment - the issue of nuclear disarmament concerns you to the highest degree no matter who you are.

Sweden must take a leading role

One of the great fateful issues of our time is far from resolved, and it is high time that people on all parts of the political spectrum organize for Sweden to once again take a leading role in the work for global nuclear disarmament.

A first step is for Sweden to sign the UN Convention against Nuclear Weapons, which the government, as a result of American pressure, has so far refused to sign. In a larger perspective, it is important that Sweden dares to take a clear position against nuclear weapons both in the EU and in other international contexts.