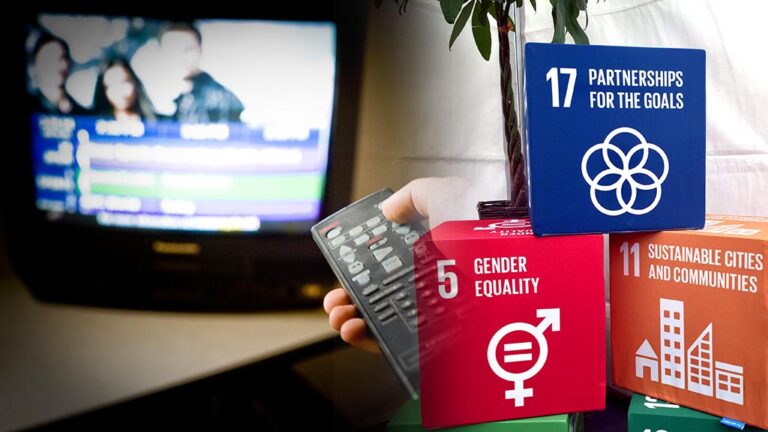 Collaborations between companies and aid actors are an important part of the global goals for sustainable development. The Somali company Horyaal cable TV collaborates with the Swedish organization Forum Syd.

Partnerships between companies and aid actors are a prerequisite for achieving the global goals. But how should poverty reduction, peace and climate issues be part of for-profit companies? Wilo Abdulle, who is participating in Almedalen Week this year, talks about how her company Horyaal cable TV works with the global goals in Somalia.

On Visby's cobbled streets, white tents and various scenes have been built in the summer heat. For a week, they are filled with political parties, authorities, organizations, media and companies that discuss current societal issues. Wilo Abdulle is on hand to attend a seminar on corporate contributions to Agenda 2030. She runs the company Horyaal Cable TV in Somalia, which focuses on getting women and young people into technical work.

Wilo Abdulle moved back to Somalia from Sweden during 2012-2013 and then returned to a country that was marked by many years of conflicts between different militia groups. When she moved to the capital Mogadishu, it was among people affected by the civil war. There were many internally displaced people and those who - just like herself - returned from different countries in the world. After working as a volunteer for a couple of years, she started up Horyaal cable TV in Kismayo.

- If you are aware of Agenda 2030 and work with these issues and do it as part of your company, I think it has a great positive impact on the company's development and on the local environment and society. Not just through a single lecture, but these issues need to be present every day, says Wilo Abdulle.

In 2016, the company had difficulty obtaining sufficient financing to cover the entire business. But after receiving support from the Swedish organization Forum Syd, the newly started company was able to employ eleven young people in a first round in 2017. Now they have received support for another nine employees and currently they supply cable TV to 4-5000 households in Kismayo .

A condition for the project support from Swedish Forum Syd was that Horyaal cable TV should pay attention to the global goals and Agenda 2030 in the local area. Agenda 2030 was hammered through the UN four years ago to fight the climate crisis, eradicate extreme poverty and promote peace and human rights. The seventeenth goal is precisely about how realization needs to be achieved through global partnerships - where all different actors, not least the private sector, are on the train.

- Business innovation, investment and responsibility are a prerequisite for the world's countries to succeed in achieving the global goals - traditional aid alone is not enough, says Suzanne Krook who works at Sida with the corporate network "Swedish Leadership for Sustainable Development" (SLSD).

Global partnerships are needed to fund the cost of the global goals. The UN has estimated that it will cost around $ 3000 billion a year to achieve the goals. But partnerships are also needed to work with climate change and human rights violations that occur in different production chains. Companies, large and small, thus have an important role to play.

Horyaal Cable TV works with the global goals by recycling materials used, combating discrimination and investing in women's participation in working life. In addition, the company works with young girls' safety in the workplace and in society when they go out and install the service.

Another important part of the company's sustainability work has been about creating a meeting place to discuss important societal issues. They do this by inviting households that buy their service and other companies to meetings. Wilo Abdulle also says that the young people who are trained and employed in the company go out and give lectures about their work at schools, universities and other companies.

- So it gives a snowball effect. When we educate and train the young people in the workplace, it spreads in the small local community, says Wilo Abdulle.

The company also works with local authorities, although in Somalia there is not such a clear dividing line between the private and the public as in Sweden. This is because stable authorities are still emerging. Horyaal Cable TV is part of a working group under the government that works to increase women's participation in business. It is also about creating meeting places to connect women with, for example, banks, authorities and organizations.

The corporate network that Sida maintains does not bring together Somali companies such as Horyaal cable TV, but only Swedish-based companies. But according to the evaluation as Sida has done this year, the SLSD network has also had a positive impact when it comes to creating bridges for dialogue and cooperation between the development assistance authority and business actors. However, the network has been criticized for being one "Discussion club" without concrete measures for companies 'sustainability work, and for not inviting trade unions to discuss workers' rights. But the evaluation assesses the network as a relevant initiative for the implementation of Agenda 2030 - and especially for the knowledge exchange it has generated.

Swedish Leadership for Sustainable Development (SLSD) was founded in 2013 by Sida and the CEO from several Swedish-based companies to include the business community in the process of developing Agenda 2030 and the global goals. The network includes 26 companies and various expert organizations.