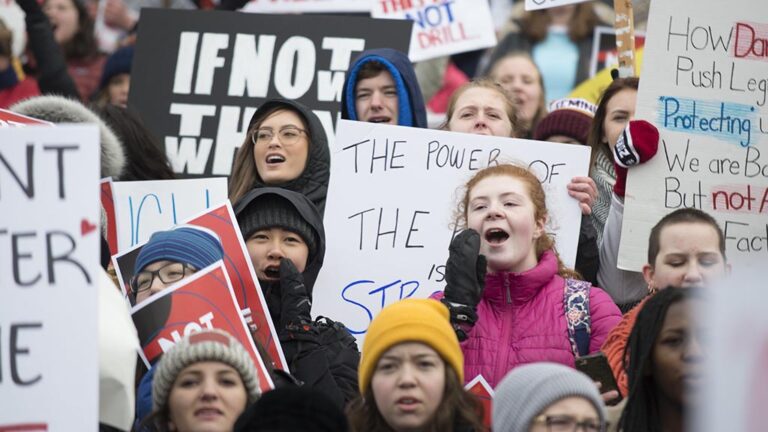 Young people can be seen in many demonstrations around the world, but they rarely become political representatives, the debater writes. Photo: Fibonacci Blue

According to the UN, young people have a key role to play in creating peace and security. Despite this, young people are rarely represented in politics. On the contrary, many young people feel frustration, hopelessness and lack of trust in their governments and the international community, writes Hanna Waerland-Fager from the Foreign Policy Association.

More than half of the world's population today is under 30 years of age. Nevertheless, they are often excluded from political decision-making - a problem discussed by the UN Security Council, the main international arena for peace and security. Resolutions 2250 and 2419 (adopted in 2015 and 2018 respectively) are the first of their kind to emphasize the importance of young people's participation and inclusion in building peace and security.

In the international work for peace and security, young people have long been considered a global security threat. For example, a common phrase is "Youth unemployment is an international security issue”, Where many young people without work lead to more violence, drugs and gang crime. In UN Security Council resolutions, on the other hand, young people between the ages of 18 and 29 are considered to be the key to the work for a peaceful and secure world. They are effective peacemakers instead of instigators of conflict. Although young people around the world are a heterogeneous group, with different backgrounds, perspectives and opinions, Resolutions 2250 and 2419 point to something extremely important - the right of young people to raise their voices, influence their future and participate in formal peace negotiations themselves.

Must turn words into action

Since 2015, the UN Agenda for Youth, Peace and Security has been developed at local, national and global levels. Through international aid, the Swedish government focuses on young people's participation and inclusion in peacekeeping work around the world. The Folke Bernadotte Academy (FBA) has also been commissioned by the Swedish government to analyze how Sweden can best implement UN Security Council resolutions. There are several positive examples, both in Sweden and in other countries, where the implementation of the resolutions on young people, peace and security has been taken seriously. Among other things, the FBA has gathered both experts from young civil society and representatives from UN bodies and UN agencies to turn words in the resolutions into actual action.

The work of strengthening young people's participation and influence on issues related to peace and security has only just begun. On the other hand, there is a lack of real strategies, both locally, nationally and internationally, for how the youth peace and security agenda is to be implemented in reality.

In conflict-affected Somalia, over 80 percent of the population is 35 years or younger. At the same time, the young population has long been exploited for the conflict-ridden goals of various terrorist groups. Few young people have the opportunity for education and jobs - at the same time they are excluded from the country's social governance and peace-building work.

In Israel and Palestine, young people are growing up in one of the world's oldest conflicts. Hate and threats are promoted but the work for peace and human rights is deteriorating.

At a time when more and more young people feel neglected and unfairly treated, it is not enough for young people's work during the Arab Spring, March For our Lives and Fridays For Future to be noticed. The knowledge and understanding of young people's role as peace builders needs to increase and the efforts for young people's inclusion and participation need to be increased.

Young people are required in politics

An initiative where young people themselves can express their views on how Sweden should work to implement and improve UN Security Council resolutions, is the ongoing essay competition organized by the Swedish Foreign Policy Association (the national organization for Sweden's foreign policy associations) and the People and Defense. Together, these two organizations create an important foundation for how young people themselves carry ideas for paths to security and peace.

The knowledge-disseminating work is also an important part of reaching the next step - the actual work of implementing the Security Council resolutions. An example of this is the thousands of young people who gather around the world to raise the security threats of climate change. Let us therefore take advantage of the voices that are now being raised and transform these into young people's real inclusion for political change - can 16-year-old school student Greta Thunberg engage a whole world, it is not much to ask at least to listen to what young people actually think , what solutions they have and what they worry about.

When young people open their mouths, the future speaks.

Resolutions 2250 and 2419 are two texts adopted by the UN Security Council. Resolution 2250 on Youth, Peace and Security was adopted in 2015 and is unique in that it was the first time that the Security Council recognized that young people have an important and positive role in peace-promoting work. Resolution 2419 was adopted three years later - during the Swedish Presidency - and focuses on increased representation of young people in peace negotiations and conflict prevention work.